A chaotic take on the classic destroy asteroids game
Submitted by Agecaf (@agecaf) — 1 hour, 37 minutes before the deadline
Add to collection 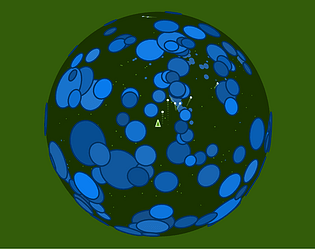 How does your game fit the theme?
Being "out of control" is the failure condition. Being hit makes it harder to keep in control. The situation is designed to become chaotic and more "out of control" as levels progress. Part of the music is generated reactively and semi-randomly to highlight this "out of control" situation.

So cool what you did with the audio. Makes me wanna try something similar... as soon as i learn how to do audio at all. Very inspiring, thanks. ^^

Thanks! I did decide to spend a bit more time on the audio than in other parts (eg completely sacrificing any proper/good UI), I'm glad people enjoyed what came out of that! I also like channels such as 8-bit Music Theory, I'm very interested in audio for videogames. This was my first time using Tone js to make procedural music like this, though I did use some ideas I had for a side project I'm working on related to procedural music generation.

I think it was worth sacrificing that. With the limited time of a jam, you often need to just be sort of minimalistic anyway, and not a lot of people focus on sound, so it really helps making the game stand out.

I really like this game. I love how the music plays to your shooting!

Thanks, I'm glad you enjoyed the music!

Fun game! I included it in my GMTK Game Jam compilation video series, if you’d like to take a look. :)

Thanks so much! We really appreciate what we do, good luck with the games!

Fantastic game! The is one of those games that takes a lot of common ideas, but combines them in a way I don't think I've seen before. It was a fun balance trying to shoot the balls without putting too many bullets out there. The graphics were also super polished and the audio very satisfying to listen to. The only thing I'd like improved would be for the game to automatically restart once you die. Good luck!

Thanks for your feedback! I've always had troubles adding menu screens, gameover screens and the like : / Good luck with the jam!

That's really polished! The music coming alogn with shooting, the satisfying split of enemies, the dreadful discovery that all of your bullets are still there dancing around, it all brought me to smiling! Really well executed.

Turning seems a bit slow (which I think was already mentioned), and I still haven't gotten past the fourth level, but overall a good game.

Is it the one that's on a Möbius strip? For anyone interested, if you glue a disc to the (only) edge of a Möbius strip (used in chridd's One side, One jump), you get the real projective plane used in this game. You can't do so in 3D space without self intersections, but that's a minor detail.

Thanks for your feedback! While turning being slow has already been mentioned, it's really useful to know how many people found this an issue compared to other things, so thanks for that! Difficulty is a bit unbalanced, I think there's some difficulty spikes, level 4 is probably one.

It's interesting, the fun part is when you are losing and struggle to maintain control, I just wish there was just a tad bit more chaos that didn't have to be induced by me.

I purposely spammed the shoot button to create a scenario for me that I could enjoy so I'll give it 4 stars!

Thanks for your feedback! Yeah, the chaos in the game is very situational at the moment.

Super cool, felt like asteroids, but a sequel. Hoping you develop more along this vein!

Amazing physics and game world, felt spectacularly responsive.   Things get very out of control very fast with the wrap around world.   Love the effects and ability to counter-act the acceleration.

Potentially could have a chance on hit to destroy a bullet?   Might extend the "play factor" I discovered once I had launched a certain number of bullets I could just sit back and watch the asteroids die while just fighting any bounces.

Thanks for the feedback! The idea was that every bullet would split into two, and those two would split into two and so on... For technical reasons that's no longer the case; there's only two generations of bullets (the bullets that have split won't generate more bullets). The bounces increase in intensity the more you're hit, so it's ok if you just use that to survive the end of the level, but it's a dangerous game to play at other times.

Sound design is top-notch here, the game feels so good to play because of it! All the dynamic audio you did with the varying tones of hitting the asteroids makes it such a satisfying experience. Of course there's the gameplay too, which is totally unique! Really enjoyed my time with this one.

Thanks, I'm glad you enjoyed the audio! I was trying various things here, one of those being an idea about semi-procedural music generation I've been thinking of. I'm quite happy how it ended up sounding!

this is a really cool idea! i like how you adapted the theme (going too fast makes you die),  the audio was nice to listen to, and the game is just overall quite fun to play. one thing that would make it more engaging would be to add more variance  between levels, since they all felt more or less feel the same.

Thanks for your feedback! Yep... I tried to make the levels feel different with the audio/graphics... but it's literally just reskins. I think I mainly wanted to give a feeling of progression instead of it becoming too monotone?

great game ! the movements are a little bit slow and I didn't quite understand when you die (I guess it's when you are touched by something while you're already out of control ?) I love the atmosphere that the sound and the vibrant colors create

Thanks for your feedback! That should probably be better explained; you die when you're moving too fast, getting hit removes the effective max speed and drag for a while, so it's easier to die then (Though it is theoretically possible to die without getting hit).

I´m really impressed with the audio of this game. It was an amazing sound experience, I can´t believe you made this in 48 hours. Not only that but the gameplay was pretty polished and fun too. Definetly challenging but super fun. I´m really glad I played this game. The only complaint I have it´s about the rotation, I barely used it throught the game, maybe because it was a bit slow or because it wasn´t comfortable for me to use the Q and E keys while using de WASD keys. Anyways, a solid entry and it deffinetly deserves more rates.

Thanks, I'm glad you enjoyed the game! In retrospective, the rotation should've been much faster, at the moment it is the same as the movement up/down/sideways, if we think of those as rotations of the sphere... which makes the rotation feel much slower compared to the movement.

Love the sounds and the minimalistic graphics! They work really good together, and the mechanic worked perfectly! Really fun, simple game that can get really addictive. Rated!

Thanks for that! I always think that the different parts of a game "multiply together" if they fit well with each other. This is easier to do as a solo dev, in my opinion; it's impressive when teams manage to pull it off!

This one is very unique and I love the sound design, the concept is a great interpretation of the theme. A very solid and well made game, great work!

I'll try to get a look at it tomorrow. I've been trying to review every game of the ones who've left a comment here, though I haven't been able to run a couple of them.

Thanks! A couple of jams ago someone complained about the lack of sfx, since then I've been trying to incorporate the sfx into the music, given that that's what I like the most. This time I incorporated ideas I've been having about procedural music generation!

Liked the concept and in execution, the game worked really well. Visuals and audio really helped to bring the game to life. I have very few criticisms with the game. Overall it's a good game that is deserving of a high rating, well done.

I'm glad you enjoyed it! I just noticed your profile pic is the main character of your game, it's a very cute sprite!

There's been few asteroid-like games I've played in this jam but this is definately the most interesting one! :O Becomes very chaotic very quickly.

Thanks! Asteroids-like games are not too hard to make, and there's plenty of ways to twist the tropes of the genre for interesting results. I also took inspiration from bullet hell games.