A retro-inspired adventure where you're never fully in control
Submitted by Adam Watters — 11 minutes, 23 seconds before the deadline
Add to collection 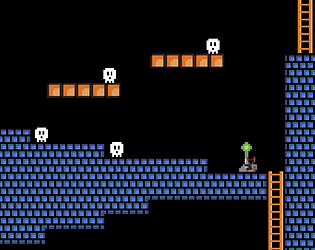 How does your game fit the theme?
An evil wizard has taken control of the game and can change the rules at will. With him around things are bound to get a bit 'out of control'

Fun adventure, really enjoyed it. The level design was good.

It would have been good to add the controls in a how-to in the actual game, it mentioned for moving on, and x for attack, but not the jump key which had me scratching my head a bit. Additionally I found that when you launch the screen, it has already started scrolling behind the title screen, so I died a few times to that.

Some polish though, and this would be really good!

Really nice aesthetic choice, like it as the old console games

Submitted
For his hopes and dreams
LikeReply
RedCrownSubmitted195 days ago

A genuinely funny action platformer. Plenty of twists and variations to keep the action fresh, plus some difficult platforming. Some music would have gone a long way to sell the feel, but a solid game nonetheless.

Really fun adventure! It's rare that we see so much content for a jam, this was three worlds and even a final boss. All were fun to play through, and interesting things kept happening. I'm personally biased towards music, so I will always recommend having a soundtrack, even if it's taken from opengameart if making music is not your thing. That being said, the sound effects were really good, and the gameplay was both challenging and forgiving, in a nice balance. Great job!

Really polished, really nice, with a surprising lot of mechanics! For a while I was thinking: hmmm but why is it out of control? Is it because the mage can't control you?

Then I got input-reversed head-first on spikes and toned it down a bit!

I really enjoyed the old retro style you have going on at the moment but the lack of music makes the game a bit boring. So I would recommend either making your own music or using free to use pre existing music. For making your own music I suggest using "Beepbox" as it's a easy to use free music creator that works in your browser. Hope this will help for your next game!

The game hardly fits the theme in my opinion. The camera movement is really annoying. I love the art style tho. The sword seems pretty useless, it doesn't have a sound effect and the animation is so tiny that you have to look closely to even notice it.

Nice game and I liked the old school art style. It was fun to play but there are a few issues. First of all, the game starts with the player hardly on screen which makes it almost impossible to start the game without dying early on. Another issue is the lack of visual and audio feedback. When I attacked enemies with my sword I didn't really feel like I was attacking anything which made the game feel a bit lifeless. That being said, you made a lot of content considering you made the game in 48 hours and the wizard character's text was a fun addition to the game, good job!

It seems I cannot jump :( I would like to try it.

Fun game! I included it in my GMTK Game Jam compilation video series, if you’d like to take a look. :)

A really fun little game really. I love the old school artstyle and the game play was pretty neat. I especially like how simple the controls were.

Background music would have really made this a wonderful experience and its a shame it didn't have any, but considering you made everything in 48 hours I feel it's understandable.

As for the 2nd, due to how little hp is lost when the boss attacks, I was more or less able to cheese the entire boss battle by standing on the top most platform and doing some simple dodges and spamming X fast enough. Some more boss variety in terms of attacks would have also been nice. (maybe having platforms disappear under you and such, it would play more into the wizard having control over the game)

i very love the game style but i think it just lack background music.

I liked the general feel and mechanics and really liked that a jam game had a lot of checkpoints and was hard without being overly punishing.

Lovely game, cool style controls and mechanics, only thing I would add is a funky retro soundtrack, other than that is was really cool.

Thank you for being generous with the checkpoints and the health. I actually managed to beat this one instead of getting frustrated and giving up. Well done!

Very fun and challenging.  I love the retro art style.  My only complaint is that the sword being taken away felt kinda pointless since I was never able to kill any enemys to begin with.

This game was really fun and charming! the presentation was nice too. Great job, would have liked some background music though

I love the style of this game! also the concept of the wizard is Amazing!

Submitted
It's Over
LikeReply
Nick MendozaSubmitted197 days ago

I really liked the concept of the wizard taking control and changing the rules. I also liked the old school visual style. I couldn't jump with space for some reason though so it became really awkard to try and move with WASD, jump with Z and attack with X. I ended up having to stop early on because i couldn't get the movements down. Would love to try it again when i can use space to jump because it seemed really fun.

Submitted
Into The Blood Room
LikeReply
Adam WattersDeveloper197 days ago

Thanks for playing. It was only after the deadline that I realised I messed up with the inputs, therefore it can only really be played with the arrow keys.