You're a slime ball. Your portal machine is broken.
Submitted by vogonCF, slackbyte — 29 minutes, 46 seconds before the deadline
Add to collection 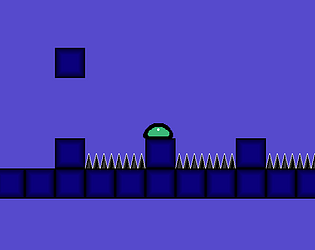 How does your game fit the theme?
In this platformer you don't control which level you're playing, or when you swap between the levels.

Very original concept, and well polished. I'm usually not good at platformers, but your game felt really good to play, I had a lot of fun. Good job!

This was a really well polished game with great game feel. I've not seen this idea yet this jam with the player going back and forth between levels. Great job! It worked really well.

Really neat idea! And the jump physics felt good, which a lot of similar games have been lacking. Great job!

Great idea, however the difficulty was a bit hard I guess. It became a little bit frustrating when I lost the progress and had to start the level again. But I managed to finish the game and I like the overall simple style, the slime jump mechanic and animation. Great submission!

it was interesting how it'd switch between different levels o:

Submitted
Too Many Bullets
LikeReply
AgecafSubmitted1 year ago

Really interesting! Great choices of sound effects. I like the main idea; it's well implemented. It felt like keeping track of the chainsaws between swaps was a bit difficult to calibrate for the player, everything else worked really well with the swap mechanic. I liked the slime art, and there seems to be a strong common vision of the game, great teamwork!

Very cool game! The switching levels mechanic is really good, maybe you could include powers that i have to get from a level to progress in another. Great job!

I really like the concept. Just that the frequent changes in scenes was sligltly annoying. May be changing scenes only during a critical step would be a good idea.

This game is really great, very fun idea and execution.

Submitted
Out of Control(s)
LikeReply
Lennert KoppeSubmitted1 year ago

Great, fitting and original concept! The razor blades did get stuck sometimes, but nice entry overall!

The concept is great, having to juggle between different levels and not getting in a bind when you switch back is the most interesting part of this game. The visuals are a bit plain and some of the level design could be frustrating, but it's a nice take on the theme.

Changing of the levels is a really interesting concept and take on the theme out of control. The game was fun to play, I really enjoyed it. The art and audio is nice. Good job.

Great concept with the switching of levels, really keeps the player thinking to remember where they were.

I enjoyed controlling the slime, it felt smooth and responsive, the only real point of critisim I have would be that it would be nice to have a way the player themselves can restart the level as the level would switch and I would know I was going to fail because it stopped above some spikes and I would have to play the other levels just to die and restart.

Love the name too!

I really dig the game idea and how it was actually a bit challenging in the later stages :P

Although i do think it would be really cool if the stages had a connection to each other, like some of them have buttons but then pressed they do nothing on the current stage but actually on the next one, like opening doors or maybe activating / deactivating traps! :D

Maybe one scenario being that one stage the slime is trapped in a death room with lots of traps to dodge while the other stage has the button to let it out.

Other than that, Great work slime buddy! ;D

Being out of control of the level you're playing is a nifty way to interpret the prompt. The chaos that ensues had me laughing at myself a lot.  I really enjoyed the challenge of your game, plus that little space slime is so cute :)

Interesting idea, cool. It was a forced attempt to suit the theme, but the game was not bad! haha

Music contributes a lot to the player's immersion, in a way.
This has the potential to become a more solid game, I recommend that you keep developing.

nice concept ,art is so cool and smooth