Kek has awaken.
Submitted by Sabiarts — 2 hours, 21 minutes before the deadline
Add to collection 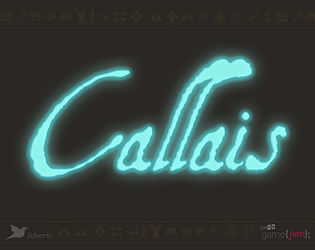 This game has a great feel to it. I really like the art/perspective of gameplay. Using the crystals as the switching felt a little awkward, but it wasn't hard to do -- just a minor thing.

It looks like you didn't rig up the credits screen! I went to look at all your names and didn't get to see them.

It was a little shorter than I would have liked, because the atmosphere was feeling great. I would love to play more levels. Great entry!

Thank you! We already corrected these bugs and added more levels, please follow us to see more after the rating period!

I liked the aesthetics and the music. Tutorial text doesn't fit the overall aesthetic all that much but that's nicely solved by using the same color for it so it doesn't poke your eyes right away.

I've had some collision issues (friction with the wall). That part doesn't matter for the jam, I'm just saying if you'll continue working on the game (which you should). Levels were rather easy even with the lights off. It feels like you're being challanged only one mechanic at the time which is appropriate for the theme of the jam, but I think it limits the game's potential. I'd agree with Team Horshead that combinations of jump and dash would make for more interesting challanges and that would in turn demand easier switching between powers which would lead you away from the theme of the jam. Good for the jam bad for the game. It seems to me that the way for this concept to shine would be to move a step away from the theme of the jam. Good for the game, bad for the jam.

Luckily, once the jam is over, the dillema is gone.

Thanks for the rich feedback! We're also having collision issues haha It'll be completely remade after the rating period. Now, about the game design decisions, yeah, they are really hard to make, that's why your feedback is so important. Since we are probably porting it to mobile and creating a "mobile first" design, the button's functions and layout are going to solve this problem. For the Web version I don't see any problem in using the mouse wheel or unlock the ability to use a button to change the crystal.

Really cute character design! And nice concepts! I think the diamond things at the side should be controlled by the mouse wheel so you can have more quick actions like a jump and then a dash straight after if you wanted harder levels, I really really love this game and I would love to see it further produced! Great job!

Submitted
Only One Recruit
LikeReply
SabiartsDeveloper2 years ago(+1)

Your game is really complex for a jam game, there is a lot of content! Congrats! (Nice animations and polishment aswell)

The idea is really nice. I wonder if it will work with harder platforming tasks like moving platforms, double jump and dash at the same time, or moving obstacles. However, game is well made and the levels show the potential of the idea clearly.

Great ideas! We'll try this on future versions (including mobile)!

The music was fantastic and the idea was really cool. My only feedback would be that the jump sound didn't really fit in my opinion, though it is a cool sound and could probably be used elsewhere in the game. Really great work though! Full marks!

Thanks! I agree with you, we're thinking how to improve.

Liked the concept, loved the visuals. That was fun!

Great game, it has potential to grow!

It's great, the level design really makes you alternate between the different mechanics, it works pretty well. Maybe the controls are quite confusing, maybe a key would been better to me more reactive, but otherwise, the result is really cool

Thanks! We're thinking about that, we don't want to be too easy neither make the player feel powerless.

This is pretty fun! Awesome sound design work with the game and the visuals are quite nice. I think the UI could use some polish, I had no idea that I could click on the crystal to move it and since it's such an important part of the puzzle mechanic, I would have liked it to be faster to switch. Maybe use the space bar or keyboard to switch between the abilities?

Thanks! What would you do to the UI? We're accepting solutions and ideas.

I can see why you mentioned sound, sound effects are awesome! I really like the one for simply changing the crystal too. Art is great too for such a short amount of time, well done!

Yeah, i agree, we loved changing the crystal haha

Your game is really fun! The sound design and screen shake are great. Please port it to mobile! If you don't want to, please consider talking to us, we would love to port it!

I really like the concept here! The suggestion by HedbergGames below to have all abilities triggered by the same button is an excellent one. Would love to see this idea expanded out!

Nice, thanks for the feedback! Follow us for new updates!

Excellent game! The controls and collision detection are a bit wonky in places but I loved having to maneuver between the 3 powers to get to the end of each level. I also really liked the graphic design and the color pallet just clicked for me. I could totally see you expanding this to a larger affair.

Thank you! We already have a better version waiting for the end of rating period. Please feel free to follow us to see more!

I have found the generator. It was cool being able to only power one ability at a time.

Submitted
Lurking in the Dark
LikeReply
SabiartsDeveloper2 years ago

Fantastic game... hope this will grow  among the community...

Interesting game. The idea of swapping your moveset is pretty unique, but I feel like it would make more sense if the double-jump and the dash used the same button: then the crystals would be controlling what action that one button does, rather than feeling like an arbitrary limitation.

Thanks for the feedback! The mobile version is just like you said! We'll post it on our page after the rating period is over, so please follow us for more!

I really like the idea behind this game and could see it moving forward in to something bigger with more complicated puzzles to solve.  Controls/Platforming would need to be tightened up though, as it didn't feel quite right.  Great job!

Thanks Edocsil! Follow us to play newer versions after the jam ends! We're trying to improve the controls.

I like the artstyle a lot, the controls feels a little strange, specially the jump. But the style and the concept are really cool!

Submitted
Cat Food For One
LikeReply
SabiartsDeveloper2 years ago(+1)

Thanks! We're working on that!

The dev mentioned elsewhere in the comments that they learned a lot from GMTK and it shows here!  Lots of good, iterative level design based around their core mechanic and while I sometimes had to do a double-take to be sure I wasn't in the same room, I was pretty pleased with how well the game was teaching me things and reinforcing its lessons.

On that central mechanic, I'm definitely a fan. Trading mobility for information is a compelling cost of doing business and I find it hard to criticize this game overall.

Thank you for the feedback! Follow us to play a longer version after the rating period ends! Your game lives up to your account's name hahaha congrats for the originality!

Cool idea ! Cool game !
I was stuck on the second level until I realize the main mecanic !!
I guess I do know how to read haha.

Some interesting LD can be made out of that :)

Submitted
The only NeOne
LikeReply
SabiartsDeveloper2 years ago

Haha nice! Thanks! We are creating new levels for next week, follow us to see more!

Cool mechanics and a very effective tutorial. The movement felt a little bit stiff at times, and I felt like I was falling too fast. Good entry for the game jam!