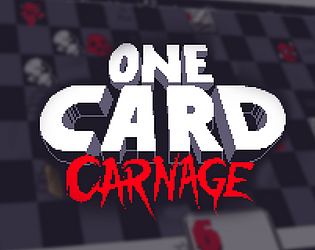 I really like the concept of the game, and it's very polished/rounded up for a jam entry, congrats to the whole team. If I were to suggest something I'd suggest to make the card mechanic more controlled, the way it is right now the player can reroll the hand as many times as he wants.

Thank you! Yes the card mechanics were very rushed to meet the deadline and I totally agree that they could use some tweaking.

This is a really slick game and very cool. It would be nice if there was a little more indication of what the effect of a card would be before playing it. I still have no idea what the fireball is supposed to do except create flames that run around the board randomly and kill me. It would be cool if killing enemies could unlock new and better cards. I think its really fun and I hope that you keep working on it.

Thank you for the kind words! We wanted to- but we unfortunately did not have time to incorporate a way to inform the player of what the cards do.

Very cool idea, and a a very cool looking game! It felt too random for me, and I think it could be awesome if it leaned just a bit more into the puzzle game feel, making levels that are handcrafted with specific cards and specific enemies, as that way every decision would feel like it has more weight, even when it's just waiting in place.

Thanks! This idea of handcrafted levels and tailored decks sounds like an interesting idea for sure! :D

Negatives: I'm not exactly sure how this fits with the theme. Perhaps it is because I'm not familiar with common card-based games, but I'm not sure how using only one card is significantly different than usual.

In addition, a larger screen size would be nice.

Submitted
Greedy Pirates: Only One Can Win
LikeReply
gentlemanSubmitted2 years ago(+1)

I love this small turn-based survival action game. Once you get an understaning of the enemies and the cards' functions, you will get in a nice flow that musica helps to solidify. This game is good for relaxation and spending your time. This would be a solid phone game. From nitpicks I only have a wish for an ability to have a bigger window size.

Submitted
Where is my 2nd dimension, gentlemen?
LikeReply
Elias KiaSubmitted2 years ago(+1)

Helloooo I don't know if you're aware but you're on the front page of RPS right now:

Thanks for the heads up!

To be honest, I suck at this. However, I like the core concept a lot. Are you gonna work on this later? Because this can be easily expanded upon. Nicely done!
Check our game! https://cerosware.itch.io/one-stick-shooter

Hahah Thanks man! Yea it's a tough & fast game  And we probably should expand upon ( not sure when though )

Nice game, that is origanal use one card i like the is relatively fast

Super nice game! I included it in my GMTK Game Jam 2019 compilation video series, if you’d like to take a look. :)

It's an clever and interesting crossover! At first i was confused about the gameplay and took me a while til I understand how it works. But however it feels good and I had fun to play it. Great work here! Well done!

Thank you! 😁 Yea we did not have time to implement propper a way to explain the systems.

Sorry about that! I'll write up more detailed rules & controls on the page right now haha and appreciate the kind words :D

This is an awesome game! I meant to play it yesterday, but just got to it lol. But I really like this game, I think I'll keep it on my desktop to play when I don't feel like playing anything else. Simple but it becomes more challenging later on.

Really polished and fun to play!

Overall polish and presentation is 5/5 audio, visual and UI all go together. For a 48Hour jam this is a great short look at a game.

The one thing that I found a bit hard to understand is the card collecting. I think I understood you could use monsters to destroy boxes, and get more cards, but sometimes that didn’t seem to work and once I ran out of cards I found myself running around until some popped up again. Maybe if the cards respawned after a while in your hand, and collecting cards would give you extras? (like you get 3 after having none for 3 turns, but only get 5 if you pick them up).

You can draw new cards by right clicking 😃

I love the smoothness and graphics for sure! I get a Crypt of the Necrodancer vibe from it! Very good!

That's what we were going for! Thanks man :D

Really nice. Interesting concept to draw on the wait.

Oh Hi Cake!
Cool game you've go there, nice polish, good sound and nice gameplay!
I have to admit it was a bit confusing though. Enemies seem to move along with you, but they can also move while you're idle. I was kind of hard to know where the enemies were going. the infinite drawing was confusing too.

Did best by running away and attacking when opportunity came (rather than actively hunt and flee) but I still wasn't sure I "got it". I think instructions would have helped. And unless I misinterpreted the gameplay, I think one auto draw per move would have simplified things.

We had issues finding a good draw balance and the right click draw was a quick fix to try and make a somewhat fun gamplay loop.

I personally would like to look into changing how the cards work in future itterations.

Hey Joh, how've you been! Glad to see you also joined this ja, your game rocked o:

And yeah, you're absolutely right, we didn't really have time left to add some proper instructions, so the game can be unclear sometimes

Hey! I really like this mechanic, and would love to see more! My only problem with it is that the window was way too small :/

Thanks, I agree that it was too small. A fullscreen option would have been nice 😅

Great concept and well polished ! But it it got a little far from the theme .

Submitted
IT'S MINE
LikeReply
JustFredrikDeveloper2 years ago

Thanks! The Initial idea was closer to theme but when we played it, it wasn't enjoable. So we changed things up to reach a more fun experienced but strayed from the initial idea as a result