An FPS with One Shot, One Level, One Exit
Submitted by Fire Plant Games (@fireplantgames) — 11 hours, 50 minutes before the deadline
Add to collection 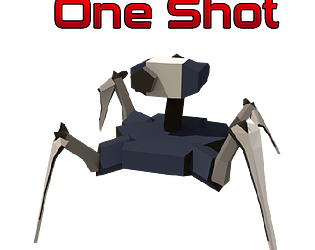 I felt a lot of autoaim on the enemies which made the game hard from the beginning. Also how the bullet move coupled with the camera controller made everything a lot more complex  which could be toned down by slowing the speed a bit and make it move a bit more physically.

Submitted
The only NeOne
LikeReply
Tapehead GamesSubmitted1 year ago

It was short and for the short amount of time also fun to play. But there are couple things which would benefit from more clarity, like the lifebar. It seems that there are two health states, one for the bullet and one shared for the robots? The other thing is that the orientation is a bit unclear. It would be cool if there were some markers on the walls or the floor to indicate in which direction I've to go. Nice entry :)

Each entity has its own health bar :) it was originally in the plans to have a health bar display over the robots, unfortunately we didn't have time to make it in. This probably would have helped clear that up. I agree with your feedback for sure. Thanks for taking the time to play the game!

This is excellent! My only objection is that I feel like it would benefit from a bit more checkpointing.

That's a fair point! Glad you enjoyed! If we had an extra day there's lots we could have done with that time. Thanks for playing!

that was challenging. But it was fun when you got control of the robots and did the slow mo shot. I feel it was a bit too fast paced. Maybe if you had more health or something. But overall liked the concept and rolling around as a bullet is fun.

Definitely would have liked to have more time to put more difficulties in. We had a ton of fun making it though! Thanks so much for playing!

Pretty fun to weave around enemies and take single shots. Smoothing out the reorientation of the camera after shooting and possessing would make it feel great. Cool entry!

Thanks for the advice! Definitely agree!

This game has a really nice flow. Kinda hard, and haven't been able to beat it. Really love the core concept, and it's a great take on the theme.
Check our game! https://cerosware.itch.io/one-stick-shooter

Took the bet to play without reading any instructions, after i few tries i found out how to enter a bot, after that the difficulty wasn't too high, completed the whole thing in my first try, but it was really great and intense, it is quite polished and rushing to an enemy, trying to make a shot worth it is a great feeling.

I'm not sure i really understood how the health worked, do i have a different healthbar per robot ?

The only thing i found was a bit underdesigned was the levels, when you play you're really moving in all the directions, you're getting in robots, which have their own orientation then you spawn back in bullet where you shot, it is really easy to lose orientation, and several levels i didn't knew where the next part was, so i went back a little before understanding where i was, so maybe some kind of map or objective compass or something could help a bit with that.

Also i'm almost sure the buttons spawned an enemy but again i didn't really understood what happened, try doing like in the portal games, where the buttons have either a symbol or a visual "cable" type of thing to connect them to whatever they do.

Anyway, had a lot of fun and the gameplay feels great, very good job !

Thanks for the feedback! Level design definitely would be more intuitive if we had some more time to work on it :) lots of good advice here as well. Thanks for taking the time to play!

Dude, so frickin awesome. My only disappointment is that I couldn't get any further than I did. But I pushed on for quite a few runs, and made great progress. It felt so cool absolutely wrecking areas that I had had difficulty in earlier. And I loved the speed of everything. It made restarting each time feel so much better. Good job.

Thanks a ton! If we were to ever continue working on it we'd definitely develop more of a learning curve. Thanks again for playing!

Hold it right there buddy. The learning curve was amazing. First time I passed no rooms, then one, then two, then three and so on. I think your curve was perfection, giving the player a bit of new each run. And with each later run I developed strategies that helped with earlier rooms, almost speed running them. Maybe a bit more of the issue was that robots that you possessed could start off damaged and die the moment you possessed them, which ended a few of my later runs.

Good to know! Thanks for the feedback!

Really cool twitch shooter idea, slightly reminds me of quake in a way. The camera is a bit wonky at times and you can get disoriented by where you teleport to,  but other than that this is really well executed.

Thanks! With more time we definitely would have aimed to make things a bit more refined :) We appreciate you taking the time to play!

This is super good. It's hard to describe, but the game's design and controls are just really intuitive: I didn't see any controls tips (though I didn't read your game page or the About menu either, so I probably just missed it), but it took  very little trial and error to get a pretty good handle on the game, and this really weird mechanic was pretty intuitive to use after a while! Big props on the design here. The robots look really really cool as well, the animations are excellent, and the music drove the game well. Overall, probably the best submission I've seen. Really good work.

Thank you so much for the kind words! We really appreciate it! We're glad you enjoyed the game.

LikeReply
V I R T U _Submitted1 year ago

Really original. With some more work put into it this could be really amazing game. I really like the idea of being single bullet that rolls around the level. Great work!

Great game!
This is the first game I've come across that reminds me of my own in a way. It's wildly different of course, but the element of switching characters to reload was something I came up with as well

I adore the idea of a playable bullet possessing robots. In the robots I literally felt like a glass cannon, which was exciting! I did find myself getting lost a little, and did find myself wishing for full WASD bullet movement, but those are minor nitpicks at best.

Up with the best games I've played so far!

Thank you so much for everything you said! We greatly appreciate it! Improved bullet movement was in the pipeline, unfortunately due to time constraints we weren't able to implement it in time, all in the process of learning though!

congratulations bro! you have gained yourself a fan...

all the best for the rest of the jam
return the favor by Trying mine and leave your feedback: https://itch.io/jam/gmtk-2019/rate/431948

Thanks for the kind words! Will definitely check your game out when I get home!

I really like games that do frantic action well, and yours certainly does! The slowed time and zoom in effects on shooting were a really nice touch. I did have some trouble with the mouse controls disorienting me a few times. It probably has something to do with the camera rolling forward or backward when moving, which makes it hard to see where you're going.

Thanks for taking the time to play our game! If we had more time we would have loved to invest more in both the difficulty curve, and like you pointed out the camera controls. Next time we'll try fit more polish in! Thanks a ton for the feedback!

Too hard for me. Maybe a few easy levels at the start or more checkpoints (are there any?) would have been nice. But it is fun to play once you get the hang of it!

Thank you so much for the feedback! I agree that the difficulty curve starts pretty high. Ideally if we had more time we definitely would have resolved this with more friendly level design. Next time we'll do better! Thanks for playing!

Awesome! Really glad you enjoyed it!

Couldn't finish level 2, but the mechanic was pretty nice.

Hello! Sorry about the difficulty curve being a bit high, definitely would have built around the mechanic with more time. Thanks for playing!

Thank you very much! We had a blast making it! We'd greatly appreciate if you left a rating if you haven't already!

wow pretty cool! i didnt have any idea what i was doing at first. i didnt realize the controls were in the about page. sometimes i would posses a guy and die instantly casue two bots shooting at u at once. But i love the concept.

Thank for the words! With more time we definitely would have liked to invest in a more crafted difficulty curve with some more polish and QoL improvements. We definitely appreciate your feedback! If you haven't already we would also love if you gave the game a rating!

Wow, very cool, I love the feeling of killing an enemy. Great work =)

Thanks for leaving your feedback! This game jam was a ton of fun to do! We figured that shooting being the largest part of the game, we should try make it as satisfying as possible! If you haven't already we'd greatly appreciate if you left a rating!