Only Juan in SpaceView game page

A platform game with only one platform - but you get to move it!
Submitted by Ivan_ss (@Ivan_ss_), Pedro876 (@pedrocasas876), adrvapor, Martín Ariza (@MartinAriza_) — 2 hours, 20 minutes before the deadline
Add to collection 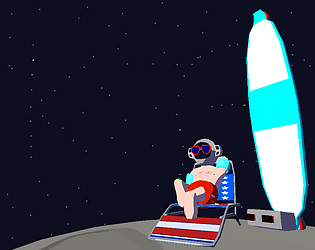 Only Juan in Space's itch.io page

After a couple of rounds I started to feel like what I was actually playing was a brilliant co-op puzzle all by myself, which sounds a bit sad. I still had lots of fun though, definitely felt like my brain was trying to split in two from all the multitasking which only made beating the levels all the more satisfying.

Submitted
Lurking in the Dark
LikeReply
adrvaporDeveloper1 year ago(+1)

i did not think it could be a coop game, maybe not with this control scheme but great idea... I'm glad you found the Game satisfying, thank you for playing! And yeah, we will check your game out as well ;)

Collisions between the surfboard and the walls sometimes don't work properly and the board gets stuck :S

That said, the idea is really cool, the puzzles are interesting, and hard, and I like little details like the GTMK spelled in the background.

Thanks for the feedback! Yeah, we would've liked to refine the surfboard's movement, but we ran out of time. I'm glad you liked the concept though!

Such a nice idea and so well made! :) I like the setting, the art, the sound, the puzzles and the design! Juan is cool! Love the OH YEAH! :D Feels good!

Thank you very much!! I'm glad you had a great time playing

Really enjoyable! I caught a bit of this game on a stream and had to try it out.

I would say the difficulty was fair, I would've actually liked the levels to get a little harder but I've played a lot of games with lunar lander style controls and I imagine that would come in future levels! I found myself mostly using my peripheral vision to track Juan while I focused mostly on the mouse/platform movement, which seems backwards from what I was expecting, but worked well for me.

I also found myself flinging Juan with the platform and that saved a ton of jetpack fuel.

The only gameplay thing that felt a little "off" to me was how slippery Juan is on the platform when moving it left to right. I'd prefer to have him remain pretty firmly stuck to the platform unless flinging him.

The level with the 3 horizontal lasers was especially fun. I'm curious to see what new mechanics you could come up with if you continued work on this. The platform control is perfect with the mouse and there's something really fun (imo) about only having binary control of a thruster. Also you made a game that feels very complete and fleshed out, with good visuals and sound effects, which is always a challenge in a jam!

Maybe later levels could have penalty for touching the platform to the walls too, to add to the anxiety.

Wow really awesome feeback thanks! We'll look at the slipperiness issue and maybe update the game when the rating time is over, I tried to fixed during development but I couldn't. That idea of punishing the player for touching the walls with the platform is plain evil, I love it lol. Btw could you give the link for the stream?, I really enjoy watching people play the game. Thanks again!

Great feedback, thank you soo much!! As the level/game designer (mos), I'm really glad you liked the mechanics and the difficulty! It's nice that flinging the character was something you thought was useful, with the second level's design we tried to teach this and I'm really happy you understood that you could give Juan momentum with the board :D

About Juan being slippery on the board, yeah, it felt off to us too... We tried to fix it making their physical material's friction very high, but while it kinda made Juan stick to the board if you moved it slowly, it made fitting through tight gaps with the board very frustrating because it would get stuck...  We would have liked to come up with a good solution for the problem but we didn't have enough time, so if we keep working on the game and release an enhanced version, this will be one of the things we'll try to fix.

I'm relieved that you didn't find it difficult by the way... At first we were going to give just 3 seconds of jetpack to the player and you could juuust beat the levels, but many of the people who tested the game said it was a bit unfair, so we changed it to 4-5 seconds. And even with that change a lot of players found the game difficult! Not everybody has the same skill of course, but I'm happy that somebody found the difficulty was fair ;)

This is a kinda tricky puzzle game, the board moved slow which was a bit frustrating but it works.
5/5

Thanks for playing! We needed the board to go slow so it can be controlled nicely in the narrow corridors but we could try to speed it up in the more open areas.

It is realy good work i hope that more player try it.

We haven't played many games from the jam yet, but so far this one is the most original, extensive and pleasant. Really a damn great job, two thumbs up! Consider padding it out with like 10-20 more levels and add some polish here and there. Maybe a tablet version? Again, love it! :)

The visual is NEAT, the OH YEAH and the music were really nice too! I enjoyed the concept of the game, although I think it's a little too hard! The walkthrough really helped me out. Congrats!

Submitted
By The Blade
LikeReply
Pedro876Developer1 year ago(+2)

Yeah maybe we should've made it a little bit easier as many people are struggling to complete it too. Thanks for playing!!

the music is sunday by otis mcdonald ;) he makes great free music!

i'd like to know what you found too difficult when playing the game, was it knowing what to do to get through the level, or controlling the character/board?

thanks for playing our game!

I think both of then. The multitasking is not in my skill set 😅 I think the level design is great too, just takes a time to really understand how to control the character, the board and think how to pass trough the level at the same time.

yeah, with so many games to play there's not much time to master the mechanics of any of them! but we would've liked to make it more intuitive to move the character and the board... but the multitasking is a crucial part of the game! maybe a smoother difficulty curve would've been nice as well, but there's only so much you can do in 2 days 😅 thank you for providing feedback!

Nice graphics and I like those gmtk stars haha! I have multiple monitor set up  tho so my mouse cursos didn't stay inside the game, sadly so I couldn't beat the game.

Submitted
It Devours Our Souls
LikeReply
Pedro876Developer1 year ago(+1)

Ouh Yeah! Cool game, this really has some potential. Cool music. Didn't like the handling of the platform as much.

I'm glad that you liked it! Could you please tell us what you exactly didn't like about the platform? Thanks for trying it! :)

the mouse movement to platform movement was not a 1:1 translation. I guess you are checking if the mouse is moving down and then move the platform down at a constant speed. Could be wrong.

yeah, it wasn't 1:1, there's a top speed so that giving momentum to the astronaut is easier (otherwise it'd be too easy to throw him too fast), we're using unity's mouse X and mouse Y iirc. we wouldve liked to refine the surfboard movement much more, and maybe include a sensitivity slider, but we didn't have enough time... thanks for your feedback!

It does not follow the theme in a very original way (one platform), but taken as a normal game it has a very interesting idea.

The execution is good and the character is very well done.

Thanks for the feedback, glad you enjoyed it!

Really creative game! I just think it's too hard. I didn't get finish the second level. Maybe the force applied  by the surfboard in the Juan could be less strong.  Graphics are amazing, the atmosphere make me feel alone in the space haha. Congratulations!

Glad you liked it! As you said, we were afraid that it could be a bit difficult for some people, but feedback is always appreciated. Thanks for your opinion!

I really liked aesthetics of the game. The concept is really interesting and creative. I like the way i can throw Juan upwards using my right hand to save fuel.

The levels I played were interesting, but i got stuck at level 2. (I am not very good at multi tasking, I think I need an extra brain to be good at this game.) I especially liked the surf blocker wall idea. It spices up the game a lot.

I really enjoyed playing the game. Thank you for making it!

Thank you for trying it out! We're really happy with how it turned out both on looks and on playability. It's really challenging to give Juan juuuust the right amount of momentum to complete level 2... There's a walkthrough in the game's page if you'd like to see what the rest of the levels look like. I'm really glad you liked it :D

Awesome game great fun to play, a triumph in under 48 hours

Thanks a lot! We agree, we couldn't believe how good it came out for being made in 48 hrs. Cel shading does a lot xD

Love the floaty movement too btw, made me really feel like the game was taking place in spaceeeeee! ;D

Submitted
There can only be ONE
LikeReply
adrvaporDeveloper1 year ago(+1)

haha, nice! that's what we were going for, i'm so glad you liked it that way! ^^

Submitted
The One Technique
LikeReply
adrvaporDeveloper1 year ago(+1)

that's so great to hear :D thank you!