It Devours Our SoulsView game page

Stealth Top-Down game with a short story for GMTKjam 2019
Submitted by Fiskyfisko (@fiskyfisko) — 10 hours, 9 minutes before the deadline
Add to collection 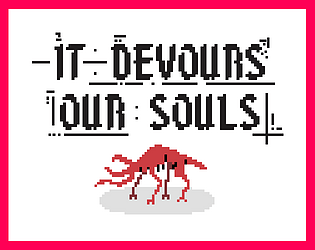 It Devours Our Souls's itch.io page

Ranked from 181 ratings. Score is adjusted from raw score by the median number of ratings per game in the jam.

Creepy game! I included it in my GMTK Game Jam 2019 compilation video series, if you’d like to take a look. :)

My favorite game this jam so far. I LOVE the art and color design. Sound design is crisp and satisfying, and the one bullet mechanic is a good amount of pressure!

I kinda feel bad for slaughtering that monster. You've done a great job of creating a deep story with very little time. I loved the world, I loved the atmosphere, and I loved the monster. I'd like to hear more.

If you have the time please play and rate my game:

Very cool atmosphere! Sometimes I'm not quite sure why I get cought. Seems a bit unforgiving, or maybe the feedback needs to be better.

Really good game. It's almost a full game waiting to be released. Level design and execution are flawless. It's very Original since we haven't seen many stealth games, but it is true that there are plenty of "only one bullet".

Congratulations and I hope to see it packaged as a full game soon.

With great design and implementation of the theme, "It Devours Our Souls" is a fun little stealth

I really like the aesthetic and the feel of the game! Pixel art is super cool!

First off, I gotta say the atmosphere is on point. The amazing color direction really sells how threatening the monster is meant to be, which also makes the switch in power when you get the gun very satisfying.

That being said, the games loses a little of its charm once you start understanding the systems that are in place. The monster moving on a fixed pattern without any wiggle room made it feel less scary. Also, the lack of a clear indicator on the enemy's vision radius made it feel somewhat unfair when the players gets spotted by a turret that doesn't look like it should have seen you.

There's also a lot of missed potential on what happens after getting the gun. I expected the game to be really serious about only having one shot to kill the beast, but since it moved so slowly and you could usually kill it from a distance, there wasn't enough of a chance for me to miss for that possibility to actually be worrying.  Maybe it would be interesting if the monster became faster or changed its pattern once the player got the gun.

Overall, I think the premise has a lot of potential, I hope you keep working on it once the jam is over. Good luck!

I agree, I could have put more stuff and patterns in the game, still had like 10 hours left but I thought it's good enough and shipped it.

I already have some plans how to improve it post jam.

Easily one of the best I've play this jam so far.

A stealth game is a very good surprise in this jam, would love to see it developped into a longer game. I love the attention you put into the story telling too.

I didn't take it into account while rating but I had a small bug where the window wasn't aligned with my screen and I couldn't see the top and left and couldn't aim at the bottom and right. Surely comes from my pc though.

Thank you! That's my fault, I hardcoded the game to force 1920x1080 resolution so if your monitor is lower res, it messes up some of the visuals. Realized that too late haha.

Hahaha Mistakes were made. 5 stars tho, good luck :)

Great aesthetic! The tension that builds to getting the gun and the flip in power from the enemy to the player is very well presented.

I found the stealth mechanics a little off though, particularly on the third level with the eye - I got repeatedly caught out by the creature, expecting bushes to break line of sight for the creature as they do for as the eye... unless the eye just has a smaller detection radius lol

Yeah third level is quite hard, They actually have the same detection object.

I guess I could show it, here's the detection object, for funs:

I love this game. it's really eerie and unsettling, but is still fun.

the game uses some really good pixel art, and the sound effects are also great. that scream is gonna haunt my nightmares. the small story is also really good.

the game controls amazingly and responsive. i never had a problem with them.

the gameplay is also really good. i like the stealth mechanics, although it took a while before i realized how they worked (but that's on me, as i barely play stealth games).

the game is pretty short, but it is the perfect length for this type of game. i'd love to see what you make next time!

Thank you! happy that you liked it.

The stealth mechanics are spot on , i really enjoyed the hiding gameplay with the tall grass, and the levels felt varied especially when having to deal with the "Sentry" enemies as well as the first introduced monster, the aiming also was spot on and precise, with quite nice feedback whan you score a hit.

The atmosphere is absolutely great, the pixel art is really well done and the monster design is really cool and strange, the minimalist approach really adds to the surreal vibe, and there's a good sense of pacing with the introduction of different things slowly one by one, and i liked how you sprinkled the story bits as well. I won't spoil it but also neat climax to the game.

Don't know what i could say more, i found it really well done so Congrats !! :)

This is a beautiful and satisfying game.

This was so great! The graphics and the sound design are really spot on! The final moment of firing your one bullet is the perfect way to peak the tension at the end of the level. Great stuff!

thank you for your kind words!

The payoff when shooting the monster is REAL! The low freq bass sound is genius and adds a sense of foreboding to the game. Nice work mate.

This must be a finalist. Again, when it ended, i wanted more. Well-designed, loved the stealth mechanics, loved the one bullet thing, loved the story. You go man!

dude i really enjoy your game it was awesome hahahah, i think the art and the music were very good too

Thanks a lot man!

Quite an interesting game with pretty artstyle and fun gameplay. I would really enjoy some more levels and more mechanics, but I can imagine the 48 hor stress. Really enjoyed playing this one. Good job!

The art for this is great! I found the stealth a little difficult to interpret but the loop of finding the gun and then making the shot with your one bullet is fun!

Happy to hear you had fun!