Run fast and get energy!
Submitted by SmoothTrooper — 2 hours, 6 minutes before the deadline
Add to collection 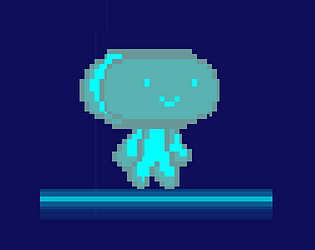 Needs quicker restarts (any key instead of a click-button). It's a fun game I've spend half an hour playing it but I still have to rate and review other games.  The font in the main menu is terrible but thankfully you don't spend much time in the main menu.

Using just the keyboard for the game then the mouse for restart results in unnecessary extra arm movement.

Before the first battery on a platform, a battery in the air with no platform under it would have given your player a chance to test out the jump without risk of ramming into the platform, and thus given a better idea of what timing would be needed before testing your player on timing.

The early two pits with a narrow platform between gives, by my admittedly flawed calculations measured by playing with one hand and taking screenshots, 1/6th of a second from when the second pit shows on screen to when the character needs to start jumping. Given that the jump has a slight delay between pressing the button and the character jumping, I'm not convinced that challenge is fair. And that's before the issue that the battery on the platform sometimes interferes with landing.

I like it, Tho the font isn't the best and it sometimes doesn't detect jumps but still pretty cool as a first game

The character animation is really good and I like the music and sound effects too. I've also created my first game for this game jam so and this is a really good game for your first one. Good job!

Preatty good game for the first time! Good dynamic and fine art, nonetheless, don't use that font in the future, it looks awful.

Submitted
One Spear, One Kill
LikeReply
LonefoeSubmitted1 year ago(+1)

Some of the jumps are really hard to perform especially when you move so rapidly. I liked the music and visuals. The game's cool and with more polish in the mechanics it will be even cooler!

Some feedback: Changing directions is super hard to do as the acceleration carries over.

The music in this game is really catchy! I do agree with some of the other commenters: the controls feel slippery, and I think this game could definitely use a "late-jump" mechanic. A lot of platformers have some forgiveness built in where you can still jump a little after you leave the platform. That small assist would probably go a long way in a game like this (where you accelerate to such high speeds.

I also think you could have leaned into the theme a bit more (i.e a one-button runner). While making a one-button auto runner wouldn't have been the most original idea, I think it could have helped you focus your design a little more by taking the directional aspect out of the game/controls. That said, I think this game is a really solid start to game jamming! Nice work!

It took time for me to understand that I can change direction.

Submitted
One color. One direction. One button. One life.
LikeReply
FuretttoSubmitted1 year ago(+1)

Cool music and art even if the writings aren't easy to read.

As almost everyone said the controls need some polish but overall a pretty cool game.

Submitted
Only One Tower
LikeReply
HarrisonGowlandSubmitted1 year ago(+1)

I like it - as others have said, polishing the controls as the player gets up to speed is defo an idea for future work on this game, but the sprites are cute, the premise is clear and other than slight delay on the jump button the controls are pretty solid :) The only other point I would add is that the background parallax sprites are a little janky as you run which might be a case for smoothing the camera movement slightly? I'm not sure haha

Either way you've made a cool game

thanks for the comment! Yeah I didnt use 'LateUpdate' for the background movement creating the parallax effect so it jumps a lot (little oversight)

nah its all g gamer, live and learn :) the game's really good, keep it up

Lovely song, character is super nice! Some polishing in the controllers, specially jump when starts to get fast would improve gameplay a lot ;)

Thank you for the compliment on the song (I am proud of it) and I felt the jump was a little weird when its fast too, maybe a higher jump

The idea is great, but I feel you could have executed it a little better. Things like the initial speed of the player or have the player start with full energy would give a little more time to get the grasp of it.

Not really seeing the theme connection here either.

Like I said, your idea is fun and has great potential (quite addicting) I just don't think you delivered at its fullest in here. Also, great job on the camera work.

Thanks so much for the feedback! The low battery start was my feeble attempt at following the theme as an 'only one' second of battery per battery collected

Submitted
One room, one minute, one nightmare
LikeReply
SmoothTrooperDeveloper1 year ago(+1)

Thank you!!! the camera zooming out as you get faster was something I decided I NEEDED in this game ahahaha it took ages to figure out

Submitted
IT'S MINE
LikeReply
SmoothTrooperDeveloper1 year ago(+1)

it was supposed to be the battery life, each battery give you 'only one' extra second

The idea is not very original and the execution either.

However being able to load a game that works well is a great achievement, congratulations.

Way too hardcore for me but I love the camera shift when you change direction. I love the pressure feeling. The idea you have to know the level by heart to out-perform your past self is something I'm loving as well.

Too much love for this game!

I'm not sure about "Only One" but really great experience anyway.

I'm curious about what you'll make later if this is your first game! :)

Cool game, cute art. But sometimes there is no enough batteries in the beginning.

Submitted
I HAVE NOTHING BUT 1'S
LikeReply
SmoothTrooperDeveloper1 year ago

That happens sometimes its weird I think its to do with the Update method. If the executable is running to slow the game thinks youre running slower. Because the battery level is based on time sometimes it breaks the game

Oh I see, it's still good though

The only little thing I'd see to it is that the camera can be very confusing when changing direction, but otherwise it's really nice!

Fun game, but I thought a bit hard to jump. And I also noticed if you realease right button, player stops running almost instantly. Maybe you could add some smoothing to make character stop to feel more fluid. Anyway, it's a fun game!