Shooter but you don't control the ship!
Submitted by azure2s — 5 hours, 14 minutes before the deadline
Add to collection 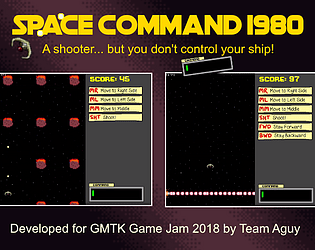 Fun concept! Controlling the ship with commands was interesting. I agree with others that the FWD/BWD controls were introduced with a bit too little time to react (at first I didn't even notice "FWD"), so extending that time slot would be nice. It may also be interesting to introduce more "program-like" command sequences, for example, `mm & wait(1) & sht`. Overall, nice work!

Oh, that's really taking out mechanics, hahahaha.
I really liked music, sfx and art, but struggled with commands. Perhaps if you give more time for players to get used to the commands would be nice before you add more commands.
But it's still a nice entry.
Cheers!

Super well done! All of the elements work really well together and it's all communicated really well to the player. I especially like the instructions being written on scraps of paper, as if they're being left for you by some passive aggressive office worker.

The one problem I had was that the font choice made me confuse the D in FWD with and O. And there was so little time to experiment with that command before the enemy kills you that I didn't type it in fast enough when I figured it out.

It's like a shmup combined with a text adventure - I love it! Doing things by typing the commands is weirdly satisfying, and I like that you gain more and more commands. I only wish there were some way to continue using different commands - maybe a life system, or different levels where you're allowed certain commands. Every time I died I would start over and immediately want to shoot stuff, only to realize I couldn't. Awesome game otherwise :)

I love the gradual introduction of new commands - it's well taught. My design criticism is that the command-line interface, despite meeting the theme, doesn't really add anything interesting in terms of design. For example, in QWOP, removing intuitive control of the player creates hilarity. In Space Command 1980, it's certainly clever and well-implemented, but I'm not getting what it adds in exchange for what it takes away.

Regardless, it was clever and fun and I enjoyed playing it! Thanks for making it!

This is good. Good introduction of commands too. I say work more on player feel feedback but good job for a  weekend jam.

Nice idea and it was executed well! I like how you get more and more commands; making it start off simple but then get complicated. That reminds me of portal's design.

I think it's a little annoying to start from the beginning; but my game had that problem even more lol. Also, it could use a bit more juice. Maybe some good old screenshake?  Really good job!

This was surprisingly good! The addition of new actions during the game was unexpected and thrilling! I got a score of 139 but I'm coming back for more :)

Wow. nice one. can't believe you made this in 48 hours

For me it failed at the introduction of the shooting mechanic

You can go checkout my entry it will be very nice if you rated and left a feedback.

Another game that I thought would feel repetitive with time, but the design of it keeps things growing and interesting. Checkpoints would be nice (I know it's score based, but it's more interesting with more commands), but otherwise really solid work.

I think there should be perma checkpoints you unlock to start your next run from. So you enter START SHT to start from where you get the shooting mechanic.

That's an interesting idea that not only solves the replay issue but also makes use of the mechanic in doing so! I like it.

Cool idea! I had fun playing it.

Holy Sheet! THIS IS A VERY GOOD AND POLISHED!
I really enjoyed it!
If only you can make a stage start with all the options unlocked after doing the "tutorial" part-like, It would make the repetitiveness of this game more fun! but still a solid 5/5 for me!

Submitted
The Girl, Wisp, and a Dream
LikeReply
azure2sDeveloper3 years ago

Thank you very much for the praise and the feedback!! This means so much to us. :D

Even as a programmer, I had some trouble on the later stages of the game. I really like the "tutorial"on the menu and how the game only shows a few commands on the start and gives more and more later. Nice variety of enemies also.

It made me want to see how this game would e if it had even more things on screen lol.

Well, the game design is nailed.

However I feel like the way the game looks before playing it does not give it justice, possibly affecting the number of people that will play your game(?)

But well, it was fun. Thanks for this!

Way better than anything I could have made. Overall I think its a great game for the time that you had. The theme not quite sure I just saw it as a normal typing game but it was really fun. Good luck with the jam!

Great game and execution on the concept! Definitely a good entry to the jam!