A bullet hell, but you can't dodge.
Submitted by Pace (@PaceSmith), BlizzieM, June B, chloe spears (@tvwolfsnake) — 4 minutes before the deadline
Add to collection 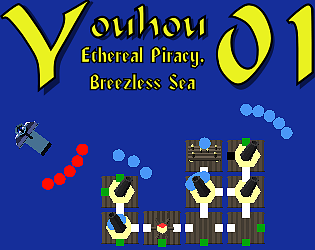 Good game. Maybe add a setup time during the first few seconds of the game. A really fun and intense game at the same time. Good job!

I really liked the idea as it felt like a tower defense meets a shooter puzzler like experience I just found it really easy to die and not fast enough to repair the parts that were damaged. Also, not being able to protect all sides of the main platform that needs to be protected is something I recommended reviewing because a few times I was shot down almost instantly without having enough time to barricade myself.

Having said that, I really liked this entry and it has great potential that with a little refinement and balancing could make a really fun game maybe even a great mobile experience. Great job!

Cool idea! I found it a bit hard to predict which pieces I'd have next, which made it difficult to react in time to the bullets without feeling like I was just randomly placing tiles. Perhaps a two-phase "build then fight" process might be interesting to explore? Overall, well done! :)

That's really funny, because the idea of building your ship to replace dodging came from a board game called Galaxy Trucker where that is exactly how the game works. One phase where everyone builds their ship within a time limit, then the second phase where everyone's ship runs through a gauntlet of meteors and other space hazards and you can only hope a small part of your ship makes it through.

Really fantastic idea and a lot of fun, but once I'd got a critical mass of cannons and shields going I found it got quite easy, and it felt like the piece placement could have required more strategic thinking than it did. The good news is I don't think you have to change too much to get that - maybe add some more types of tile and make the placement a little more restrictive (less connectors maybe), and you're on to a winner here!

I won after a while - and I kind of felt it wasn't a rewarding win - as in, I didn't feel like I deserved to win that. That's good - but also bad.

That's good because your game has a CRAPTON of potential! It can be a super addictive game of rapid thinking and foresight - and honestly, it may very well work as a commercially viable game. I can see it polished and put on Androids or somethin' - it really is great!

But that's bad because you made a game that lives and dies by its balancing - and it really shows... because it lacks it. I mean, I'm sure you struggled with it most of the development cycle, but the thing about this game is that it's clear that it's extremely hard to make it fair and balanced. Stuff like possibly getting 4 "shields" and not being able to put them correctly (being forced to depend on the fifth slot), stuff like the shots' hitboxes, and even very abstract, core issues like: If the ships are going to shoot from the side and shoot before even entering the screen properly, it's literally almost impossible to defend from that or to mount a defense that both encompasses left, right and top, specially considering the random aspect.

It's really, REALLY tricky to balance it, I can see that from a mile away. But everything else - idea, execution, jokes, scope - everything is top notch. I really think it's a game worth working into after the jam. Well done! :3

Thanks so much for your excellent feedback! I'll add "drag unwanted raft pieces to trash" as something to consider for post-jam development; that would also fix the 4-shields problem.

> The concept is very unique and has much potential. I did enjoy it a lot! Although, I must say that some balancing has to be done. I felt like the best way to win the game is to just place as many parts as you can on the board rather than really thinking about the positions of the different parts (there is also no time to think too much about the position). I feel that the game has to be balanced around strategy as it is the main mechanic of the game.

> The music and sounds are appropriate for the pirate-y theme of the game. The art is also good, but could still use some improvement if you do plan on working on this game beyond the jam.

Overall one of the most unique ideas I've played in this jam. Nice job!

Thanks for your feedback! I agree with your criticism of the "mindlessly rush" strategy, although a poorly placed shield piece can block you into a bad configuration.

The art is actually fully rendered 3d, and it looks really cool if the camera tilts. Maybe we could get a nice graphical improvement just from tilting the camera angle slightly.

But innovative and unique is what we were primarily aiming for, so I'm happy to hear your feedback that we hit the mark in that regard!

LikeReply
Swords and Flowers3 years ago(+1)

Fun and challenging, but frustrating that you can't start with armoring your core immediately. The first ship that comes in can immediately undo all your work and put you at a full disadvantage.

Thanks! I suggest starting off by building only on the right side (since that gives you a bit more time to prepare for the first bullet) and being sure to keep your connectors open so you can hook around to build a tile, hopefully a spiky raft (can take 3 hits) in front of your helm. With this opening and a little practice, I can win about 50% of the time.

Since we didn't have time to create a tutorial, it does throw you into the deep end (so to speak) right from the start, and I agree that can be frustrating.

Very fun and challenging game with an awesome concept that manages really well to replicate the franticness of classic bullet hell despite the lack of movement.

The only thing that slightly bothered me was, as other pointed out, the fact that it relies a bit too much on luck at some times, but it didn't stop me from really enjoying playing this.

Submitted
The Eternal One
LikeReply
SolAZDevSubmitted3 years ago(+2)

So, the game is really difficult and sometimes it feels like its luck based (I mean, it might be?) but you gotta act quick, this is a fun game, one I could pour hours if not days to come  up with good stratergies

This feels a little too reliant on luck for me. It's like, "when will I get that part I need?" and the answer is "never" half of the time.

But I still find myself enjoying this game, frantically placing down the parts I need to defend my ship. It's actually really fun, and to that I say, GG no re

EDIT: Either I'm getting luckier or I'm wrong about the luck.

EDIT 2: On second thought (literally) it is too reliant on luck for me

Q: Why is the name of this game so strange?

A: Because we think we're funny.