A fighting game without any health.
Submitted by Zcheio — 31 minutes, 47 seconds before the deadline
Add to collection 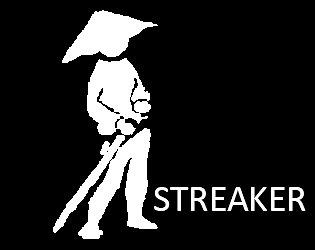 I loved it!  Very fun!  It would have been nice if there were more movement options in order to bait the opponent out.  Trades seemed to happen too often.  Regardless, it was still awesome :)

Great play on the theme: One of the best, takes away a critical element and refocuses it; game feels solid as is, but some form of progression in AI difficulty would have made a lot more playability for me.

Solid aesthetic. Nice take on the theme. Feels challenging to play against your AI and making those combos. However, for a fighting game the telegraphing and animations were missing and I think that hurt the gamefeel of the fight.

very good game i liked the animations very much also the idea is very good i liked this smart twist of health and score well done.

you can go check out my entry it will be very nice if you rated it and left a feedback.

Simple game, but the idea of using landed hits and combos to score damage instead of a health bar is very cool. I'd explore it further, maybe even in other genres :)

Its a super cool and flavorful idea! Makes you feel just like an anime character. Once I understood what was going on a little more, I ended up just button mashing to break the combos, which made the game quite trivial. I'd recommend instituting some kind of cool down between button presses to prevent that. Also, a walk animation would have been nice, seeing your character just float around feels a little weird, but alas, 48 hours. Overall though, I thought is was a very original concept that you executed quite well on.

Really interesting twist on the fighting genre. I found the idea engaging but a little hard to execute combos, I think I need to play it a little longer :)

I love the concept.

Cool idea with a good execution, I like the attack animation, It gives a good feeling. But I'm pretty bad at it, I get curshed by the AI

Just like street fighter, I didn't like it, until I understood it. Good game and Good luck.

Hope you got the chance to try out my game. Thanks :)

A cool game, the flow when the combo start is pretty weird, but with a friend it's getting much more funnier and random ! Unfortunately, we never do more than 4 hit but,well, it's good tou!

It was a cool game. I was really bad the AI whooped me pretty easily, I think I was starting to figure out how combos worked, I was struggling  with it at first (probably due to lack of feedback). But I think this is a very good game which could be worked upon.

Submitted
Box in a Box
LikeReply
TeeMan4 years ago

Kinda struggled in this without much feedback and was thoroughly stun-locked a few times haha. Having a local co-op game to share with my missus was a surprise though, thank you!

I'll keep this in mind thanks for the feedback. Hope you two had fun playing!

Fantastic concept. It needs more feedback, though. Sound would have worked wonders for that. Still, it's designed well enough to be interesting. Kinda want to see it expanded. Good job!

Nice game! Like how you can combo slashes until it gets parried or broken! like how you added player vs player in it too!

Submitted
The Girl, Wisp, and a Dream
LikeReply
Echodonut4 years ago

Cool combo concept! I feel like the stagger and stagger-break mechanics could be really interesting. If it was more visually distinct/clear what was happening (stagger, etc), that may allow the game to be more fast-paced, which would be interesting.

Thanks for the feedback! Hopefully I could do more next time.

Nicely done overall! :) I had fun playing it.

Good concept, who need  health when you have score.