A shooter without bullets, GMTK Game Jam
Submitted by RayMag — 1 hour, 42 minutes before the deadline
Add to collection 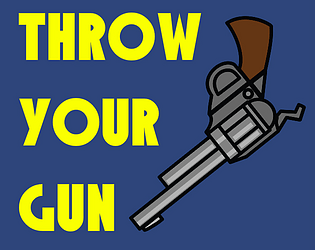 I loved the initial "aha" moment of this. The animation is great, throwing the gun feels appropriately silly. Unfortunately I quickly got stuck in the opening area... there isn't nearly enough time to step on the button and then run out of the area, leaving my gun on it... well, it leaves my gun in the opening area, so I can't do anything useful after I get out. My last idea was to try to throw the gun onto the button _outside_ the area while the blocks were intangible, but there isn't enough time to do that with any accuracy either.

I like the ominousness of them silently wheeling towards you, especially when you hit a stationary front one and you have just lost your gun. 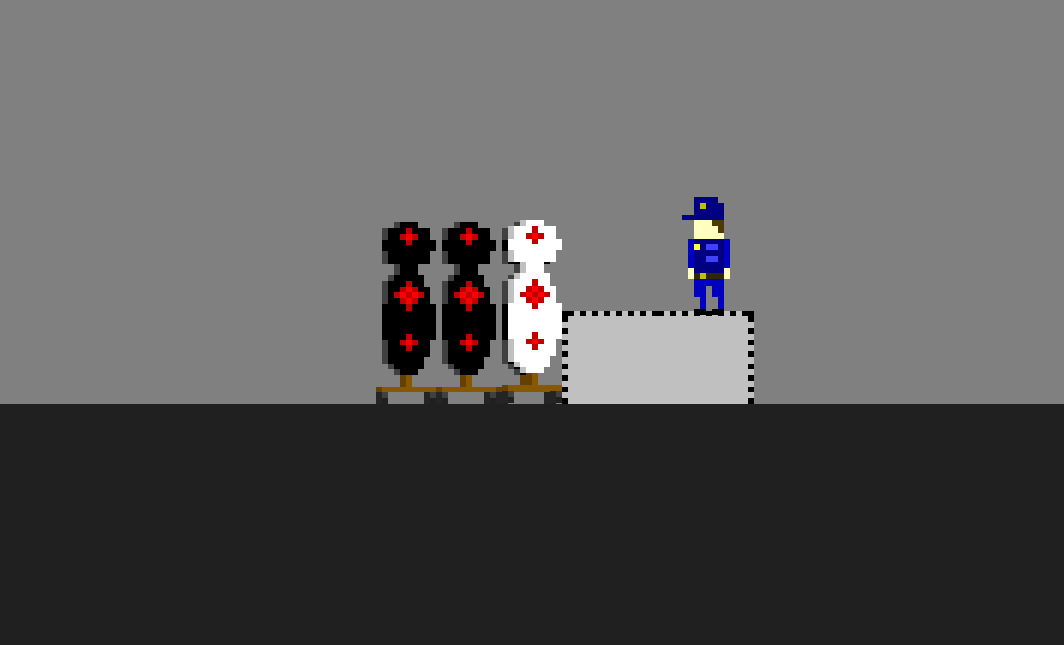 I had the last guy join with his friends which made it a bit trickier but I got to see your cool ending :)

Awesome I am glad you played all the way through, thank you for playing!

Really cool concept man!  It was fun to explore, but I did manage to trap myself between two of the blocks on the lower level.  Regardless, it was fun :)

Great concept with solid execution. I really like the idea that you have to pick up the gun.  I think it could use a few more scenarios where throwing the gun puts you in an awkward situation and you have to scramble to retrieve it. All in all, a neat little game!

I couldn't figure out where to get the blue key but all in all seems like a pretty cool mechanic, nice work!

I didn't explain this because I wanted to see if it players could figure it out. But you just had kill every enemy to unlock the blue door. Blue points lead to a blue score to unlock a blue door. Thanks for playing :)

But more seriously, it was a ton of fun trying to figure out the puzzles. The mechanic and game design work really well together !

Submitted
The Eternal One
LikeReply
azure2sSubmitted3 years ago(+1)

Amazing concept! For some reason it feels good to throw your weapon to enemies lol. With more polish this could be something big. :)

I liked it! I know some people thought it wasn't enough of a lack-of-mechanic, but I think throwing the gun adds a nice twist where after you shoot you're helpless until you get your gun. I wasn't able to finish because I hit a bug in the area with the dark enemies where I threw my gun to press down the red button but got stuck in the wall when it went solid. I'll probably go back to it later to try and finish but I got a bit frustrated and ragequit xD

* The enemy types could be distinguished a bit better, e.g. the ones with wheels could also be a different color to make it easier to tell whether they'll move, same with the ones that raise up when you throw your gun.

* Some checkpoints would be really nice for people who are terrible at games like me :)

* The puzzle at the beginning has a very short time window for running and getting out -- maybe I approached it wrong but it always took me a couple tries to get out, and coupled with always going back to the beginning when I died it got pretty frustrating.

Overall, great concept and with a bit of polish I could see myself really enjoying this!

thank you for playing and I appreciate the comment :)

Hey man nice game!The first few seconds got a laugh out of me right away, Solid execution, Overall real nice!

It feels like a work around to the jams requirement of being a game in a genre without a mechanic. Your gun that you throw is effectively a bullet, you use it to kill enemies and progress by throwing it. It is not a bad game at all, its quite fun, however it just feels like it isnt removing the mechanic of its genre just twisting it around.

Respectively by your definition, that means over half the games in this jam shouldn't count. "Don't take genre and mechanic too literally" is actually what Mark said in theme announcement. Here is the video link and time stamp if you need it.

Thanks for rating. Good luck.
LikeReply
M,SARHANSubmitted3 years ago(+1)

The up and down enemy was fun to trick i was throwing my gun, great game! Just wished it had checkpoints

Submitted
The Girl, Wisp, and a Dream
LikeReply
EquusGamesSubmitted3 years ago

Really clever game and way around the mechanic resurrection.

Nice work - fun theme, I think it could make for some nice in-game storytelling. It was interesting how different enemies reacted differently to the throw - it'd be interesting to see more of that!

The execution could definitely be better, but it's still really fun!

Nice Sprites! I enjoyed the throwing mechanic, but found it a bit unintuitive to understand how to open the doors to the left of the starting area :o

Very good game, I enjoyed the different types of enemies and all around theme. This is a funny way to approach the game jam theme, and I think it made for a very good game. I also really liked the Easter egg you added.