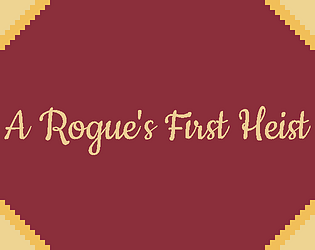 How does your game utilize the limitation and theme?
A Rogue has to infiltrate a building, collect all the treasures, and then return safely to the start to win.

(Other than general-purpose custom code)

If you did any of the optional challenges, explain how they were used:
Two-Button Game Jam: Only use the LMB mouse to control and the mouse to click.
Anything Goes Jam: It is a digital prototype.

I found a bug where enemies tries to go for coins that they shouldn't have tried to get, but overhaul a really fun game!

I'd like If you checked out my game if you had the time :)

I would be happy to check out your game.

I want to try and keep this as fair as possible, but after 10-15 of trying I just couldn't get past the first level. The art and music was really good, but as of difficulty it was unforgiving. I think giving some sort of range or visual indicator of their range of sight would be a huge plus here. Unfortunately, I can't add much more as I couldn't experience, what looked to be, an awesome game.

Yup vision cones are implemented in our current build which should help with the gameplay.  Thanks for playing however!

I tried a lot, but never get pass the first level, is really hard, 1st guard always found me.

love the art and the style, I really want to try the other levels but is really difficult the first one.

Could you check my entry? I'll appreciate it, Thanks

I would be happy to check out your game.

Punishingly difficult stealth game with a neat concept, without direct control of the player and that same indirect control mirrored with the guards, but a lack of feedback from actions made things feel too random and awkward.
-My favorite part was the way you're captured in a cage, makes that failure state feel very sharp.
-However because failure feels so out of your control, that sharp ending felt too punishing, instead of engaging.
I think a lot more feedback needed to be given to the player. What range/where can a guard see a coin to be distracted by (I tried experimenting with them a lot but just couldn't get anything that felt consistent, and sometimes I was sure they just ignored it. If they indicated they were/were not following the path of a coin that would have helped at least).
And to have your player be tracking the same coins as the ones you're placing for the guard seemingly, to have them also without any indication just start moving if they haven't been following coins around them, it added up to an awkward immeasurable balancing act. I'm impressed by anyone that even made it through the first level.
It could be fun to play even with a similar level of difficulty, but for that difficulty I think the player needs to have far more information and feedback to work with while playing.

Yeah vision cones are something we are working on right now to try and help players with a better understanding of the limits that the guards and player has. Thanks for playing however, hopefully when this jam is done you'll be open to checking out the updated version that we plan to have.

I really liked the concept, but the game itself is very hard. I couldn't even pass the 1st level. But, I mean, that very common in jam games (including mine...), and other than that it seemed like a very good idea. The music and sprites are very nice too.

I was playing the web build and noticed weird yellow lines, glad I decided to download game and play pc build. It was very cool and fun game to play, way too hard though. The enemy had a long range view and they turned pretty quick, but other than that it was very well made. Congrats on your entry.

Yeah the web build was a moreso last minute thing, we really couldn't be certain it was going to be as stable as the actual executeables. Glad to hear switching over to it helped you out. Difficulty is certainly the main complaint that we've been getting and its something we look to fix in the "final" game.

Thanks for giving us a look.

Judged this game on stream for the" Judges Choice" award. https://www.twitch.tv/efmi_ Tuesday 29th at ~ 3h 30min

Thanks for letting us know. And thanks for playing!

this game was quite challenging but also vey fun! Great job!

It'll be nice if you check out our game too😁

Actually already did, even reviewed it and left a comment. To be honest my frog logo probably blended in.

The first level was so hard that I couldn't even get past it. Other than the diffculty I liked the art, music and the concept of the game.

Difficulty is certainly something we are looking to actually ease into in the "updated" version. So its less of slamming into a brick wall and instead a gradual climb.

It seems like a fun game, but a really difficult one. I wasn't even able to get past the first level.. Art looks good and music sound nice. With a bit more polish and maybe a little easier difficulty, i think it'd be a great game! Might just be me being bad, not sure

Nah, most certainly our difficulty really spikes at the first screen. Thanks for playing!

This game is hard, or i am a loser. Nice art, good sounds. Nice job.

Its most certainly it being hard. ;)

I enjoyed the Art, the music and the concept :) this has good  potential but as Helper Wesley mentioned. the  random movements   caused me to be frustrated at the game and close it instead of enjoying the challenge and wanting to get better.  this could be a great game if you figure out a better mechanic for your movements and distractions or even remove it

Yup that is certainly something we are planning on spending time on cleaning up after the jam is finished. Thanks for rating and I'll be over to also rate your game.

Alright, so the concept is unique and interesting, the sound and music are nice, and over all the game looks nice.

But, I have just one big ol complaint.

Your characters movements are randomized to an extent. Each run my rogue got caught just a little differently, with the second guard being in a slightly different position. One round my rogue even made it all the way to the knife without me doing anything, got there on their own because of rng.

If you're going to make a game that is this hard, you can not have any randomness. It pushes the game over the line of just being unfair.

dually noted. Thanks for the feed back. They are randomized. After the jam is over we already have quite a few patches that should make the game much more enjoyable :). Thank you very much for you input we had basically no time to play test and make it more balanced. We had enough fun with this, that we want to share it with everyone in a fun and enjoyable format. I'd recommend trying again a week or so after judging ends!

I would love to play it again when it's gone through a couple of balancing patches.

I do think the concept is great. :)

I'll be sure to let you know! I'm going to post a devlog on the game page describing all the updates.

I thought it was a really fun panic mechanic (I just made that up but I'm sticking with it!) to have your player and the guards attracted to the coins. Super unique idea that was really fun to play around. Understood what I needed to do from just reading the web page's instructions so no worries there on understanding the game. The difficulty bar is set pretty high right out of the gate though so would be better to ease players into it. Some feedback / suggestions if you plan on building the game up after the jam:
Reduce guard line of sight on the player or increase guard angle for noticing coins.

Hope your team had fun making the game because I had fun playing it! Great submission to the jam, cheers.

thanks for the feedback! We are planning to add some improvements after judging ends and we can update again!

Wow, that was a tricky game. Love the mechanic bit and it would work really well on a mobile. I'd suggest dialling the difficulty down a little for the first level or two. Maybe try and use the initial levels to teach the player the basic tactics.

Other than that loved the music and sound are good and I like the look of it. Nice game

Yeah, the difficulty is one of the main gripes we keep getting. All of the levels were made in the last day of the jam so certainly in the future we will be working on making sure that more of a focus. Thanks for your review, you'll probably be seeing one from us as well!

Nice job! I thought the mechanics were super unique, there's a few rough edges but overall it's a solid game.

I love the idea behind this game! Unfortunately I couldn't find all the treasures cause I collected some multiple times. I think you should prevent that.

Submitted
Marley's Trip to the Moon
LikeReply
mewbusiDeveloper2 years ago

Too hard but pretty fun.  I gave up on the first level haha.  The only thing I didn't like was that the player would start automatically moving if he was standing for too long!

It seems to be a love it or dislike it mechanic. Thanks for your review!

You're not kidding, that is a HARD game. Fun, though! Great implementation of the theme, would work well on mobile I think, if you wanted to take it further.