Glad you enjoyed it, I really enjoyed making this one. 👍

There is so much I'd love to add to this game.

It was sadly made back when I didn't know much, and the code is an absolute nightmare. So updating the game would be more trouble than it's worth. 😅

I really enjoyed this little game.

If you gave the player a campfire lightsource and maybe some torches to add to the ambiance, you'd have a real winner here. 👍

And check to make sure the resources Z-order is always below the zombies. I had a moment where I almost lost because they were hidden under the resources. 😅

Inventories are hard to make for everyone. 😅

Lol. I've hacked together a lot of things too. No worries that it's not a simple effect or anything. From your description I can probably tell how your transition works, so no need to share the files. 👍

And thanks, I'm glad people follow my work at all. 😅

What do you mean your editor doesn't work anymore?

Love that scene transition. How did you do it?

And if you don't mind me suggesting....

If you slap some Z-sorting in there, to adjust the Z-order of things based on their Y position, and then edit their collision boxes to be a square at their feet. You would have a much more convincing top down look.

Check out my game Surtr, for what I mean. 👍

That is so awesome! I love hearing people's stories that come out from this game.

Sorry about the text fade at the end though, that's not supposed to be so sudden. 😅

Thank you again for making this!

I used it to make my little clicker game look a little nicer:
https://helperwesley.itch.io/energy-supply

Glad you enjoyed the game, and thanks for the sub. 👍

I've actually already made all of the changes I was intending to make for the game. But if I do ever go back and rework any more of the game, I'll keep an eye out for more feedback about the wizards. 👍

That's a good solution for it. 👍

I've written down a bunch of the feedback and I'll see how much I can tackle this week.

Not sure I'll get to controller support, because I didn't plan on it from the start, even though I know that'd be great for a lot of people, I'm not sure squeezing it in would be possible without a lot of reworking. 😅

Video is out now if you haven't seen it yet. 👍

Thanks for giving it a thorough look over. Appreciate the feedback and I've got your game saved to give it another playthrough once I get time on the weekend. 👍

I plan on giving it a single pass up tweaks based on feedback, but that'll be all. I am supposed to be working on a bigger project that I kind of forgot about because of the jam. lol

I plan to keep adding to it over time. (slowly, but surely)

Ok, well I'm glad I left the best for last. This game is great.

The falling section was golden. And that final fight is pure joy. I beat the game in 1 run, which means the balance is great, and I appreciate the carrots getting dragged by the screen so you're always carrying health with you to use to top up.

Complaints:
-The chase sections could have used a little more variety.
-Less control while in the air vs on the ground made precise platforming frustrating.

The story is established quickly and you get right in to the game play. 👍

I liked how it was a grid based platformer, I don't think I've ever played anything like that. I became more of a puzzle game than a platformer, which was neat. 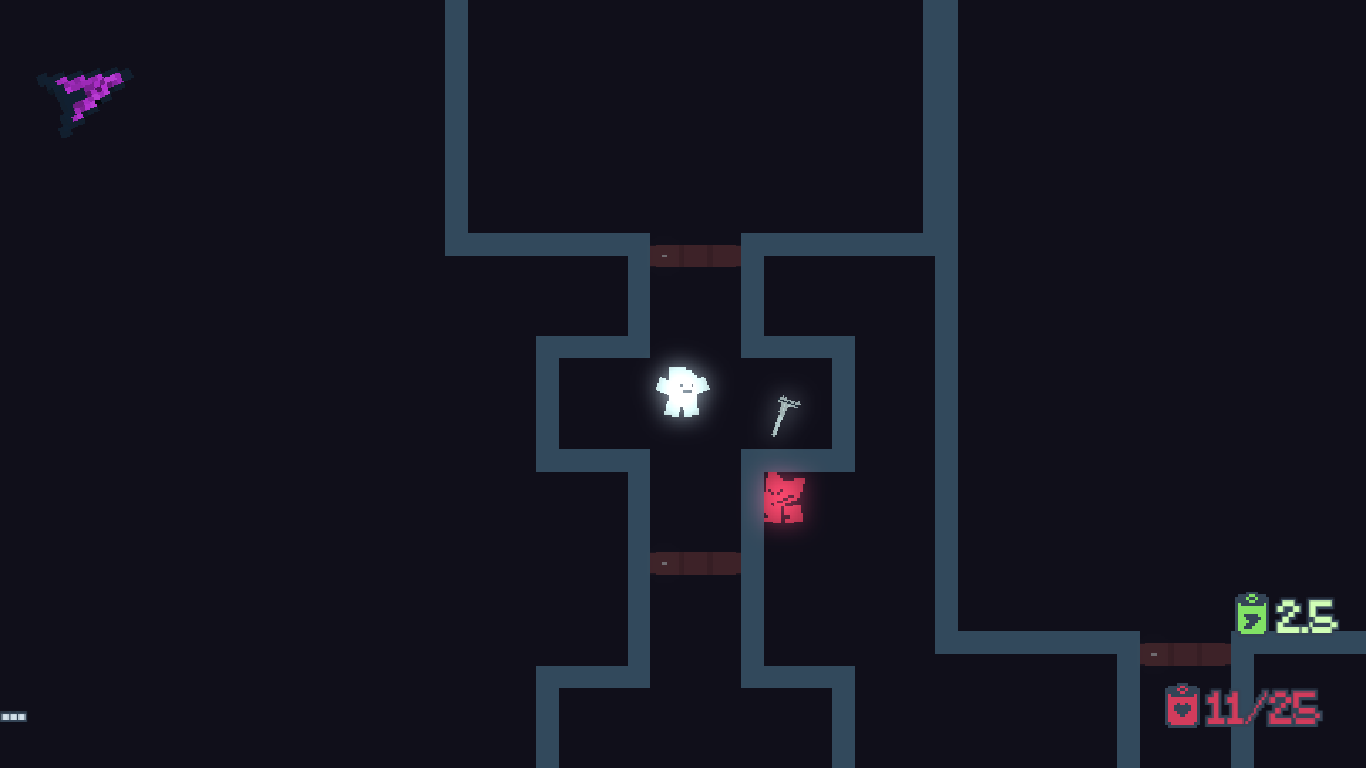 The game has a lot of good things going for it, the dash and movement feels nice and quick, but I feel like the game suffers from being a little too ambitious, with some things that got overlooked. 🤔

Things like how, you can dash in to enemies to hurt them, but they hurt you. And some of the collisions glitching out.

I love the art, it all works together and feels like a complete experience, but the gameplay itself feels a little stiff. 🤔

And the first leg of the game before your first upgrade without enemies, is a little dull. But once enemies come in it gets more interesting. 👍

I did find I did pretty well by just spamming though. 🤔

Just like the photography game I stumbled upon in the first VimJam, I really enjoyed this game because it was a calm break from the bombastic boss fights and rushes lol. And the scene where the boss's hat is next to the berries, it's well done. 👍

The only thing I didn't like was the lack of control while mid air, it made some of the jumps awkward. But that's a minor grip.

Frustrating at times as I wasn't sure what some of the icon bubbles were for immediately. But the clock and sound effect gave you that rush of "must go faster, must go faster".

Thanks for playing!
And yeah, feedback when you got hit/died were some of the top complaints about the game. 🤔

Minimalist art, but it all fits together and feels alive with little bobbing pixels and movement. 👍

Ok, just gonna take the L on this one lol.

My only tiny grip is that pushing in to the wall in order to jump felt a little of unnatural for me.

I like that you went for literal boss fights, I didn't like some of the ways they were implemented, but it's nothing a bit of playtesting and tweaking wouldn't fix. As always, it's hard to really balance/playtest a game as much as it's need to be for a gamejam.

Yeah, the key thing I noticed about the heavy attack, is that I should never have called it that. 😅 Another dev played through my game and we talked about it, and we decided it should have been called a "swing" attack. It's got a wide range so you hit more enemies in an arc, and it has higher knockback.

It's really surprised me to see how the name of the attack made all the difference. Because people would use it and see it did the same damage, but was slower, and then write it off as being a less effective version of the normal attack. All because their expectation was that it was supposed to do more damage. (Lesson learned, I've got to be more careful with how I label things) 😅

I've been getting a lot of comments about how much of a wall the start of the game is before upgrades, and that it needs some balancing lol. Also, yeah, I rushed with the favors randomization, and didn't make any way for the second favor to know what the first one is to avoid doubling up. So that's a bit of a bummer. lol.

I tried using that flash before they attack as a quick and dirty indicator, but that's been one of the things people have commented on. Needing more warning when enemies attack/you get hit. So I'll keep that in my mind. Thanks. 👍

Ooooh, huh...... I didn't plan that, but do you think that helps or hurts the gameplay?

It makes Hel's favor a strong one to get, and means you have a new way to play because normally people are killing the wizards last, but with hel's stunlock you'd want to kill the wizard first. 🤔

The light attack has a really thin hitbox, the heavy swing is much wider. When I go back to tweak the game based on feedback, I'll see what I can do about that. 🤔

That's really strange, are you playing the browser version? If so, which browser are you using?

Those are all valid issues that I've been gathering from watching playthroughs and feedback. I don't usually go back and fix jam games, but this one was so much work that I will likely go back and fix those issues after the jam is over, especially the pacing issues. Story throughout and a difficulty curve instead of a difficulty wall. 👍

Thanks! I'm glad people are enjoying it. 👍

Dash wasn't working for you?