In And Out - Night BurglarView game page

You're a thief ninja(yes), and you want money.
Submitted by HelperWesley (@HelperWesley) — 12 hours, 55 minutes before the deadline
Add to collection 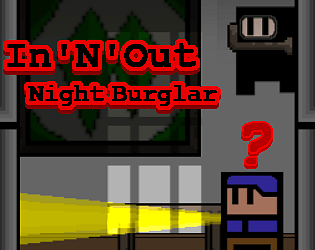 In And Out - Night Burglar's itch.io page

How does your game utilize the limitation and theme?
You steal a museum's art collection.

Could you check my jam entry? I'll really appreciate it, Thanks!

Thank you for the review and the video!

Next game jam I'll probably be doing that instead of just a text review.
Seeing where someone has trouble/issues is so much more useful than just reading about it. :)

Your point about adding more ambient noises, like footsteps that get louder when there's a guard closer and such, is a great point. I'll definitely look in to where else I can squeeze in noises, or tweak pitches for the already existing sounds where applicable.

Really fun stealth game! My favorite part was jumping around the guards to dodge their flashlights. I love how much depth there is in this game, there's a lot of mechanics to keep in mind and you have to utilize nearly all of them. Great job!

Submitted
Ghosts in the Graveyard
LikeReply
HelperWesleyDeveloper307 days ago

Amazing game, very well put together looks like a complete game that you could sell at any app store. Well done!

I've heard a few people say that, but I'd want to add a LOT more content before I'd think about selling this. lol.

Great game, good job! The mechanic is really cool and well thought out.

I spent all of the time I should have spent on the art and music on the level and timing. lol

Wow, really great. I enjoyed it a lot it really was a good game idea. It feels like you planned the game really well.

Feel free to check out my game, it will mean a lot to me

Thank you, I put a lot of time in to it.

Reviewed on my channel :)

Thank you so much for playing and recording that!

Reading a review is nice, but watching one is something much more useful. :)

-The music was placeholder stuff I made on day 1, and try as I might I wasn't happy with anything else I made, so it stayed in. lol
-The cameras and lasers turning off when at max security was because the game got too frustrating with them on, the timer going, and guards in every hallway in later levels.(And I sort of justify it by thinking that they turn them off so the guards aren't constantly tripping them while searching the place.)
-There were more enemies planned, but they never made it in, 7 days sneaks up quick lol. One I even started making code for was a guard that would do a sweep when they came in each room, checking the ceiling and such.

If I had my time back I would have recorded my reviews too, I'm at 60-ish reviews now and recordings might have been more useful than just my text feedback. Glad you're going around doing that for people. :)

No worries. I started doing video recordings because someone did one for my game and it was so much more fun and enjoyable and made the hours of work on the Jam much more meaningful. I really liked the game - good job! :)

If I join another jam I'll probably do that exact thing.

What a great game!
Everything feels very tight and well timed.

Lots of juicy things like hanging from the wall and facing outwards. Or when you slow down after getting caught.

Really strong choices of encouraging better gameplay by allowing the player to make mistakes or go for a "par" run. That is paired well with the security system not ending your run but still proving that it isn't something you want to do.

Thank you for the praise. :)

Since there wasn't any combat I had to add juice where ever I could, so thanks for noticing the places it did make it in. :)

Thank you, I realized around day 2 that I picked a SUPER basic concept, and that there will probably be a dozen games like mine. And so I had to make it as polished as I could and that meant sacrificing a lot of the features I had planned for it in order to just focus on making what little there was fun and fair to play.

I think the art is cool. I also like the idea. But the controls are very weird. There were multiple times were i tried to press W to jump and failed a level. But other than that i have no complaints.

Can you pls try my game?

Nice job. I think, if you improve the graphics, animations, and sounds, this can be a impressive game because i love the logic.

My only regret is not trying to find an artist to team up with. I have many strengths, but art is not one of them. lol.

But I'm stuck on Level 6 lmao

Ignore the basement and go straight for the vault in the top floor ;)

Such a clean strong stealth game, well executed and a lot of fun.

-Favorite part is the ways you can dodge the guards on their patrol, hanging onto the wall and then just tapping off it to run behind a guard as they move past you feels amazing. And the simple holding of w/s for the other methods/jumping over tables etc is perfect. Lets you feel properly stealthy.

-I can't think for what the designs goal feels like, of anything to really critique. There was a minor bug sometimes climbing stairs where you got stuck at the top and had to jump off then jump back up them which lost me one mission. Some extra feedback of how close you are to stealing an item after clicking on it, with an increasing amount of shake as it's closer to joining your collection would be nice, and a different more impactful sound to sell the moment when you take it.

-Also want to mention just how good the first level was at introducing the player to everything the game is, nice work on that.

I made the first level, first of course, so it was what I was using to show people what the game was about when it was still a prototype, so it just got stronger with each person I showed. lol.

As for an indicator for the amount of clicks til you steal something, I'm thinking about maybe a higher pitch jiggle sound as you get closer, or maybe starting on a lower pitch. I'll figure something out, thats a good call, a lot of people got confused with the bigger statues taking so long to steal.

Ahh, great to have been able to iterate on it that much :D . It shows.

Yeah that'd be a nice solution too. It makes 'sense' but more feedback when interacting would really help solidify the idea faster.
With the pitch you could possibly have the same end point but different start point based on the item. For example (don't know your values) to steal a small painting you need to reduce 5 to 0, so the pitch starts offset by multiplier of 5, changing until 0. And the larger statues need to be reduced from 15 to 0, so they're offset by 15 (that'd naturally sound heavier also) slowly coming down to an offset of 0. Then you can immediately hear the difference, while having the same final pitch become familiar and anticipated.

Yup, exactly what I was thinking.

And that would definitely make the statue feel like a heavy statue and the smaller stuff actually feel lighter.
I think I like it, will have to add it to the pile of things to tweak if I go back to edit it. :)

Simple idea, executed perfectly... the burglar reminded me of the Ninji from Super Mario. Good game!

After looking it up, they do look similar.  :P

I think this game took the simple there and back idea and did the best with it. It actually makes sense why you want to go there and back rather than just arbitrarily. Nice execution and fun art style!

Feel free to check my game when you have a chance!

Thanks for the praise!

I can definitely check out your game. :)

Interesting game, with a well defined difficulty curve that slowly opens up the player. I feel like the theme utilization was a very common one however. The art is a little basic and the limited animation of the player and guards is a bit underwhelming. But everything seems to work.

Fair all around, I like to think my strength is in level design and user experience.

I am not an artist in any way, and I'm just too stubborn to use anyone elses assets.

I really liked the game! It wasn't always clear what having a higher alarm level did other than when it was at maximum, where more guards appeared, at least on the first levels. But overall it's great, there's not much else I could say.

If you could also check out mine, I'd appreciate it

And of course I can play your game. :)

what a good game!

Hope you will check out our game too😄

This was really fun, well done!

Submitted
There and Back (Viking edition)
LikeReply
HelperWesleyDeveloper311 days ago

There's been quite a few stealth submissions, but this one has the most depth. There's a lot of different mechanics and interesting ways to go about each level. The UI confused me at first (I thought the check boxes were how you started a level, but then realized it was the name itself).  The mechanics were well polished, but I think the art needs a bit more work. As of right now things feel a bit stiff so I hope you can really take it to the next level with that after the jam is over.

A few people have mentioned the start menu. If I go back and re-work the game, that'll be one of the first things I fix lol.

The art is partly the way it is because of my lack of skill and the time limit. But if I go back to it I'll be sure to work on those too. :)