You found a treasure chest full of gold and gems, but it is located deep underground and surrounded by danger.
Submitted by Ervilsoft
Add to collection 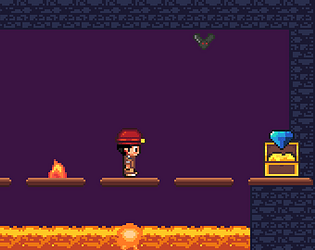 How does your game utilize the limitation and theme?
Pickup gold and gems from the treasure chest and bring them back.

If you did any of the optional challenges, explain how they were used:
Use the theme Underground from a past Jam

It's a fun game, though it is a little repetitive. I would have liked to see more levels, or maybe more hazards as the game progressed. I think one thing you could have done is added a longer bridge and scattered treasure throughout the bridge. Another thing you could do is add in a jump command and create more hazards that would require you to jump to get around them.

The presentation and the graphics look really good though, and I also like how you added a leaderboard. Nice job overall!

Submitted
Ghosts in the Graveyard
LikeReply
Selke StudiosSubmitted356 days ago

Quite addictive, simple to pick up game. Loved the leader-board element, first game I have played in the jam to have this feature! Has got legs for lots more which is great. Thanks!

Doing the same thing over and over felt a bit sameish. Maybe a longer level, where you had to collect treasure in several places before returning would have been more fun. The sound effects worked well, but you could have added some music. Or maybe some sound effect that plays when the highscore table shows.

While the there-and-back theme is there, I think it would be more interesting if something changed when you collect the treasure. Maybe it could randomly create a hole in the bridge that you have to jump over (just make sure the bat can't stay above that hole for too long, since I assume jumping into the bat should cost a life). But it was fun to play for a short while.

And one thing I really liked was that the menu could be controlled with either the keyboard or mouse.

Submitted
Back for the discs
LikeReply
ErvilsoftDeveloper357 days ago

Thanks for your feedback and suggestions, just one thing about the music, there is music during the game play,  the volume is bit lower on the music than in the other sound effects, maybe if your sound volume is a bit low you can't hear it.

Sorry. Now that I turn up the volume, I can hear it. I'm increasing the score I gave in that category then. But the music does feel a bit repetitive, so I think I'll give it a three or a four. And yeah, it's better to have the music too quiet than too loud. If it stops me from hearing the sound effects, that would be more annoying.

Nice Game, It can get a bit repetitive. I also loved how you did the highscores.

Submitted
There and Back
LikeReply