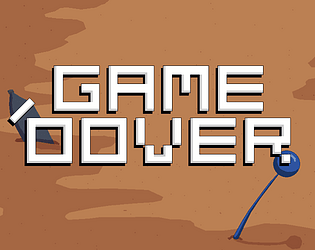 How does your game utilize the limitation and theme?
Hoover collectable junk around the wasteland to save the Earth. You are limited by your power cable and must go out there and back to return the junk for processing.

If you did any of the optional challenges, explain how they were used:
'Swarms' of nanobots are created to repair the atmosphere when enough junk has been collected.

Very satisfying little game! Got over confident and ran out of battery at the end right in front of the plug.. :P Maybe slow down gradually instead of stopping instantly? I don't know. Graphics are nice, music sounds pretty good and gameplay was a lot of fun. Thank you for this!

Thank you for your time and feedback. I really appreciate it. Yes I'll be looking at slowing down 'Oover at loss of power to replace the current stop. Great suggestion made.

This was a neat game! I like the the battery limitation. The graphics were really good as well. One small thing was that it was a little frustrating to run out of battery right before reaching the cord. Maybe have the robot decelerate before dying instead of stopping instantly.

Thanks alot for your time, I appreciate your feedback.

Easier view of overall times left (possibly timer that follows you)
Vacuum could work a bit better (Many times driving past items and vacuuming does nothing even though the animation is right over it)
Better audio balance
Possibly animations for the items "turning into" the nanobots
Secret hoover-able things (maybe like bags floating in the air etc.. since currently all the collectables are ground level)

Thanks for the feedback, I really appreciate it

LikeReply
Opossum In A JarSubmitted1 year ago(+1)

That was very cool! Loved how simple it is but with a risk factor!

Thanks for your time and feedback. I really appreciate it.

It's a very fun game. I like the idea of limiting your sort of area by having a battery metre, gives the player the means to play the game so that they can go out further. The controls are really nice although I think it's a good idea to have not only the arrow keys to move but also using A and D because most games use that so it's just sort of common knowledge that WASD are your movement keys. I would definitely prioritise using WASD for movement rather than arrow keys. Overall though great game 👍

Thank you for your time and feedback, I really appreciate it

The risk/reward factor is really nice, excellent implementation of the theme. Challenging without being unfair, and has a lot of that "one more go" about it. And do I spy the Fusion engine under there?

Thank you for your feedback I really appreciate it. Yes you are correct with fusion, I've been a Fusionite for 2 decades now back when it was The Games Factory.

Same! Keep telling myself I should probably learn another engine at some point but nothing quite works the way Fusion does.

Nice game and animations. I liked how the length changed each time but I felt the battery had to be a little bit longer. I'd be at halfway thinking. i had time to play, but I should've been heading back. Still a great entry!

Thank you I really appreciate your feedback.

I really enjoyed playing this. Simple game loop, but executed with great panache. The robot was really smooth to control, and there were lots of little examples of polish that made the game feel great. Good job!

Thank you, I really appreciate your time and feedback.

Pretty simple but fun game :O The concept reminds me of wall-e wich I love.I can see myself playing this game on mobile.Maybe adding new obstacles can spice things up.Loved it one of the best games i have ever seen in this jam.Excelent job :D

Side note:Maybe lower the volume of effect sounds :)

Thank you for your time and feedback. I really appreciate it. Yes the sound effects is something I am definitely going to fix once the jam ratings have finished. I ran out of time on the sound effects.

I like the idea, look, and feel of the game.

I walked away frustrated though.

So here's my advice:
-Lower the sound of the vacuum and moving around, the collectables make a very satisfying sound, but they're over shadowed by the other sounds.
-Give the players warning about where the point of no return is. There should be a very clear indication at what point I don't have enough energy to get back to my cord. As of now the low energy alarm goes off often at some point where I'm too far out to get back, so I have the frustrating rush back with out any chance of getting to my cord. Or worse yet, getting a fraction of an inch away from my cord and failing. If the alarm went off sooner/later based on how far they were away from the cable, players wouldn't have so many failed runs.
-Giving the player the option of the A/D keys, would feel better. The mouse and arrow keys meant I was pulled over to the right while playing, which just felt weird.

Overall,
The game feels and looks good, but I was left frustrated.

Thank you for your time and feedback, I really appreciate it. Yes the volume of some sound effects has been fedback as too loud and is certainly an easy fix once the jam judging has finished. I ran out of time before I could balance the sounds. I will be adding different difficulty modes which will include a clear point of no return indicator for the battery also. The A/D control is a really quick add on and players will be able to choose either A/D or the arrow keys for movement.

- I think that the collision box to unload could be a bit larger, it was hard to align the first few times
- Maybe the initial length of the cable could be increased? It took me about half a dozen attempts to get enough rubbish to unlock the first upgrade!

Great feedback, thank you for taking the time to play. There is definitely actionable stuff to amend in the game there, once the jam has completed.

Glad to hear! Was fun to play, thanks for making it!

Nice game although a bit difficult. The art was nice and fitting.

Would have loved to see a more accurate display of the power on my robot and/or less junk required to upgrade the cable.

But all in all great submission :)

Thank you for the feedback, I really appreciate it.

Thanks! I really appreciate your feedback.

This game is so cool and special.

Please check out our game if you want🙂

Thank you, I really appreciate your time and feedback. We played your game yesterday, rated and left feedback.

Thank you for your feedback I really appreciate it. Yep I will be fixing the sounds once the jam is finished.

It was fun! I couldn't finish it because I ran out of battery everytime, always too greedy. Loved the details on the background art!

Thanks for your time and feedback. I appreciate it.

Really cool game - love how you made the charging, if I only could use a and d to move it would be great

Submitted
DEER AND BACK - VimJam
LikeReply
Waken GamesDeveloper1 year ago

Thanks for your feedback, I really appreciate it. Your suggestion would be a really quick adjustment which I will schedule to do once the jam has finished.

The game is good. One thing I will say however, the sounds of the wheel and the vacuum could have been much quieter. Also, I feel like its sort of like a clicker game in that its all about scaling up, but you never really evolve or need to develop new skills. The theme is well incorporated.

Submitted
And We're Back?
LikeReply
Waken GamesDeveloper1 year ago(+1)

Thank you for the feedback I really appreciate it.

What a cool game, very simple yet very intense. I really felt like a distant relative to Wall-E with the battery life of my laptop haha. Love how you got collectibles and the theme implemented, great job!

Thank you, I really appreciate your feedback.

That was funny little game. Love the concept behind the energy and charging, yet i think it would be realistic if the battery didn't charge instantly, but took a couple of seconds. Anyway, good job!

Thank you, I really appreciate your feedback.