Rescue your daughter from the interdimensional dangers
Submitted by ricenoodles — 1 hour, 10 minutes before the deadline
Add to collection 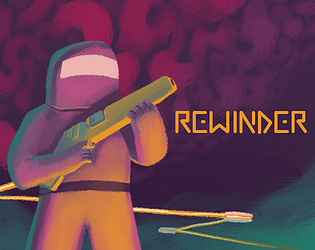 How does your game utilize the limitation and theme?
My game is requires you to gather ore and backtrack to enhance your equipment and further explore your surroundings.

If you did any of the optional challenges, explain how they were used:
I made one final ending which is unlocked by collecting ALL the nodes, one of those nodes is hidden.

Wow I didn't expect I'd be playing the game for so long. Cool narrative, gameplay, and concept, though the gameplay is a bit repetitive. I have some minor suggestions though.

- When you place nodes you shouldn't be able to place a node really close to another node. I had issues because I was trying to remove a node but I ended up adding one instead and I went back, so maybe set a max distance for node placements.

- One round I managed to collect a node ore but my beam was actually in danger, so I broke the rock but the game teleported me back before I could collect it, so I didn't collect the node. I was scared that if I didn't have enough nodes I wouldn't be able to finish so you might want to fix that.

- Oh and while I was playing with controller I let go of my joystick but the player kept moving!? I feel like if the absolute value of the Controller Axis or Controller Vector is less than 0.5 then you shouldn't move. I didn't like that feeling so I ended up playing keyboard.

- I kept playing but I think I got stuck & I don't know why.. It was at the platform with a green plant/tile in the middle of it, towards the top of the map, and I couldn't approach it. (big oof I wanted to finish)

Regardless the game was great! Maybe I have to try it again to finish xD

Submitted
You are the Collectable
LikeReply
iNightfallSubmitted1 year ago

This game is mad awesome! I very much enjoyed playing it! The game has story, it has love, it has laughs, it has some super solid satisfying gameplay and progression! I honestly have nothing negative to say about the game, because it was amazing! (Except for ONE bug I found where I was cheesing the game and was able to despawn a node into the abyss)

Thanks for the amazing game and a very inspiring experience!

Just because i really liked this game and i happened to be watching, here's a clip https://clips.twitch.tv/RudeJoyousDootBudBlast ( i hope you're fine with this Mr Nightfall :D )

The amount of polish for this game is amazing considering the time limit. I will say I understood I needed to place a node but took me longer than it should to realize spacebar dropped a node. It felt the game took a bit too long to make meaningful progress, from upgrading to killing. And at one point, I didn't have enough nodes to progress any further without my tether freaking out so I had to give up there.

Besides that, from the concept to presentation to gameplay to art, the production value of this game is amazing and is an awesome way of implementing the themes. Very well done!

The most amazing game i have played in the jam. You really deserve a reward, i spent a lot of time playing this. You got full stars from me. The only complaint is that in the beginning the monsters are really a pain in the ass.

Feel free to check out my game, it will mean a lot to me

For a long while I didn't know how to use nodes. Maybe the game could have explained that after you become able to craft them. Also, I prefer manually advancing text (like in the games that say "press enter to continue") rather than have it on a timer, unless there's voice acting, and even then I'd like the option to skip it ("I've played this game several times, let me get past this cutscene quickly") or pause it ("something just happened outside the game, let me look at that and return to the game after that, don't force me to watch the cutscene to the end first") and I guess being able to force it to auto-pause after each sentence might be useful for slow readers ("I'm not a native speaker of English, let me look that word up in a dictionary before you show the next sentence").

I could have got further through the game, but having had to restart it just to see the controls, I'll just assume there's stuff I haven't seen and it fits the theme. I think it's fun in Chrome, and unplayably buggy in Firefox. But at least you warn that the audio is missing there, so I tried it in Chrome.

The art looks nice, especially the cutscene art. And the music sounds interesting while fit for an action game. I can sit and listen to it without playing the game, and it doesn't get me bored, at least not for the short while it's taking me to type this. And the main menu animation moving to the beat is a nice touch.

Submitted
Back for the discs
LikeReply
annalog2718Submitted1 year ago

One of my top games yet.  The music, art, sound, concept, story were all so fun I played through it three times once just to get that secret ending and once more just for fun. Amazing job.  The only thing I wish is that I could do something like upgrade my health or something just use up my extra bits and as a reason to play longer.

Very nice game. The art and sound really fits together

Game is good. Art, sounds, and story make it effectual. However, at least the when i play, i am bored to make same things again and again after 15 min. As i said i like the work. Good job.

I loved it, nothing more to say

One of the greatest games here!

The only bummer is at the start that you have to wait for the enemy to show up and there for it takes a lot of time to progress and explore the map (Maybe give a bigger rope at the start?

Sorry, I didn't realize I can place the node and what are whey use for... (maybe add it in the tutorial?)☺

Really nice presentation and overall aesthetic, with a great starting intro. Though the pacing overall is on the nice side the enemies can feel a bit uneven.
-Favorite part is the tangible progress felt by gaining each orb that lets you reach new areas/orbs to continue forward, alongside beam/weapon upgrades. Pulling yourself back to base doubling as a way to recover health likely lost from that journey was also real nice.
-I'd have liked the enemy 'spawn rate' to be more consistent, like based on orbs collected so far, etc. They felt a bit random and separate to your progression.

What an awesome game! It has the whole package,great theme implementation, amazing graphics, perfect soundtrack. I can't fault it. What you made in a week is outstanding!

Amazing game! Never would have thought it was made in just one week because it felt so good to play. Great concept and great execution!

What to say? This game is absolutely fantastic! I mean, the art, the sound design, the mechanic, the progression.. Everything is so well done! I can’t believe you did that much in just a week. This is a definitely a game that could be expanded to a full commercial game. Because of the simple controls, it could even be a mobile game. I played with an xbox one controller and it felt amazing, thank you for supporting gamepads!

I think your game perfectly fits the theme. It’s a very great take on the theme, that doesn’t feel like a chore. Quite the opposite actually, you’re pretty excited to come back to get some upgrades. Having the ability to hold b to go back to base is amazing.

Few things I would improve:

At the beginning I nearly quit, as I was not feeling like I was going to progress. I’m glad I continued as it was very satisfying to reach the end.

This is the best game I’ve played during this jam. Really well done. I hope you’ll consider turning this into a full game!

PS: Small bug at the end, the cinematic started but the game was still running in the background so I was hearing the “teleport back” sound over and over.

Submitted
Type It Out
LikeReply
THE_T_V1RUSSubmitted1 year ago

Really great game! I did encounter a bug where I broke a rock open that dropped a node, but I didn't pick it up before I died. The node vanished and I ended up not having enough for the end.

The game was very relaxing and engaging though, so I played through again! I had a blast and even got the true ending.

I have only positive things to say about the game jam entry. Great work!

Submitted
THERE AND BACK - THE SHOW
LikeReply
DogveloperSubmitted1 year ago

Fantastic game, from the simple character to the stunning cutscene art, loved the beam mechanic... Best game of the Jam I've played yet.

Art and premise of the game was great! Enemies came at a good pace enough to feel like a constant threat, but not too many as to feel overwhelming.

One thing I think would have improved the onboarding a little is to have the player play the game a little before getting them to head back to the lab for upgrades, but overall I had a bunch of fun.

Great game! Perfect intro to the storey, music, sound and atmosphere. Game play art is a nice pixel style and good colour palette. It was a little tough for me to get far but that is due to my lack of skill in gaming. I love the beam limitation and coincidentally is very similar to my game and would love to have your feedback.