Submitted by pikselco — 5 hours, 5 minutes before the deadline
Add to collection 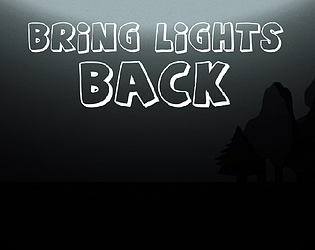 How does your game utilize the limitation and theme?
Justin should collect the lights then he should go back and bring them his mother. I used the theme and the focus for games' main components. Then, i developed content with the extra challanges of jam. There is a secret/hidden ending too.

Very nice art style with some interesting puzzles! Reminds me a lot of Limbo. The story/text here and there is a nice touch as well.

What a beautiful game, loved colors, lights, particles and music! For some reason it reminded me of the 2nd level of Abe's Oddysee!

I love this puzzle platformer game!The atmosphere and the dark vs light art style are great with a pretty interesting story too, well done! One thing you could add is some hangtime when jumping so that the player doesnt feel too frustrated on some levels with say the falling platforms or bots. Great job on this one and enjoy the jam!

Great game, I'm playing on my TV so I can't See properly, Will play on another device later

Good game. Some grammatical weirdness does exist but nothing too terrible. The more dark nature does also make this hard to play on monitors if the room they are in is bright. Some way to give the player a small outline or option to adjust the color would have been greatly appreciated. I also don't know if the hope being lost after dying is intentional or a bug.

Music is pretty good and feels well suited for the game. Some small sound effects would of been appreciated however. Movement and jumping feels right but sometimes I was sure I hit a jump but instead plummeted to my death, implementation of some coyote time would have been nice. The use of lighting was also very nice.

Super pretty game. I love all the lighting effects. I think you did a great job with the story, though I do feel like the payoff at the end was a bit rushed. Would love to see the story a bit more developed. And I totally agree with the kid. Who sends a kid into a cave alone?! Anyway, great game!

Jam time was not enough for designing levels, so the story rushed. Thanks for feedback and video. I really wonder how did your reaction while you are playing. I will watch now.

It'll be nice if you check out our game too😁

I do not like how difficult some of the platforming is...

Your game really wants to be a slow thoughtful experience, but the platforming on the last level was just frustrating, which pulled me out of the experience because I was mad instead of somber.

So my advice:
-Slow down the speed of the enemies and your character.
-Get rid of the momentum, you slide a bit when I tried to stop, and I died a couple times because of it.
-The text should either stay on screen once it's been triggered, or go away permanently when you walk past it. In one level I was backing up to line myself up for a jump, and the text was flashing in and out, which was very distracting. Maybe just giving the text a fade in/out would solve that problem so it doesn't flash so strongly.


Overall,
I liked it, and with some difficulty tweaks you'll have a lot more players walking away with that somber experience your game really wants them to have.

Submitted
In And Out - Night Burglar
LikeReply
pikselcoDeveloper2 years ago(+1)

We have the same level ark skills :D. My friends told me about those text issues. Unluckily, i could not realize that the last level is hard, but after my friends try i understand that. Thanks a lot for your precious feedbacks.

Amazing game, I really enjoyed it, it reminds me of Limbo. I love th aesthetic overall.

The music is so beautiful and sad, and the atmosphere is synched between each element of the game.

I'd love to know your opinion of my game !

Hard to focus on the story because I have to look at all the obstacles and enemies.

Good work there. Just wasn't able to focus on the story.

Can you guys bring me some comments and rates plz?

I enjoyed the game but I felt that it would be better to have the narrative details/exposition shown to the player on stages where there was no danger; while I was playing I was trying to make my way through the level and avoid dying which meant that I wasn't able to focus on some pieces of story. That aside, the music was spectacular and the overall atmosphere was consistent between the sound, art and story. This is a very well-executed game and you should be proud of it.

Thank you for your percious feedback. I absolutely felt that the people won't able to focus some pieces of story, but it was late. Maybe, i could add a storyteller sound, if i had time. Thx :)