Glad you enjoyed it, can you elaborate?

Thanks for playing! I'm glad you liked the concept. Could you elaborate on some of the struggle with the presentation?

That was a bug. The idea was there was going to be two options: "Spin" or "Die". Pressing "Spin" gives the player a chance to stay at their current spot and roll without completing a level; however there is the possibility of the player failing and moving back a few spaces. Spin is basically a gamble. Pressing "Die" was supposed to allow the player to complete a combat level so the player can get a roll without spinning. Except the latter doesn't work. The Spin or Die dialog unintentionally appears after the player successfully completes a level. I'll plan to fix this in a future patch. To bypass the bug if you press Spin enough you can cheese through to the ending (in hindsight I probably should add a limit on how much spins the player has).

Based on your comment, clearly the tutorials in-game are not too descriptive. I'll try to make up for that by including a more detailed tutorial on the game page.

Thank you for playing. :)

How the heck did you get 8.9 seconds!! I didn't even beat my own game yet. Thanks for playing! :)

Dont worry, if you still want to make a rhythm game even though the jam is over go ahead.
The Game Dev Bois server is active all year round even when we don't host jams so feel free to get feedback for your game there.
Also we will be hosting other jams in the future although they may not be rhythm related.

Reply
🎶 Rhythm Jam 🎶 community · Posted in what is Rhythm music?
SkyanSam1 year ago

It doesn't have to be a specific kind of music, and you can use whatever graphics you want.

For music typically rhythm games use EDM but you could go with Orchestra, Rock or something more traditional instead.

Reply
🎶 Rhythm Jam 🎶 community · Posted in Does Anyone Here Actually Know How To Make A Rhythm Game?
SkyanSam1 year ago
Here you go, the video is pretty lengthy but you can just sift through it since there's timestamps. The most important thing for your case would be the SongManager.cs class, Lane.cs class, and maybe Note.cs class. Hopefully you can take those concepts and put them in whatever engine you will be using for this jam :D
Reply
🎶 Rhythm Jam 🎶 community · Replied to SaikiSoft in How much musics
SkyanSam1 year ago (1 edit)

You should be good then :)

Reply
🎶 Rhythm Jam 🎶 community · Posted in Does Anyone Here Actually Know How To Make A Rhythm Game?
SkyanSam1 year ago (1 edit)

Like Spirit Lamp said linear interpolation is the best way to determine a notes position. I'm working on a rhythm game tutorial for Unity to be uploaded before the jam, so by the time its out you may be able to take some concepts and convert the code to GML. I do agree that explaining everything programmatically is difficult so here are some visuals. 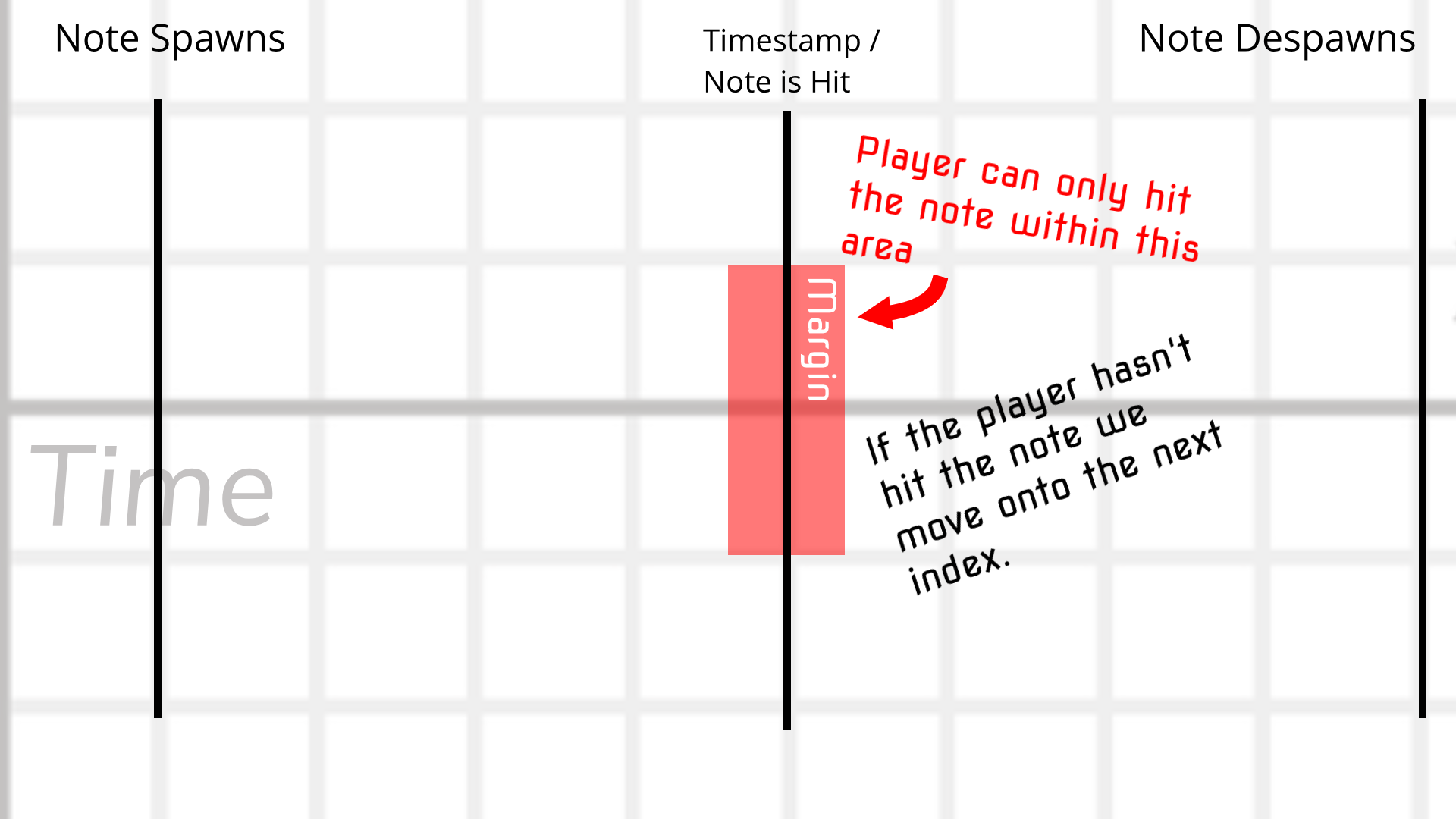 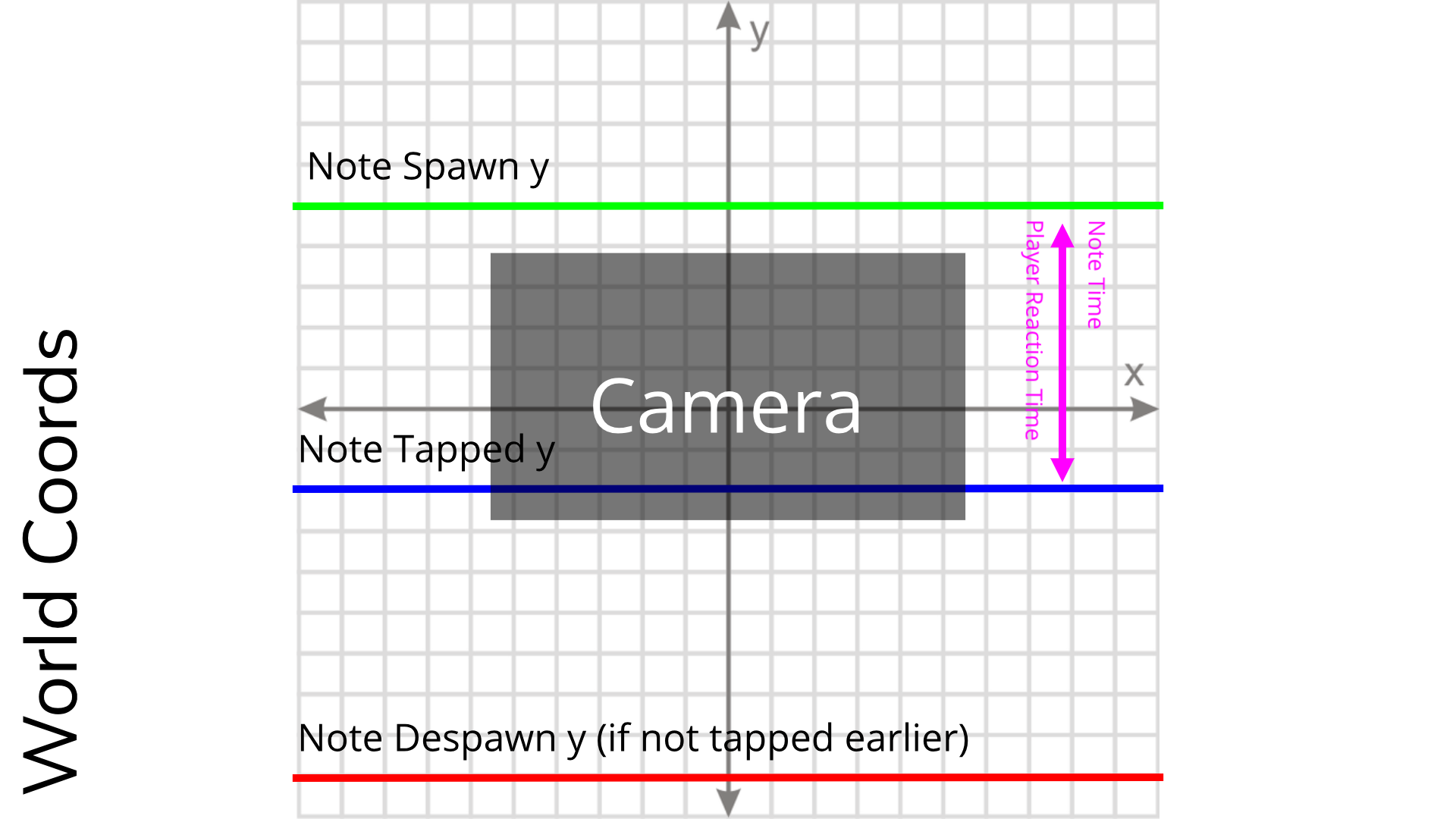 I hope this helps

Reply
🎶 Rhythm Jam 🎶 community · Posted in I Have an Idea For My First Indie Game, But I Don't Know What to Do
SkyanSam1 year ago

Cool, it's an honor for me to host your first jam.

If you need help with development you can always ask around in our discord server, (the link is on the jam page)

Also I will be making a Rhythm Game Tutorial for Unity soon, unsure about Godot.

I hope you have fun during this jam! :)

Yep, the theme is optional. Feel free to style your rhythm game however you want as well use any music or game genre.

Did you enable 2FA and not save your backup codes?

If you would like you can join our discord server, you can brainstorm in the #idea-brainstorm channel.

Also while it is ok to work on some parts of your game before the jam (such as assets, generic code), the majority of your game must be made during the jam.

You should be fine as long as you make the majority of the game within the time period, so you should be able to use those assets :)

Oh I didn't catch that, thanks for pointing that out. I'll make the control method variable static next time so that way it lasts throughout sessions. I can see why pressing M to change to arrow keys each time can be pretty annoying. Sorry about that, I'm glad you enjoyed though! :D

Thank you! Out of curiosity which stream was it?

Yep, making scratch games is completely fine for this jam.

Well, I guess our games really are the reverse then. Also quite addictive, lol. I do enjoy the amount of clutch moments, it feels really satisfying when I'm able to catch a node moving at a pretty fast speed. If you wanted to make it easier on the player you could display an arrow warning, maybe when the nodes will be especially fast. Also I'm not sure if this was intended but audio was static on Firefox, though it was less static when I ran the game on chrome (maybe this audio issue could just be me and I should restart my pc). A leaderboard for this game could also be cool. Overall really fun challenging game with amazing visuals that really put me on the edge while playing. :)

The visuals and audio were really nice. It is an interesting concept but there are some areas that need work to make the game more fun.

For me at least the game didn't become as fun until I got to the later stages of the game (I was able to get to Wave 31). I think that may because the player has too much health. It may be more effective to give the player an HP boost every other wave and lower the total HP.

I also found it really easy to dodge the bullets. To make the game more challenging you could turn the bullets into homing bullets that follow the player that eventually stop after a given amount of time.

The game could definitely could use some work, however the variety of enemies we're really unique and the visuals looked really good. The use of timing (especially with the explosion enemy) was also pretty challenging so that's cool.

I actually tried implementing leaderboards using lootlocker but there was issues so unfortunately I had to remove it. I may add a leaderboard system in the future. Glad you enjoyed it! :D

Here you go, sorry for the delay

Here you go. Also you might want to consider putting a 100% discount on your game for the duration of the rating period, so that people from the jam can play your game. :)

Sorry for not reading your replies sooner. Here you go
https://itch.io/jam/298576/add-game/1008057?token=uJcc6Xxvlcgw4zscjMo4CFbAcmQ

Ask the developers of those unplayable games to upload a new fixed version. You can upload new builds to fix game-breaking bugs since uploading builds are unlocked.

I don't think getting the link will fix your fatal error since your game is already in the jam.

You should be able to upload a new build with a fixed version though, uploading new builds is unlocked.

You should be able to upload a new build to update your game. Uploading builds are unlocked. :)

You're game is already in the jam, you should be good.

Yep, you can upload new builds to your game page as long as it is either fixing game breaking bugs OR supporting more platforms :)

New uploads are now unlocked. You should be able to upload a build for your game now :)