A journey to death and back. A game jam made for the VimJam. Placed 1st in judges pick!
Submitted by Golopogus — 2 hours, 59 minutes before the deadline
Add to collection 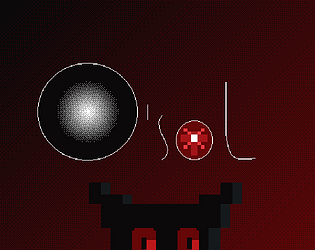 How does your game utilize the limitation and theme?
Death has a grip on James O'Sol's life as he is taken to Limbo and fights his way back again and again (There and Back). He must collect the pieces of his soul to return for good(Collectibles).

You and one other jammer

I unique story, and each level seemed almost like a minigame. Definitely cool, but it was too dark, and the controls felt hard on the second level.

Great game! I loved the concept and the story. My only feedback is that I feel it was a bit TOO dark to see in some parts.

Submitted
THERE AND BACK - THE SHOW
LikeReply
RonDevSubmitted360 days ago

loved the great art and the fantastic atmosphere! Fantastic job!

It'll be nice if you check out our game too (:

WOW! very nice game man.  you really covered all of the bases. Your art/animations were on point.  the music was beautiful. The plot was amazing as well.  Not only that, but your dialogue was good!  A fair amount of games in the jam have good plots, but few have dialogue this good that doesn't feel awkward to read.  Finally, amazing use of the theme.  Really nailed collectables and there and back better than any other game in the jam.  If you don't win that category I will throw a fit.  I am getting so tired of everybody interpreting there and back as go retrieve something and bring it back lol (they even complain when people don't interpret it as such).

My one issue is that you respawn all the way at the beginning when you die.  I eventually just gave up on the second level because I got right near the end and then died lol.  I also think the hit boxes on your bullets and your character could be a little more generous.  lastly, the first level where you just click the enemies wasn't that enjoyable, and was pretty difficult for me using a track pad.  I think it would be cool to just make that a shooting minigame with light explosions to replace the big glows you had.

Overall, very well done.  I even teared up a bit.  I think you should polish it up and release it after the jam!

The atmosphere was impeccable and the use of the theme and limitation in such a perfect harmony coming together to form a super solid story and game concept, nice work!

Suggestions(One for each category that would of taken it to the next star):
More of it (maybe a second run through where each section is longer or different layout)
Ability to look at previous text (several times I clicked through on accident)
Better shoot/hit sfx
Hitting  boss reaction
Collectables not related to advancing story/gameplay

Very clever and inspiring use of the theme! And extremely well executed. A beautiful story even though the old dude doing a wall jump made me laugh a little :)

Hi, I think you have a great idea, it was sad, but it was also unique, love your game!

The font was super hard to read, I guess that's also my fault since I didn't use full-screen, and aside from some tricky controls It was a pretty sad and unique experience. You're a very good story teller.

Submitted
THERE AND BACK - THE SHOW
LikeReply
Waken GamesSubmitted362 days ago

Yo peeps. If you like the music, check out the main theme on my Soundcloud:

I will likely upload future game jam tracks on this Soundcloud so feel free to follow!

Very interesting game. I thought the story elements and theming were really cool, as well as all the different types of gameplay. Something that I found kind of finicky was the wall jump, the fact that it triggered while standing against a wall messed me up occasionally. That might be as simple a fix as only letting the player wall jump if they aren't on the ground. Overall really cool idea and presentation!

yea I’ve heard that issue with the wall jump. Definitely an easy fix, but I guess it was just overlooked. Thanks for trying it out!

Great game man, really enjoyed the atmosphere and the story. Only thing I'd suggest is give some sort of hint about the wall jump ability, confused me for a second when I first had to use it. Other than that top notch!

It was a great story you told there ! I enjoyed every bit of it.

It might have felt a bit unbalanced at some point, with many enemies coming the player's way without many evade options, other than that it's great !

I like the idea. the wall jumping mechanic made it difficult to jump the smaller jumps though. Other than that I liked it. I enjoyed how you kept adding new mechanics to the game to keep it interesting.

And that's my downfall lol, scope creep. I always add too much even when I tell myself I'm doing less this time. Agreed with the wall jump. Honestly, the game could go without that large vertical wall and wall jumping in general, but alas. Thanks for reviewing!

Yeah but wall jumping is fun! :)

This game was really touching, nicely done. I loved how you incorporated the theme and collectibles too. The text and beginning setting gave me undertale vibes! The ending was quite sudden though, I expected him to slowly wake up but he just jumped up haha. Good work!

Oh yes that ending. I agree it's way too rushed. Looks like he's waking up from a nightmare rather than death lol. But thanks so much for the review! I'll check your game out!

Honestly, great job nonethelss. Literally the first game I've played with an emotional tone. I would really wanna know what the proper ending would feel like if you didnt have a 1 week timer for the jam. Good job!

This game had a great atmosphere especially with its music. it obviously wasn't meant to be a "game-play" game but even still the movement controls in the second part could have been improved. However, overall the game was very enjoyable. Great work!

I agree. I didn't focus on the movement controls a lot, but that does have a big effect on player enjoyment. Thanks for the feedback!