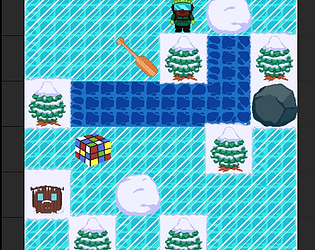 How does your game utilize the limitation and theme?
You need collectables to do the puzzles and you need to go there to get your dog and then back again.

If you did any of the optional challenges, explain how they were used:
Theme party was accidentally used XD didn't know we also did the Puzzle Jam II rules until one day remaining.

Nice little game with a well designed difficulty curve with the puzzles. Maybe a bit more polish visually could have done wonders and some arrow key controls for computer users just for convenience. Great game overall.

I guess if you wanna check my game out I would much appreciate it :)

Submitted
Bring Me Back
LikeReply
NerdHeadSubmitted311 days ago(+1)

I would love it if you could check mine too.

Haha, I liked the game. Simple to understand and play. The challenging puzzles took me a while to solve. Nice game!

Really cute little game. I loved solving the puzzles. The music is great too.

Some nice  characters, same comments as cursed soldier on the web version, maybe the fullscreen mode might help, great twist on the concept for your first jam.

I would also appreciate any feedback on my game too.

Thanks! Also the there and back again theme wasn't used as well as we wanted it to be due to time constraints. Originally you were meant to do the levels once and then do them again backwards with spot. But then we just didn't have time to design that complicated of levels.

On the topic of the screen size originally the screen was 2 times larger but we resized it after we realized we made it to big haha (I was unaware itchio would resize the game if we made the screen smaller so I thought it would just cut it all off) (Joshua confirmed that it's okay for us to do this).

I love sliding puzzles! Man I couldn't solve that one like 4 screens in. Great job!

haha in regards to the 4th puzzle you originally need to knock the snowball up from that point there is 2 solutions.

Also in regards to your youtube video it is really good and thanks for making one out of this game. I recommend that you lower your computer volume and up your voice volume!

I'm happy you enjoyed the game!

Fun little game with a lot of personality!

Lovely puzzle game that reminds me of the web based games we all used to play back in the day. I liked the challenge and sweet twist on the theme. One thing, the web version did render in a weird resolution which stretched higher than the visible screen which made it annoying to scroll but overall the game is a solid play! Good job!

Thank you. Its my first time publishing a game so I probably stuffed up it haha

Nice game!, It's was pretty fun. The design It's pretty good too.