There and Back (Viking edition)View game page 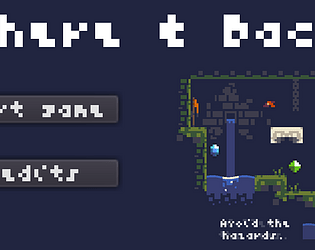 There and Back (Viking edition)'s itch.io page

How does your game utilize the limitation and theme?
Your main goal is to get from the start-flag to a return-flag and back, while collecting gems for points.

The first thing I saw was the main menu, and the font was a bit hard to read. Later I found that number were actually more readable than letters, so at least I can see how long it took me to beat the first level (I couldn't beat the second one). I guess reading isn't something players have to do a lot of (except maybe on the credits screen), but I still feel if I notice it takes effort to read the text, that's sorta like a bug.

Audio? I didn't hear any. There was a turned-on TV in the living room I was playing in, so if the sound was just too dim for me to notice, feel free to tell me that, and I'll try and play it in a more quiet environment next time.

I got through the first level, and tried several times to beat the second level, but I gave up. It was fun though.

And congrats on making your first jam game! It's my first jam too, and I certainly struggled with both fonts and audio (and even more with art and animation, which you seem to have gotten right). And you made a game with two levels in one week, that's pretty good!

Submitted
Back for the discs
LikeReply
devdaveDeveloper1 year ago

I really like how this game looks and the movement is smooth. Jumping off the walls onto the platforms was a bit hard but really nice simple concept. The resolution is a bit low which makes the text hard to read but I like the colours a lot. Well done.

The level maps look amazing. It was a little challenging, but fun to play! Great job

Cool game! Wall jumping was a nice feature. One complaint I have is that it's easy to lose lives in rapid succession. For example I would bounce off of a spike, hit an enemy, and then be knocked back down into the spikes immediately. A bit of a cool down between taking damage might be good. Otherwise nice job :)

I felt like I was pushed into the water without knowing how to swim... please add some tutorial and easier levels for the start.

I love the game's aesthetic, and it felt great to play, especially when the rhythm of the platforming clicked. It does feel too challenging though - a few introductory levels to ramp up the challenge would help with this. All in all good job!

I liked this cute little game, though the platforming was difficult in level 2 haha. As for improvement I can only say add some sound and immunity but those have already been mentioned. Great job on the jam and I hope you add some more levels for me to have a go at! :D

Really visually appealing game. Very easy on the eyes! The platforming feels nice and tight too, with good fluid momentum. Nice wall jumps too, they work and feel just how I would expect.

I would like a bigger view port, I don't know a whole lot about Godot engine but bringing it to 720p would be excellent. Of course you were pressed for time, but some music and small particle effects would go a long way!

I hope you consider making more levels post jam, this is a very good effort.

Thx for the nice feedback!

The game is slick, both in how everything is smoothly put together and in how much momentum the character has :p

I’m curious, how is this programmed?

Thx for the nice feedback ^^. I used the Godot game engine :)

Wish there were some more levels.
And there is a pretty huge difficulty spike from the first level to the second lol.

Submitted
In And Out - Night Burglar
LikeReply
devdaveDeveloper1 year ago(+1)

Yeah, I was pressed on time :). So I figured, might as well make it difficult, if I cant add more than 2 levels ;)

Pretty fun game! if wouldn't mind check mine out that would be cool.

Thx for the live feedback ^^

Really love the art style and how you made the lava. Font was a little hard to read, movement felt like the character was ice skating and took me a good few second to figure out how to jump cause im not used to W or up arrow jumping. Also really wish you added sounds to this game, it'd make it a lot better!

Thx for playing, yeah didn't have enough time for sound :). The lava was actually animated with a simple shader ^^

Pretty fun game! A tutorial couldve been helpful but then I get it's alot to do in a week. Great game!

There is actually a little level you can jump/play around in the title-screen :). I guess I have to be more clear about this next time though ^^

Oh! I checked it out now, my bad! I was wondering why there were coins so high up when the level could be complete with that functionality. Still pretty cool!!!

Pretty fun game. I struggled a little with the wall bounces. Unfortunately this wasn't the first time some birds outsmarted me. I enjoyed the bridge a lot on the second level. Perhaps a couple easier levels to explain how the wall jumping works would have been helpful. Nice work!