I HAVE NOTHING BUT 1'SView game page

A game made by a developer that has no other number but one. He made, but everything is deadly overpowered.
Submitted by tripanazogambiyetsiz — 2 hours, 26 minutes before the deadline
Add to collection 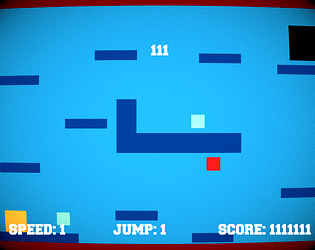 I HAVE NOTHING BUT 1'S's itch.io page

The controls felt unresponsive or inconsistent at the very least. The levels were well designed though. good job!

Its a nice, hard game! Sometimes I felt that my jump was a bit random, (sometimes I would jump high, even though it should be the second jump, or things like that), but probably thats also just me beeing bad. Nice game!

Only one thing, the game seemed to be bugged for me in the beginning when it says i should press space. If I press space, I cant move anymore... If i dont, then i can move normally, just a bit strange. ;D

Yes, there is a little bug about the space thing. I am sorry for that :(

The game is fun and pretty unforgiving. A lot of challenge, however, was actually from "slippery" controls and the lives' system. It may appeal to fans of hardcore games, but an average player can become frustrated with it.

Submitted
Where is my 2nd dimension, gentlemen?
LikeReply
tripanazogambiyetsizDeveloper2 years ago

True, i really regret the life system. I shouldve thinked that this is a game jam and just a few people have the time and patience to play it again and again. And it really would be much more funnier without lives. Thanks for playing and giving feedback.

Nice game, wont manage to get through it though. The platforming is too hard for me =) I like the visual style!

The  artstyle reminded me so much of old Atari Games.

Felt the controls were a little too unforgiving, but overall that the game was really well done. Good job!

The button sensitivity/response is too much. You should maybe tell the player somewhere to avoid hitting the red walls. The game also froze up on me first time I played (I think I hit the wrong button)
Also, this game shouldn't need an installer..

First level tells the player that the red lines kills him. The high sensivity of buttons gets higher as you collect power-ups, part of the game.

I really like the curved monitor effect thats really cool. i wish i did that on mine actually. Really liked the UI and the tutorial thing at the start.

Nice particle effects, and good to have sound and even like a bit of music. made it feel professional.

i liked that it had writing in it, and some kind of story. Made me interested in actually playing it more.

As a colorblind person, kind of wish you had put symbols on the powerups to tell them apart, this wasnt a big problem here though as they have different values, (one is darker than the other) but its somthing to think about

Found the controls a bit frustrating - a bit slidey and its kind of hard to gauge how high you will jump on each up button.

a really easy thing to do  is  zero player velocity and make the controls stop for .5 seconds after you die, so i dont die trying to reach a platform, and then die again cos i am still holding the left button down when i respawn

The lives is kind of annoying - cause i want to just experience the game, and im not like super good at these kind s of games

overall though, the game works, it makes sense, i can play more then one level, i only alt-f4'ed out of it like twice, i understood the concept, it kind of fit the theme - all of these things kind of put this above a lot of games. On top of that some nice UI, shader and polish touches also gave this an edge as well.

Wow! I am so grateful for this awesome feedback. You explained the spacebar bug so good, i could not understand it before. I completely agree with you. I thought about .5 seconds before starting but i dont know why, i just did not implement it. And now i regret it, also the life system. At least for a jam game, i definetly should not add it. Thanks for this comment and playing game. I am so happy to see that a good developer that knows what he plays gave me feedback, and its very precious.

I had a hard time getting used to the movements but it made it all the more challenging. I think it needs a little tweaking but it was very entertaining and engaging.

There is some serious design issue if im struggle to finish 1st level. Also, space bar randomly made game unrensponsive.

Actually 1st level is pretty easy, just gather two red squares, then double jump to the gate, do not use the other platform. That platform is there for you to go on it, and die. After dying once, game waits from you to learn that you should not use that platform. The only design problem is the life system, i think. And if its possible i will reload the game without it but i am not sure about the rules, so i wont.

First off, never use an installer. They're sketchy as hell, and they set off so many anti virus alerts. Instead, just zip up the folder, and distribute that. Next, I hated the lives system. The levels felt trolly, and that's okay. But not when you have only three attempts. The levels are actually really fun, but the lives system is not. Remove that, and this game would be legendary, but as it is, I'm not willing to go past the fourth level. I just didn't have enough lives to scope out new levels, and with each passing level it became more and more frustrating to get back to where you were.

I'm sorry to start off so negative, but on the brighter side, the game looks good, despite the minimalist graphics. There was some great ideas in there, and the game is not far from being really fun. I actually found the trolliness rather interesting, particularly on the first level where it seems that you need to fall then use your midair jump to pass, which was a neat consequence of the extra jump height. Great job for your first platformer, just please delete all code pertaining to the life system :P

After that feedback, i am thinking the same. I will delete the live system :D, it will make the game less competitive but surely more fun. Can i update the game during the jam?

Unfortunately not, updates are locked until after rating ends. But that's only a few days away now.

I like the concept, but I think the execution needs some work. Movement feels a bit wonky to me, and getting sent back to the title screen after a few deaths made this a bit frustrating. Anyway, this is some good content for having been made in 48 hours!

Hi there! Very interesting game based around a pretty original idea... I like it! But somethings really frustrated me: It seams like moving horizontally made you go higher after you'd jump meaning somethimes I would die for no apparent reason. The controls were a bit finicky and the jump not very responsive. I didn't complete the game, but I liked what I saw. The music and sound effects fir very well. Great job with this game!

Submitted
Lightless - Only One Light
LikeReply
tripanazogambiyetsizDeveloper2 years ago(+1)

This is my first platformer ever (weirdly) so I could not manage to perfect the movement, sorry for that. Thanks for playing and rating, and I am happy to see that you liked the idea!

The CRT effect is a nice touch. The platforming seems to work well, but the controls are very twitchy, and it's pretty hard to control your character in tight spaces. I wasn't able to beat it, but I did enjoy as much as I was able to see.

Its good to hear that you enjoyed it!

Really cool game, and clever puzzles! You really need to get used to jumping in this one to be precise.

intriguing.... can you add crt effect/shader.... would be cherry on top

all the best for the rest of the jam
return the favor by Trying mine and leave your feedback: https://itch.io/jam/gmtk-2019/rate/431948

sure, i will play lots of games tomorrow!

It's a fun and challengin game with fine humour and interesting levels.

Submitted
One Spear, One Kill
LikeReply
gadayif02 years ago

I really enjoyed this game, it's beatiful, hard, fun and a good idea for the theme!

It's an interesting concept, and a very hard game (for me). The screen shader is a nice touch, it reminds me to start learning those... :D

Pretty good game, can be improved though.