One Wheel Drive
It's a racing game, but your car only has one wheel.
temp_name
Racing
Play in browser

Really great, wonky game! I love it! Art is on point, gameplay ... yeah, exactly how you would expect it :D Makes you want to try and try again! Great job!

Played and rated! Interesting concept, and I really would love to see it developed a bit more :D

Interesting Idea! But while i get that flow was your intention, to stay in the flow state the game would have to get harder bit by bit. Of course an extremely hard topic. ;D But yeah, I would also appreciate a bit more gameplay variety. However, I dig the artstyle! Overall an interesting concept, would love to see it developed more!

played and rated! nice concept and I really love the art and sound design!

Nice game! Getting used to doing multiple actions at once is a real mind twister (sorry for the pun :P ) This could probably be introduced a bit better, but I liked the game overall, nice work!

Damn, this really is a great game! Could be included as is in a party game. Espcially if you would also have a local multiplayer option! Really great fun, polished experience! Hats off to you!

Thanks for playing! Definetly want to try out your game with a friend, it sounds also great! :D

Yes, we went a bit crazy at the end ;D But yeah, thats what happens when you only work for two day with too little sleep... Great that you enjoyed it, thanks for playing!

Thank you for playing :D

Cool! Thanks for playing!

Thank you for playing and the feedback! Better introducing our players to the controls is definelty a take-away from our players! Thank you!

Rated and Played! A bit confusing at first, but an interesting concept!

Interesting game! The improvements from the game version to the current version are really visible! However, one of my problems were the bit unintuive controls. And as I am currently using a qwertz keyboard (a german layout) i also did not have a dedicated "?" key, and I also did not find a corresponding one :( This is something i surely would have also not thought about, but is an interesting little problem. Other than that, I am excited what will become of this game if you continue to develop it! Great job so far!

Cool concept! Having only one block and guessing where it needs to be, great idea!

But the game is really hard. While the overall movement is quite good, I had trouble with walljumps. The hitbox from the sprites seems to be a bit larger than the hitbox of the box, and I think I mostly died due to walljumps with spikes directly above the box. Otherwise, I also often died on the box with the goal on it. Making the level all the way, only to have the box disappeare a few frames before you land, aahhhhh, it hurts ;D

But overall I enjoyed it, was something different.

Damn, thats a nice game! Reminds me a bit of unfinished swan! But that is only the basic concept. The execution is excellent! Its like painting a beautiful picture, most often with your own failure! Would definetly play this if it were a full game! I also love the follow through on the player! (The wobble when moving!) Even if i dont see the connection fully to the theme of the jam, this is one of my favorites so far! Good work!

Cool game! Cool art, and overall easy to play! I thinks some kind of difficulty progression would be nice, played around 20 minutes and the game felt like it did not get harder to me over time, so it gets a bit boring. Raising the difficulty over time could help this. I also found that I nearly never moved around, and mostly switched between shield and gun. So some kind of reason to use the movement module more would probably a great addition, as it is already implemented ;D But otherwise a nice, chill game!

the controls are definetly interesting! But as already pointed out, some quality of life improvements would be great(most of it was already pointed out in previous comments, what i would also appreciate is a bit of tolerance of mistyped letters) The presentation is extremely well executed. Overall good job!

Very interesting game! The dimenison switching really creates new types of puzzles! While i understand that not seeing anything else than in one dimenison is very intendet, I cought myself switching dimenisons very rapidly to figure out whats going on in the room. Like, going one step to the left - switch dimensions - switch dimension back- go another step to the left. After some time it felt a tiny bit tedious. But this is also my only complaint, otherwise this is a really great game! Excellent Work!

Oh man, I should not play games without reading the description xD When I first played it (i think it was 2 days before, I didnt realise you can teleport/summon your bullet back. xD I just thought i shot it and then i have to retrive it, kind of boring... However, now, with the teleport/ summon function, this is a whole other level! I love it! Fast movements (and controllable teleports) are always cool! Also the art of the game is great. Good Job!

Great game! I should not play games without reading the description xD When I first played it (i think it was 2 days before), I didnt realise you can teleport/summon your bullet back. xD I just thought i shot it and then i have to retrive it, kind of boring... However, now, with the teleport/ summon function, this is a whole other level! I love it! Fast movements (and controllable teleports) are always cool! And the art is great! Simple (and therefore easy to read) but with nice effects! So yeah, great job!

Only thing from this experience, probably inserting an overlay at the beginning of the game for a few seconds with the controls could help ;D

Its a nice, hard game! Sometimes I felt that my jump was a bit random, (sometimes I would jump high, even though it should be the second jump, or things like that), but probably thats also just me beeing bad. Nice game!

Only one thing, the game seemed to be bugged for me in the beginning when it says i should press space. If I press space, I cant move anymore... If i dont, then i can move normally, just a bit strange. ;D

Oh, thats bad :( But thank you for bringing this problem to my attention. I am sadly currently not able to build a downloadable version of the game(due to not being at my main pc), but I will try to create one asap! Thank you for the information!

An interesting concept. I played the 4 times, got a high score of about 50. I felt that I did not correctly understand which of my actions were good, and which were bad, which is a bit of a problem if I am to understand a hidden mechanic. Is it dependend on the sound effects? The biome? How long I wait? The screen shake? As it was explained at the beginning of the game, waiting reduces your risk, but this is also the only mechanic i found out ´:D But with probably more gameplay testing, this could grow to an interesting game! And the graphics and ambience of the game are top! Good Job!

Our game is a racing game, where your car only has one wheel!

Any feedback of the driving mechanic is greatly appreciated, and what parts you had the most difficulty with: 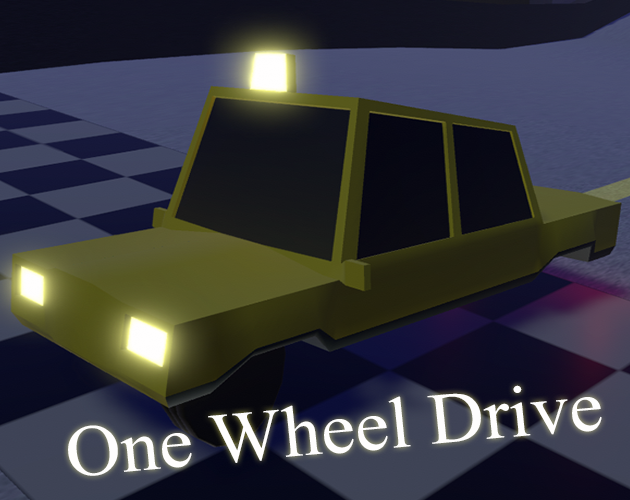 Your game has a mechanic you think has never been done before? Drop me a link and I will play and rate it!

I just love trying out new and different gameplay concepts! So while there are a lot of great one bullet/one life/one button games submitted to the jam, this thread is for the unique and wired games :D

In my opinion our game fits this description quite well, its a racing game, but your car only has one wheel. Try to steer it through a downtown racetrack! Would love it if you play and rate it: https://temp-name.itch.io/one-wheel-drive

Reply
GMTK Game Jam 2019 community · Posted in Looking for some good games without having to sort by popular [Closed!]
temp_name169 days ago (1 edit)

Well, then I guess our one wheel racing game should be on this thread. Actually a quite normal game, except how do you steer a car with only one wheel? Try to find out :D  https://temp-name.itch.io/one-wheel-drive

I love the idea and had fun playing the game! WIth a bit more polish and levels, and probably even a mobile version, I would probably play that a lot :D Gravity games are just so ... satisfying for me xD

Seeing the trail and your crashed ships also added a nice touch to the overall feeling. I could also imagine something like a super meat boy replay, where after you complete the level, you see all your failed attempts and only one makes it.

Thank you for playing! Yes, that would probably also make the start of the game easier. Thank you for the suggestion! :D

As I agree with most that was already said about the game design (I haven't even gotten through the second electricety stage ;D ), i would like to say that I really liked the art of the game! I normally dont like pixel art, but probably the really simplistic (even retro) approach made it really work for me, great job! Another game design aspect though, I was missing a bit of hit feedback. I just didn't know if I was damaging the boss (that or i just didn't hurt the boss, also a possibility xD)

Great to hear that you had fun playing it! Yeah, how to handle driving straight into walls was one of our hardest design choices during the jam, together with what to do when your car rolls over, and there is definetely room for improvement. Thanks for your feedback!

An interesting game! I love that you can cut the bullets as they fly towards you. Maybe it would be cool, if something happens when you hit a bullet (like the classic bouncing back to an enemy, but porbably there are some other things you can also do with that.) I had a bit of a problem with bullets that where shot from enemies far away. Some bullets feel like a bit too fast to dodge, especially if you don't expect a bullet from that direction. Or my reflexes are just too low ;D

However, I love that you can control the game with only one hand. I somehow have a thing for that, and we also made our game controllable with only the mouse. ;D If you want to check it out: https://temp-name.itch.io/one-wheel-drive

Great that you enjoyed the game, and thank you for the feedback!

While one of our goals was to make the players figure out the controls and all the wired quirks of the car, a tutorial would most likely be a great addition for a full game. One other thought I had was to make an indicator arrow, in which direction the car will move, that would vanish after some time. This could probably also help when starting the game...

Anyway, thank you for playing our game! :D