A platformer with only one platform
Submitted by ToasterHead — 4 hours, 13 minutes before the deadline
Add to collection 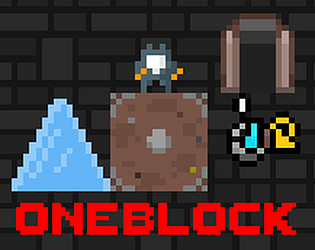 Very cool implementation of the theme!

Cool concept! Having only one block and guessing where it needs to be, great idea!

But the game is really hard. While the overall movement is quite good, I had trouble with walljumps. The hitbox from the sprites seems to be a bit larger than the hitbox of the box, and I think I mostly died due to walljumps with spikes directly above the box. Otherwise, I also often died on the box with the goal on it. Making the level all the way, only to have the box disappeare a few frames before you land, aahhhhh, it hurts ;D

But overall I enjoyed it, was something different.

Thanks a lot for playing the game! You can watch my playthrough to see all the levels -

The video is edited and been shorted to 7 minutes instead of 40 minutes of playing the game :)
LikeReply
NeatGamesSubmitted2 years ago

Oh really clever design!  Having different blocks spawn that you choose is awesome, 5 stars!  Also, the sprite art and UI are done really well.  This is an amazing little game made in just 48 hours~ please check out my entry if you have time. Good day!

Submitted
Only One Arrow
LikeReply
ToasterHeadDeveloper2 years ago

Thanks! Tho my game doesn't have any different blocks that you can choose to spawn, the game is not about that at all XD
But I'll check your game :)

I liked the concept but the controls or the font was confusing a little.. it's potensh but with better visuals with the number.. liked the art! Keep goin!

Interesting stuff, definitely original and according to the theme. I'm giving this a full rating except for design, because I think the mechanic could've been explained better, not in text, but in graphical feedback and a more gradual introduction of the new mechanic. (my own game has a similar problem)

We both have some things to work on after the jam :p

Too tricky for me, but a great combination for puzzle platformer. I like the game but the platforming simply too hard.

I think it's not that the platformer itself is too hard, its the lack of proper introduction and tutorial of the mechanics. I had no troubles with the controls themselves, as you can see I finished my own game here (took me 40 minutes tho)

I am working right now mainly fixing the design including proper introduction and more simpler levels at the start. I will publish the updated version when it's ready. I have a lot of ideas on this game that I want to implement, so stay tuned!

I really like the concept and it has a lot of potential but unfortunately I wasn't able to pass many levels as the mechanic wasn't explained too well in game so I had to read the description. Also I kept dying because I was pressing the up arrow key instead of the space bar because I that that was an alternative... Also the level with the spikes in between the blocks (like one of the first) I found very difficult because he was falling very slowly so I couldn't make it to the portal in time and also i would be like a pixel off and die from the spike... :| Although that may just be my platforming skills :P Anyways other than that I really like the concept, the art, and the sounds. Good job! :D

Also thank you for playing my game and posting on my topic :)

Yeah I know that my game lacks the teleporters introduction, I didn't had the time to make it during the submission time, that's why I made it in the description. All the levels can be completed I tested them by myself. The point of the level with the spikes in between is that you have to use repetition of the teleporters in order to get to the door by time (The slow fall was made intentionally). Anyways, thanks for playing!

Quite some originality here with the disappearing blocks, i also liked the fact that you can take your time to plan things out before going about and having the blocks time out and the quick restart button is quite welcome as well.

I'd say the game is quite well designed overall, the tutorial is pretty clear, although the repeat mechanics are still a bit confusing at first. Solid game anyway, and the pixel art and music are both really good.

Thanks for playing the game :)
How many levels did you pass? Just curious.

I managed to reach the first big blue spiky thing, i wanted to play further but i couldn't figure out how to get past this one, i'm not that good when it comes to puzzle games ^^'

I know I didn't make a proper introduction , I'll make it after the jam ends.

Exactly :o man  i feel so dumb for not even trying to wall jump :p

Such a cool concept and executed well. I really enjoyed it. though I didn't play all the levels

Thanks! Were the mechanics clear enough to understand?

Yeah, I read the description under the game, and the in game tutorials were clear enough. I had a slight bit of confusion with the repeating functionality, but by the time I beat that tutorial I think I had it.

Very cool concept and execution! This is the best entry I have played so far! I really liked the way you mixed platforming with puzzle.

Thank you for making this game!

Wow thanks! Glad to hear you liked it :)

cool idea but a little difficult to play. needs a little polish and it could be a released game. well down!

here is my game :

Thanks for playing the game! What exactly was too difficult? And what is a polish?
I'll check your game later.

I understand the concept, unfortunately I found the controls difficult to use. It took me a long time to understand when exactly the block would move and how. I found it really interesting, but frustrating to use.
I think more of a tutorial will really help this game gain more traction as the idea of a one platfrom platformer is very interesting

I added gifs in the description just right now, tell me if it helps.

Hard to actually figure out what to do, I could not go to next level :/ looks fun!

I was worrying people would not understand the mechanics, even though they are really simple once you get it. You need to use the mouse and click on the teleporters (You can Left click, middle click and Right click on them). Maybe I'll upload a gif on how to do it. You stuck at the very begining?

Ahh my mouse did nothing, maybe that is the problem! A gif would be helpful to add in the description! :)
And yes, I was stuck in the beginning.

Wait, when you click on the teleporter it does nothing? It works for me in the browser.

The description now full of tutorial gifs on how the teleporters work.

Worked a little bit better, however, it is still hard to understand. Great work and thanks for the gifs :)

As you can see I tried :P
When I made the levels and the mechanics It worked for me exactly as I would expected it to be. When I failed at a level it was usually because I was too slow or did not put the teleporters in the right order. That's why I thought maybe people would experiment a bit and catch it. I built the first 3 levels with text just for the introduction, but I guess I didn't explain it clear enough. What do you suggest?

Thanks for replying btw. People seem to play my game, rate it and don't reply, which makes it harder for me to understand if my game works fine and if the mechanics are clear.

I understand now why its complicated to catch it first time. I imagined myself not knowing the mechanics at the first level and try to figure out what to do, now I get what you mean. The 2 day jam was really stressful so I focused more on the mechanics and levels rather than the explanation of it and introduction so I didn't check it properly. Unfortunately, I can't update the game due to the fact that the submission time ended. But I know now how to fix it and explain the mechanics better next time (Basically more visual explanations). Other biggest issue I think is that I forgot to tell that in the game you can restart the level by pressing R on keyboard. Anyways, thank you for playing my game!

No problems! I will try to play it again after the jam! :)