What would happen if a platformer had no hero?
Submitted by andreferreira (@_andreferreira_) — 6 minutes, 20 seconds before the deadline
Add to collection 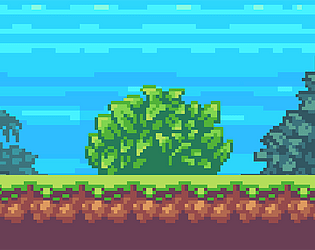 Ranked from 74 ratings. Score is adjusted from raw score by the median number of ratings per game in the jam.

The spritework is still very nice, but the physics are too violent, I barely move my mouse and the box goes full bananas. I tried for few minutes, but I didn't really get far past the start, sorry. I suck at mouse controlled games :D

Submitted
Rogue I Don't Like
LikeReply
Lunatic DancerSubmitted3 years ago(+1)

Thank you for the roast! :D

As others have said, the controls are very sensitive, which results in the box flying all over the place. I think it might contribute to some of the glitches too as it must be hell for the collision detection. Graphics are really nice. One suggestion, a button to refocus the camera on the box might be good.

Thank you for playing. Our idea was that it would be a platform without an active character, we were even going to use a character with his arms crossed like he was refusing to play, so you would move the world around him.

Thank you for the tip! We have it in our future work to recenter the box after 1/2 seconds of not clicking the world. It would help tons when it flies out the screen.

Concept was cool, but the controls were a little finnicky. After getting the four keys we glitched in a wall and became stuck. The idea was very nice though.

Thank you and sorry for that experience =/ the game really is physics heavy and it gets funky some times.

LikeReply
Swords and Flowers3 years ago(+1)

Love the concept and artstyle! Had some real fun figuring out how to bounce the box around. Would like it more if the box was replaced with something more obvious to interact with?

Thank you! Our initial idea was to use a character with his arms crossed like he was refusing to play, do you think that would be more fitting?

I really like the concept but I gave up after playing for a few minutes. I kept getting confused because I kept expecting the box to move in the opposite direction of how it actually moves. Also, somehow my box managed to glitch through a wall/floor (I think? I didn't really see what happened), and it ended up at a different part of the level. I still really like the concept though, just that the game is personally hard for me to play

Thank you for playing. The game really is challenging borderline frustrating to play. The physics are actually sort of too "real". If, for example, you pull a towel from under a small box, it will be flung backwards. But it really isn't very intuitive when you play it for the first time.

Nice, didn't have lag but it's way to sensitive, also I wish for a zoom out cause I always lost the box off the edge of the screen
3/5

Thank you for the suggestion. We have it in the backlog to recenter the camera after 1/2 seconds of not clicking the screen, do you think that would help?

have to test it to say... it may just make everything worse

maybe a button for that?

10/10 loved it so much I played it twice. something very satisfying to hop that little box around. wish there was more and that you had had more time to flush out the hit boxes work out the physics to be perfect.

OMG thank you for enjoying it so much! We were really going for a non-deterministic gameplay where, unlike Mario, you can't be sure if you're going to make that jump, until you've played the game for some time.

That is also the reason why there is no Game Over, the gameplay is challenging enough :D
What would you suggest we add/improve in future work?

Nice concept.  The movement was way to sensitive, though.  Sometimes I solved problems by just by shaking the screen and seeing what happened.  It worked a surprisingly large number of times.

That really can be one way to play it :P The controls definitively need some dampening/smoothing.
Thank you for the feedback.

A great idea, but I could not get that box to do what I wanted it to for the life of me! Sometimes you would move the world a little bit, and the box would move a little bit in one direction, and then you'd move it a little bit more, and it'd go off flying in the other. (I tried both versions of the game and I had the same trouble in both). If the controls were polished up though, this'd be a genuinely fun game!

Thank you for playing. The physics really need some smoothing to prevent little mouse twitches to catapult the box across the map. Good feedback!

The concept is pretty good, but the physics are a chore and the box decided it wanted to go offscreen right before i could get through the door.

Thank you for the feedback, the physics really need some improvement in the future.

Neat idea, but it felt really hard to control.

Thank you for the feedback. Even after some hours into it, I struggle a bit.

Good concept. Fits well with the theme.  Reminded me of And Yet It Moves game.

Implementation could be better, physics was wonky for me when I played. The box jumped around with slightest of the movement. I think you have to reduce the physics timestep or do raycasting based collisions to make it smoother. Overall, I liked it.

Raycast collisions would really lower the load on the physics engine. Thank for playing the game and for the suggestion ;)

If you wish to try the non-laggy version of the game: https://andreferreirav2.github.io/character_needed/

Took me a few seconds to figure out what was going on, and it is a great idea.

But I can't control it. It is WAY too laggy, and I basically got to the point of giving up after a minute because it was IMPOSSIBLE (for me) to understand what is going on in the level with that lag.

I won't rate it because I don't think it's fair of me to do so to a game I technically did not play :P

If you still wish to give it a try, here is the non-laggy version of the game: https://andreferreirav2.github.io/character_needed/
Sorry for the trouble =/

I tried it and it is really hard to control (and I had a bug after two keys(?) at the pit where the level just refused to move).

It is a really cool idea! The controls are REALLY hard to.. well.. control. A big problem that I'm seeing is that once you've done a wrong move and "lost the box", it's really hard to find it. And even if you know where it is, once you move toward that direction the box moves to that direction as well, causing a chase.

I think it's one of the "better on paper" ideas, but I REALLY LOVED having the chance of trying it out, especially because you made it look and sound so lovely (:

Again, thank you for playing and replaying!
As future work, we're going to implement a camera recenter (only camera movement, not the world) after 1/2 seconds of not clicking the screen. Do you think that would help?

That was pretty cool. But man was it hard to get the hang of.

The art was really nice. The sound effects and music paired with it well. Everything gave off the tribal tiki vibe you seemed to be going for. The key pickup sounds were especially helpful because sometimes you just tried to fling the box all around the room and hope for the best.

The level design was well done. Having the starting area be locked off from the rest of the map was great. It meant that no matter how much you flung the crate around, it was still within that starting room until you figured out the controls (by that time you were ready for the rest of the map).

Thank you for the feedback!
The level was closed off on purpose until you get the hang of it.

This is a very interesting idea. It took me a while before I realized there was a box though.

xD That's precisely the point! Good to know it worked :P
Thank you for playing

The controls of the game are not easy. Aside from that, it's a good entry with a good concept. Nice job!

Yes! The controls are way better, more reliable, but it felt kind of weird because of the direction, maybe you can add an option to invert the Y axis. Also, I fall right into a pit in the second screen, and the game stop responding.

holy moly, this is gorgeous! I have to agree with the people who say it's a little fumbly to control though... cool concept, too!

Thank you for playing our game!

The music and the art was good but I think the physics made this game too difficult to play for me. [Edit: spelling mistake]

Submitted
Box in a Box
LikeReply
andreferreiraDeveloper3 years ago

Thanks for this. This version was actually a lot easier to play!

Before it seemed like you had to click on a platform to move the whole level but it could have been lag.

I wouldn't normally plug my game like this but my game and yours used the theme in the same way but went in slightly different directions. You might find it interesting if you want to check it out.

It's so sensitive! Probably needs to have an option to pan the camera without shaking it.

Submitted
Emily and the fireflies
LikeReply
andreferreiraDeveloper3 years ago (1 edit)

It really is xD We've taken note your suggestion for future improvement, thank you