Submitted by Random Thoughts — 11 minutes, 18 seconds before the deadline
Add to collection 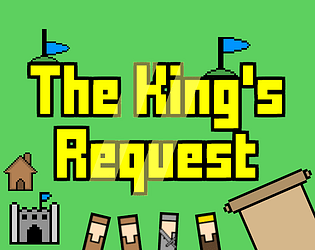 Pretty cool! It'd be nice if the salaries were always displayed on a static HUD so it's easier to adjust and compare wages on the fly, but it worked alright as it was. It was pretty fun to finally get your knights moving on the offensive, only to have the enemies launch an attack and be powerless to call them back.

I felt like I was cheating a bit towards the end, I started using flags as a decoy to lure enemy units away from my base. But then I had a thought! I actually had more control over the enemy units than I did my own! An RTS where I only have direct control over enemy units? Add a cost to planting a flag, and that could be a legitimate mechanic!

I had fun, it was weirdly satisfying watching the enemy hordes tear down my little town.

Hmm... the HUD salary display is actually a good idea.

As for the flag things, I used that strategy once while playtesting but didn't really think much of it. What you said though sounds super interesting! I don't usually update my games after publishing but maybe...

Glad you had fun though. Also glad to hear that seeing my base being swarmed by enemy units is not only something I enjoy :)

Very clever game! Was struggling to get any of my builders to become knights and then got totally nuked by enemies in about 26 seconds. Super fun!

Is there a way to control the camera? I can only zoom/dezoom and I can't get to hives

Yup! If you click and hold the middle mouse button, you can drag the camera around the area.