A platformer without gravity.
Submitted by acoto87 (@acoto87) — 41 minutes, 55 seconds before the deadline
Add to collection 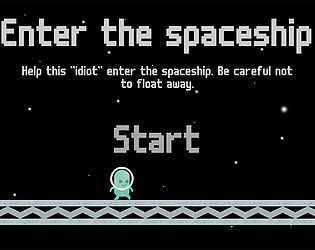 The zero-g mechanic's not half bad, but two horrible mistakes were made: first, every time you flip the controls are inverted. Second, you used Kenney's assets.

Yes, the inversion of the controls is a common critique, I will fix that.

I personally think that the Kenney assets are great for prototype things and early development stages, and since this jam was 90% about game design, I didn't bother too much. Also a I've 0 skills for graphic stuff, did you saw that magnetic effect! XD

Anyway, thanks for playing, I appreciate the feedback. ;)

Ah, no, don't get me wrong, Kenney's assets are great for prototyping and all, and the game jam _is_ less about graphics and more about game design, I would have just preffered original art over free art, even if it is "programmer art". :D

That was really cool! I think  you pulled of the zero-g mechanic really well! It was fun trying to figure out a way to bounce around to get to the platform you needed to get to, especially since you could use your momentum to jump off at angle. However, I didn't like the fact that your controls were reversed if you were on the ceiling, but luckily it didn't cause any unintentional deaths. Also , the laser sound kind of clashed with the music. But other then that, I really enjoyed it! I dug the cutesy aesthetic and music. Nice job!

Thanks, I'm glad you enjoyed it. Going to fx the inverted thing on the ceiling..

Like the game, like the style. But i have a problem with  the execution, the inverted controls on some plataforms kill the momentum! it would be perfect if you worked on that, how the character moves and how he transfer the momentum from one platform to another, its the only thing i didnt like much, but the game is amazing congrats

Thanks for the feedback, I'll look into it, to make more smoth the transitions on the game.

It was really fun to play ! It looks like VVVVVV but it has a more tactical gameplay and I liked the fact that it feel like you often has several options to solve a level. Good job !

Thanks for playing, I'm glad you enjoyed it.

I love this concept.  Makes for interesting puzzles.   Just so you are aware, I actually got stuck floating away in space on the level with the switch.  My guy shot straight up a one point and the level never restarted, leaving me to float into the abyss for eternity with no obvious way to restart the level or continue.  Still solid game though.  Good job.

Submitted
The Birth of Blobby
LikeReply
acoto87Developer1 year ago(+1)

That was probably a bug, maybe  the character miss the collider that reset the level, and got stuck floating in the emptiness and darkness of space for eternity, that sounds scary ;P.

Anyway, thanks for playing!

That is a pretty great idea! I think this could become a really interesting puzzle game. The slow movement might make it a bit sluggish, but I thought it was alright for a slow paced puzzle platformer. Three things I'd improve:

1. The controls staying relative to the player character instead of the camera are a bit confusing. I think it would be better if it would always use the same directions (left arrow moves you to the left side of the screen while on horizontal surfaces and down when on vertical ones, while the right one goes right and up respectively), or perhaps it could have a setting to switch between different control schemes.

2. It seems like it needs some form of feedback regarding the direction you're going to fall to when you engage your magboots. I have to say though, I laughed pretty hard when I was on screen 3 or 4, engaged my magboots and fell sideways through all the previous screens and left the game world with high speed. :D

3. Since we're walking on magnetic surfaces using magnetic boots, perhaps it would be a good idea to have the character simply walk along the corner and move to the attached surface instead of simply stopping (e. g. when you're moving on the floor and you reach a wall you start moving up the wall, or when you reach the end of an elevated segment, you move to walk along its side). If it would make it too easy for the player, you could introduce non-magnetic surfaces, to which you cannot attach with your boots (or the player could enter those surfaces, but their boots would stop working and they'd slide along the side until they reach a magnetic surface or fly away).

All in all, I had fun playing it, it seems like a good idea worth expanding further. :)

Thanks for the detailed feedback. I had fun creating it, not so much because of the point 3, but well, that was came out.

2. Yeah, the game need a lot of indicators, about the magnetics (for which I only put a flashing circle), the floating directions, and more effects.

3. This was the original idea. Sadly I couldn't implemented :(. I tried but failed to make it work, and eventually I have to decide to make something simpler, but finished, then I implemented what you played. The mechanics of walking over magnetic surfaces and shift from one to another smoothly. However, I'm gonna implement this, now with more time and maybe make another similar game with that mechanic and see what I got.

Thanks again for the feedback, I'm glad you enjoyed it.

controls can be a bit confusing but a nice idea non the less. cute visuals and sound design too :)

Thanks, I'm glad you enjoyed it at least a bit. :)

Interesting take on the zero gravity idea! It's kinda hard to control tho

The gameplay has trouble remaining interesting and movement can be slow, but I guess zero gravity is to blame for that! A good start to a game though and I like the concept!

Yeah I notice at the end of the jam that it's maybe a little slow, I'm guessing the fault in the interesting part is due the design of the levels, they could be better to keep the player interested.