My first ever game jam and the third game ever made!
Submitted by StoneColdPanda — 22 hours, 48 minutes before the deadline
Add to collection 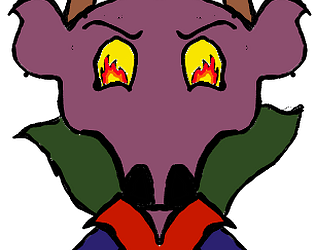 This is a neat story you've put together! the controls were easy to use and the artwork is unique!
It was difficult to tell when the character was getting hurt/ time was being removed because there was no indication on the player character. Some sort of indication that you've been hit (not necessarily hurt) might be something to consider, to communicate to the player that something bad has happened. Also the button didn't react to being pressed so I couldn't tell if I had pressed it or not. Having the button get a little shorter in height once it was touched would make it look like it was pressed inward.
Other than that, really liked playing this! Nice work making a cool game in a short period of time! :D

Submitted
The Race: A Track of Lies!
LikeReply
Smoothy88Submitted1 year ago

art is unique enough but could've been better, but good job anyways

Good idea, could have some improvements in audio and some graphics, for example the ability to turn off/ down sfx. Additionally the timer went into negative numbers and it would be good to give buttons feedback. Nice job though and keep developing! :)

Overall a very nice game, could work a little on polishing the graphics and audio... The gameplay and narrative of the game are surely likable as compared to something made in week...

Do consider playing my game too...

I plan on making a full version of it soon! but the art was entirely made on a Galaxy Note from 2011 xD thank you for playing

Rated - Neat game!  The flying controls feel good and the sprite art is unique.  What do the flowers do, don't seem to hurt?  I got to the giant button but couldn't figure out how to press it. (The button could have used better art, little messy hehe).  Good job completing a jam game!  Hope you learned a lot for your next jam!  Please check out my game when you can.

Submitted
The Quest: Trapped in a Lie
LikeReply
StoneColdPandaDeveloper1 year ago

Thank you for playing my game I appreciate your response... the flowers shoot fruit and those fruits take away 5 seconds from the timer I was gonna add an update text function to my text script but for some reason everything was messing up so I skipped it all together

Visuals are really original :o I really like the black ball with the red eyes. It would be nice to work a little more on music and sound effects in order to better enjoy the game ! Good job :)

thank you for playing my game I really appreciate it. the sounds honestly were rushed xD

I liked the game especially the third level :)

you're the first one to say that.. Thank you for playing!!

Nice game for a weeks work! The graphics and sound effects could definitely be worked on and it was very easy because the flowers and balls didn't do any damage. I liked the story and it had a cool concept so well done! :D

the flowers reduce reduce timer by 5 seconds... It would have been weird to add a health bar to an already dead man haha... The audio was made in like 20 seconds so yeah  I know it sucks and the art work was made with either a mouse or the 2011 Galaxy Note which lags a lot xD. Thank you for playing

I couldn't figure out the last riddle so I didn't finish the game.

The levels are designed in a strange way, I didn't understand what the flowers did to you when they hit you, same goes for the supermarioish black ball. The collider of the door in the first stage is miles away from the actual door.

It's weird that between the stages the camera zoom changes. Also the text box from the third stage is active even when you move so it get filles all the times with wwwwwwwwwwwwwwwwww and ddddddddddddddddddddd and so on..

The art is kinda cute, I didn't undestrand the audio track, was it fire foley? So why is there fire in Purgatory?

There's a lot of things to improve, keep going and good luck!

Submitted
Tales of the Cursed Word
LikeReply
StoneColdPandaDeveloper1 year ago

The firey sound was me crumbling plastic bags lol

Rated! I was confused. money root of evil? money is the root of good!

also, the buttons didn't work... giant thing grabbing me. the key in a lock. door...

but I liked it - definitely a lot of promise here, the goofiness of the lies and buttons, I like that - and getting grabbed and dragged - that was cool - a very inventive mind!

just got stuck. maybe bugged out?

I am not sure why Some players are getting stuck on the button tbh you just collide the character eith it and the cage opens! :) but there are 2 buttons one closes the cage other opens it. To collect the key you just have to walk right to it and done :D. But thank you for playing I really appreciate it I plan on making a longer and more complete and clean version of this game the entire art work was made in one day on a Galaxy Note (the one released in 2011 it lags like holy hell lol and is not precise like a wacom) thank you for playing!!

Audio could've been better. Hit boxes was pretty weird. Some flowers had colliders and some doesn't.  Art can be improved.

I really liked the story but I see the lack of experience in your game.

Never give up on making video games. Learn more coding, art, and sound design. Make more games! You'll get far if you practice, so don't worry!

Thank you for playing! I honestly didn’t notice the collider issue with some flowers xD I may have accidentally used the non prefab version... thank you for your feeback!! I started making games just 2 months ago so I understand the point of lack of experience:3

Thank you for playing! I honestly didn’t notice the collider issue with some flowers xD I may have accidentally used the non prefab version... thank you for your feeback!! I started making games just 2 months ago so I understand the point of lack of experience:3

I think that some sounds would help to put everything together.

I've reached the point where you're asked about a code with an input and didn't know how to continue.

Got stuck right at tje bginning when I couldn't figure out how to press a button... I wont rate it yet as i dont want to rate something where I only played 3 minutes, but I will play it again if you can explain to me how to press the buttons...

You’re just required to touch the button with your character (it was in the monologue near the button :) ) there are 2 buttons touching one opens the cage to the key and the other closes the cage

I did, and tried it with each button individually. Does not work.

same here, i touched each side once, checked again... went back... from top, side... clicked... but very cool use of scale and space!

There are 2 buttons! :3 one closes the cage other opens it

I saw both! maybe I collided with both when doing my test :p

the furthest opens it right?

Your game looks good. Its has a cohesive art style and it is pretty well designed. Also thanks for playing our game!

Thank you for playing my game much appreciated

Thank you for playing my game much appreciated