Short platformer where you can't jump. You can use your hook, but there are consequences.
Submitted by HiddNSpace (@HiddNSpace_GM) — 5 hours, 27 minutes before the deadline
Add to collection 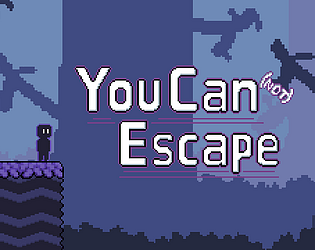 Ranked from 215 ratings. Score is adjusted from raw score by the median number of ratings per game in the jam.

How does your game fit the theme?
My approach was to try to take away things that are used to be in control of the player: the capability to jump, the aim, and also added RNG so it feels a little more "chaotic". The player can only run and shoot their hook but they take the risk and can die trying.

The randomness of the grappling hook is a bit frustrating, but if you find a way to make it interesting, I think this has good potential! Good job!

I think that the current mechanic feels too much erratic but with more polish it can be a very interesting concept. Actually this fits to the theme nicely,  Good job for this jam!

I quite liked this game but I became a bit frustrated as I went through as the aiming crosshair felt really random and a lot of times I was just waiting, pressing SPACE until I got a good shot. The core idea is interesting, but if there was a way to implicitly figure out where the player wants to go and weighting your system slightly in favour of the player that would leave the player feeling less frustrated - perhaps a system like this: when the player presses SPACE, the crosshair will only move around the half of the screen that the player is facing - e.g. left if the character was moving/facing left, right if the character was moving/facing right. That eliminates 50% of the screen and thus massively reduces the scenarios where the crosshair just wanders off the screen and to the wrong place entirely (I had one instance of this issue where I had to attempt targetting 9 times before I could get a jump to progress in one of the middle levels). Not sure if this is the best method of doing it, though, but there might be some good user experience refinements you can make if you keep elaborating on this concept.

Your blue shaded colour scheme is really nice and this game is very polished!

Great looking game with a cool concept that needs a bit more refining, often I found myself just standing around waiting until i could jump, maybe controlling where I could jump more with the mouse would make it feel more skill based.

It's a fun unique movement system game (I'm sure Mark would really like it).
I feel it's a bit too random maybe? But that could just be me being bad at the game.
Great job.

pretty cool game with a interesting Idea, btw I have found a bug in which there are 1 or 2 extra crosshairs that I do not need, still good job with the gane

The control idea is very interesting, so random that though. If the idea of the music and the game title were intentionally selected to represent a nightmare, well you sure did it. I think the game could be improved because the concept is nice and is kind addictive to use the hookshot. Good job there!

Submitted
Out of Boombox
LikeReply
Dan McAlisterSubmitted1 year ago(+1)

I like this idea a lot, but I do have two pieces of feedback. One, I don't think the random chance of dying added much useful information to my decision making. Two, the hook aiming felt too random. The cursor would frequently go off the screen, but if I let the time count out it wouldn't use a charge, thus not increasing my chance of dying. There was rarely a reason to not wait for an ideal shot to line up. I would either force the player to fire the grapple before the time runs out, or give them a bit more control over the direction while keeping it mostly random. Good effort!

Submitted
The Haunting of the Robot Custodian!
LikeReply
Levi MooreSubmitted1 year ago(+1)

I like the concept. It is a little too random when aiming. Sometimes I had to wait for a long time before it moved to where I wanted it. I still enjoyed playing your game, well done :)

Good game, but, the randomness of the grappling hook make some mareas very very frustrating at times.

Nice!! A bit random at times, it makes you feel like you're waiting more than playing

It was pretty fun but sometimes too random, which made it kind of boring.

This game needs more control in its randomness in my humble opinion :)

This is a neat concept and the visuals were very appealing but I found the randomness of the crosshair a little frustrating. Does the player have influence over it?

No, it isn't controllable. I think I will make a second version with some fixes people recommended. But I don't know if it could evolve into a larger game, what do you think? Thanks for your feedback!

I think you could if you just made the hookshot completely controllable by the player. Having just a hookshot instead of a jump is a neat approach to a platformer

Good game with potential. Pretty nice for a game jam and it fits the theme well.

If you want, please check out my submission.

Submitted
Out Of Controls
LikeReply
JustWinginItSubmitted1 year ago(+1)

I felt like this one had a lot of potential but gave up on the third level after 30+ grapples in a row only aimed left and never aimed up. With a bit of tweaking this could be a really great title!

I like the concept a lot actually, but having the aim be completely random hurts this game a lot. In this case, this game does not challenge my platforming skills, it challenges my reflexes and how fast I can react when the cross hair  is where I want it to be.

So I'd take it in one of two ways, either commit to the game of reflexes by making the aim more frantic and it goes in a set path, or commit to the platforming by allowing the player to have some control over the aim.

ANYWAYS. I am a fan of the idea, and I think this is a good entry none the less
GOOD STUFF!!

Great and smooth gameplay. Small bug, see my other comment below on the screenshot of Mika la Grand. Overall very well done and good game

Nice, but yeah ditch the completely random aiming. Another possibility (if you still want the aim to be hard to predict) is to make it move back and forth really quick from whatever direction you point it at. And the random explosions aren't fun. I still had fun with it though since I just ended up sprinting through the whole thing; it almost seemed the hook aimed better when I did that? Might be just dumb luck.

Really liked this. However, the random explosions made it very frustrating. It's challenging enough fighting against the randomness of the hookshot. Exploding near the end of the level when I'm waiting for the right aim was very annoying. I do like the idea though and main mechanic though. Maybe some refinement and polish and this could be a great game to continue with