Submitted by theStoff (@artstoff) — 1 hour, 48 minutes before the deadline
Add to collection 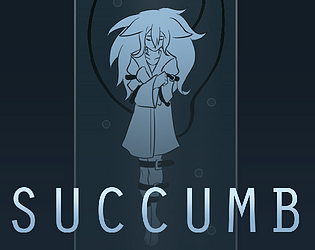 How does your game fit the theme?
As sanity decreases you'll intermittently lose input on controls.

Really like all the art and animation! Agree with others about the movement, tweak that a little and I bet this'll be really great!

Despite the nice atmosphere, art, and story, the controls made me loose my sanity. When I jumped, I couldn't go left or right properly, so I ended up falling off of the platforms I tried to jump to more often than not. While this did produce an 'out of control' feeling, I don't think that that was what you were going for. I just wish I could play this game better.

Yeah the game is pretty rough. Thank you for your feedback though :)

Liked the atmosphere, would love to see more of the story, and what happens to the character.

The injections were almost too common, I played through the whole thing being almost full on the injection vials, I get it was the first level and such but I never once experienced the "Out of control" element on my first run because I was just full up on Sanity the whole time.

Beyond that the jump I think was fine, but the left and right controls were a bit unresponsive, like ice physics all the time which made platforming feel harder than it probably should have.

Yeah very true. It was tough to figure out the right balance but definitely could have had fewer pickups. Glad you liked the atmosphere :)

the idea is pretty unique and i love the appearance o:

The art is beautiful and well polished but like the others one say, the jum is hard to control. I know how hard it is to create a good 2D platformer, so good job nonetheless :)

And the dialogue at the start really get me into it, I was sad to not see a conclusion at the end ! Looking forward to it ;)

Glad you like the art! Perhaps one day I'll show the rest of the story :)

Movement with start acceleration always is really weird and makes for unfun gameplay. It also doesn't help that you often get stuck randomly while walking.

Game looks fantastic tho and if you tweek the movement code and fix some collisions it would probably also play as well as it looks.

Looking forward to playing your other works.

Yeah I was having some raycast issues with Unity's tile system which causes you to get stuck. Gotta figure it out. Maybe a box cast woulda been better. Agree the physics are too much.

Nice :) I love how the hair moves in the animation.

Great art! Really like the presentation. Would add to the comments about the jump. :(

Very neat character design, but the jump is too soapy for me, I couldn't even reach the 2nd platform x) (I'm bad too)

Glad you liked the design :) It's pretty floaty yeah haha

Submitted
Insomniacs: Get Some Sleep
LikeReply
theStoffDeveloper188 days ago

nice game i liked the art

Submitted
Down
LikeReply
theStoffDeveloper188 days ago

Other people have already commented about the controls so I only have one suggestion: Stop the player upon hitting a platform. The player retains horizontal velocity after hitting something midair which means you can hit a platform horizontally after jumping, fall beneath it and immediately start moving left without pressing any input.

The sanity mechanic fits but is more of a hindrance as stated by others.

It's a shame since the other parts(Visuals especially) are just so good.

Glad you like the visuals and good suggestion on the controls! I think if I ever made this bigger the sanity thing would only be for select parts of the game

Similar to most comments about the character sliding too much, but overall the game is very well done! It looks really polished and I enjoy story/dialogue aspect to it!

I've made a platformer with custom-physics before so I understand how difficult they can actually be so I totally get why the controls are rough.

Here's a few things that I noticed that would really help the game (you might already know this too):

1. Your character's jump is so high and so far for the tiny platforms. The platforms should be slightly larger and spaced out more to accommodate this.

2. Your character's acceleration is instant which is really difficult to get a handle on. They move so fast and they get to moving so fast so quick.

3. Your character will sometimes get stuck running in place when you switch directions too fast after landing.

4. The character's speed in air is way too slow, there's barely any control over it. This makes it feel like the character is "slipping" off of platforms because the speed on the ground vastly outdistances the speed in air.

As for the Sanity mechanic, I wasn't really a fan of it. It's an interesting concept and I totally get how you got there, but it's just frustrating in practice. All you're doing is punishing the player unnecessarily. It adheres to theme, but I feel the point of the theme is to find fun mechanics that are interesting by taking away control rather than just taking away control to make the game less fun to play.

I still had a good time and I think it's great that you managed to do so much in such a short time.

Your visuals are incredible and you put in so much effort in so many areas that weren't necessary. I can really see your passion for games.

Congratz on making a game for the jam!

Wow lots of feedback! That's all very true. I agree the movement doesn't feel great. I do enjoy the sanity meter but I can understand that isn't for everyone and could be frustrating. Thank you very much for the input. That's very kind :)

Enjoyed the game and has an interesting take on a sanity mechanic. I would suggest adjusting the  jumping movement to be tighter and have more generous platforms to make the feel a bit better. Difficulty could come more come from loss of control and managing your sanity. -Zane

Thanks! Yeah there are a lot of flaws with the interactions but glad you enjoyed it regardless :)

Awesome art and music- the controls feel a bit odd, like the character is sliding on ice. It makes a bit more difficult than it has to be. Still- nice work!

Yeah very true. I was playing with acceleration but wasn't able to refine it enough. Thanks!

Amazing presentation. I've seen it mentioned that the controls are a little rough, but I still enjoyed it. Good job.

Glad you enjoyed it despite the rough controls :)

I had to play using a Gamepad, mainly because the key press didn't feel responsive enough for platforming.

The vertical corner collisions could also be a tad more forgiving. I had at times felt like I landed square, only to have her slide of the corner and fall. Not sure if that is by design based on her state, but it was a little frustrating. I hope that's helpful!

Either way, some solid platforming sections.

haha yeah I completely agree. There are things I would of liked to add like "coyote time" and the collision detection is a little rough. Thanks for the feedback! Glad you enjoyed what was there despite some of the faults :)

Huge fan of the art style! and I love your interpretation of the theme! great work!