An obstacle run game where you are in control of the obstacle, or are you....?
Submitted by zinGa - Elzinga Games (@ElzingaGames) — 3 hours, 44 minutes before the deadline
Add to collection 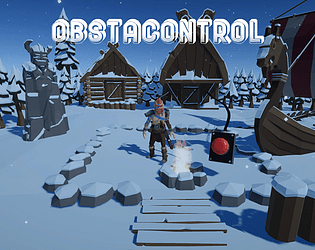 How does your game fit the theme?
Obstacontrol is an obstacle run game where you are in control of the obstacles, or are you....? The player's remote control gets broken in which all obstacles and objects behave differently.. Pass each obstacles and reach the end.

I know you didn't create the art yourself, but the aesthetic was super cool, combining the viking imagery with more modern elements created an intriguing disconnect. As other people have mentioned, the forgiving collision for some elements was a godsend, particularly given the floaty controls. I don't quite know exactly how you managed the transition from falling into the pit to landing back on the platform, but it's easily one of the smoothest, cleanest ways I've ever seen that particular transition done.

Some of this is probably already in the post-jam version, but I played the WebGL build so I didn't see it. I found the controls too floaty-- if you gave the character just a little more weight so that they came to a stop faster when moving laterally, it would make the game much more manageable. I didn't fully understand your main mechanic involving the button; it didn't really feel any different after the button supposedly broke. I feel like if you gave the button a larger function controlling the obstacles (such as reversing the direction of moving pillars) and incorporated that into the level design, your game would feel more unique and fun to play.

The first jam as a solo developer is always hard, and I'm glad to see that you've taken to the challenge with gusto. I'm glad I was able to find this game, I think with a little more polish it could be very fun and interesting. Good luck on your next game, and I'm sure you'll be a valuable asset to whichever team you join!

The best thing about this game that really saves from getting mad at being killed by snow rocks is the fact that they don't kill you if you barely touched them, only if they smash the character. Not sure if this is intentional or not, but if it is, my appreciation for saving my nerves ahah. I mention that because many games kill instantly from a smallest touch (including mine, though), but not yours. The game itself is interesting, although I'm not sure what is the purpose of F besides opening the doors. At first I thought I don't like the fixed camera, but then realized it was a linear level design, so it was fine. Overall, liked it!

It's a very fun idea and I also loved the visuals a lot. Good job!

This game is very cool! the art style is very cool, and the concept is very clever! Rated! Please check out my game too :D

Neat game! The visuals were nice and I liked the gameplay, but as someone else said in the comments here, I wish the remote mechanic was more fleshed out. Maybe you could have it so the player could use the remote to turn certain objects on and off whenever the player wants. Overall I liked it a lot, keep it up!

Thanks for also checking out my game and the feedback !

nice art! I had fun playing this!

Thanks for playing! Also played and rated yours, great game :D

Cool game! Theres definitely some tricks to getting past these levels. The differences between levels are great, to keep the style of play changing.

Thanks for also checking out my game!

Oh this is cool!  Good job working with 3d platforming movement and  various hazards and obstacles! Congrats on submitting such an awesome lowpoly game to the jam~ please check out mine if you haven't :D

Also played and rated your game :D Check my comment on the page

I like the art but the RC mechanic does not seem much different than a standard platforming game with obstacles. would like to have seen the theme and mechanics more integrated with something to do with the cool art!

Thanks! Also played and rated yours ;) Great game!

The game is very beautiful, everything was very well implemented, however some things were not so clear, as for example that the remote was an interactive object, the controls also need to be improved, but it is a good game, I think it would be very polished, it would give to do something incredible!

Thanks for playing and rating my game also :D

Very interesting concept, I don't know of very many 3D-platformers where you can't turn and look at the camera. The game could use some polish but given it is a game jam, that's completely understandable. I could see you doing a lot of other cool things with this concept. Good luck with future game development! Check out my game if you get a chance: https://itch.io/jam/gmtk-2020/rate/694820

Thanks! I was messing around with my levels and the Cinemachine camera. When I found not rotating the character and just one way forward a really nice touch. For exploration puzzle games this type of camera wouldn’t have worked.

Played and rated yours too! Check my comment xD

Love the game! There's surely room for improvement, like the physics of the game are kind of weird, but that didn't ruin the overall experience. Good job!

Love the look of this game, it's challenging, but it can use some work on the floating / drifting. When pressing forward and you are against an obstacle you won't fall of it which feels a bit off.

With some finishing touch improvements this game is supercool, well done!

There is an updated Windows build downloadable on the game’s page. This will be also the new build publishes after the Jam is over and we can put it up on the website :) The movement is a better there.

Found the problem being Input.GetAxis vs Input.GetAxisRaw.. Smoothing was being applied, that’s why it kept sliding/floating for a bit.. it’s fixed in the release after ratings are over ;)

I like the world and character, the animations feel good too. I think the controls are a bit floaty so it gets hard to do precise jumps on small platforms.

I like the idea of the remote but I think it shouldn't say when to use it and instead have the player try out when it works. Maybe you could indicate it with the button turning red or something.

Good stuff though, I liked it!

Submitted
Out of Bytes
LikeReply
zinGa - Elzinga GamesDeveloper1 year ago(+1)

Thanks for playing. Great suggestions.

This is a comment I placed on the main page for this game:

Tbh I thought the control were SUPPOSED to be slippery. Like, that was how you were "out of control". Haha! It reminded me of Celeste for some reason. I agree tho, the controls could use work. Like maybe make the platform larger, or up the friction. Idk it's your game not mines. Or at least make it clear that the slipperiness is part of gimmick. Yeah, I'd also give it a 7/10. I enjoyed it tho, I like games that force me to learn it's mechanics. Like the last level where I had to jump up the vertically moving platforms, I liked that it forced me to learn WHEN to jump: you have to jump to a platform that's falling, not rising. So yeah, good job!

Bit floaty, I like the assets (mostly because I use similar)... Nice job!

the looks are great, but floaty controls and difficulty make it hard to enjoy.  great Job overall.

Good job on the game! As previously mentioned the controls were a but floaty and the hitbox was a but awkward. When you're making a platformer (especially in 3D) precise controls are very very necessary. But you already idnetified what was wrong and im sure the next attempt will be leagues better! Well done!

Yes, thanks for playing. A fair bit of time got wasted on the controls sadly. Had so many level ideas.

Maybe next time in a team it will be easier to focus on specific parts of gameplay instead of everything :) Also learned some new stuff like hooking up the rig for animations. So a great experience overall