What will get you first, the alcoholism or the cops?
Submitted by IanGoGo, jaredmv — 15 hours, 3 minutes before the deadline
Add to collection 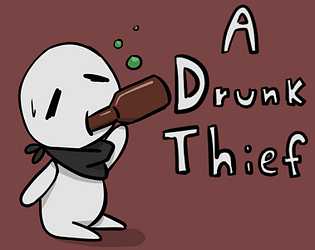 Ranked from 194 ratings. Score is adjusted from raw score by the median number of ratings per game in the jam.

How does your game fit the theme?
As a drunk thief, your movement is often out of control, causing you to stumble and crash into things. Not the best for a stealthy robber.

i love the graphics and the simple audio and music. I feel that the person being drunk could be better coded, like maybe have the controls switch or maybe cause the player to move much slower, faster or even become fatter after a certain amount of time. Suddenly moving of course by a little bit does not really affect the gameplay a whole lot. But overall, nice game! Sorry i couldn't rate in time. :(

Hilarious idea, great execution. The graphics are nice, the gameplay is also at a decent level. Liked this game! *-*
However, there are several points that can be polished. The character could be a little faster, it would make the game a little more dynamic. You should also add a little more transitions between rooms.
Thank you for this submission! Great job!

I really love the art and comedy bits with the newspaper, absolutely hilarious. I do wish that it was a bit harder, though- I usually felt more restrained by the time limit than by the noise level, which I feel like is the more interesting part of the gameplay. Still, great job!

nice art, but it is quite repetitive and not very challenging.

I played for a while and stopped after the level in which I had to collect 5 kitties. I can't think of anything else I'd want after that?

The premise of a drunk thief is pretty hilarious. If you ever do take this to the "next level" this would be amazing as a type of physics based stealth, thieving game. I imagine the player trying to quietly sneak around a house of expensive vases while the character is stumbling all over the place.

Thanks for sharing your game! I enjoyed my time with it.

i would make the player hitbox a little smaller because going through doors felt a little too hard. other than that very cool

A really fun stealth game. The explosion noise is a really nice touch.

Great game, I especially love the look of the game

I like that the layouts were the same. It made the game feel less random because you had some sort of idea where things were if you paid attention in previous rounds. I also like that running out of time isn't a direct failure, but instead simply changes the objective of the game.

Submitted
Out of Ctrl
LikeReply
Ruby StarbloomSubmitted2 years ago

This is a good little game with a cute art style! I like how your drunken-ness makes you more likely to stand on objects and make noises. Nice job!

Submitted
Fire At Will
LikeReply
rayan mazouz2 years ago

Nice idea. The game is simple to understand, and reminds me to a mission from the GTA San Andreas where you had to steal boxes from the house and not make any noise. At the same time, there is a need to remember the location of items so as not to waste time searching. Well done!

Nice and funny idea. The art is simple and looks playful.

Your game is really cute! xD It's quirky and fun. Like what some others have said, I think additional feedback and polish would benefit your game greatly! :)

I really like how the character is designed to look innocent and forgivable, even if he is a thief. He doesn't look like a rotten criminal, he's just some poor guy stumbling into someone's house. My favorite part is how he say's at the beginning how "he'd really wishes he had" whatever item you need to get that round, and it's almost always just really innocuous things you could buy at the store (except the cats, I didn't know he was also a cat burglar :P)

I wish there was a bit better feedback as to what makes you more drunk and how drunk you are. It seemed to me like stealing any item would make you more drunk, and it doesn't make much sense for vases and lamps to do that, but I might've made a wrong assumption due to the lack of feedback. I also kinda wish the controls felt more wacky. Like, "Touch Fuzzy, Get Dizzy" levels of wacky, and maybe beers are only there as bonus points, but since they make more drunk, there's a risk/reward system for stealing beers. Other than that, it was a nice game to play for a bit!

I always like game where you need to mess up everything. In this game it's quite the contrary, but it gives a similar feeling, and feel fun : D Loved the storyline between levels and music change at Mid-Game. The idea of finding objects in a stress situation works well, could be really cool in 3D, with physics and more noise traps : ) Nice entry

It's a really interesting idea! I really liked the play button part. I think that a little bit of balancing to make the noise matter more would be helpful, but other than that, the graphics and sound really made it a good experience!

The moving Play button in the beginning was a nice start.

Having different levels was nice for a feel of progression. However, playing the same map several times in a row with only the objective different made it become repetitive quicker than it needed to. Despite it making the game shorter, I think replaying the same level less would make the game better. Just my opinion, of course.

Otherwise, I appreciated the objective counter, and the police countdown after running out of time was a much better idea than a straight-up fail. Clever!

Really great work, I loved the concept and you executed it well. :D

The graphics are quite good, especially for a game jam, and the soundtrack is solid. :)

A little bit more variety might have been nice, like moving obstacles or something like that, but what you had was enough to keep me engaged. I also do love the polished bonuses of the rage minigame and the police chase, very good additions.