Fight clones of yourself using the same upgrades you equipped.
Submitted by Darn (@Darn_yo), MeowVibes — 1 hour, 33 minutes before the deadline
Add to collection 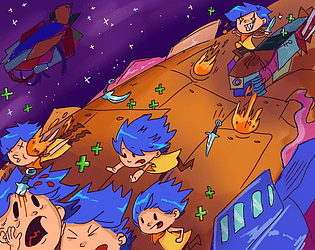 Interesting concept. I would have to choose my abilities very carefully to make sure the great number of clones wont overpower me.

A cool game with an interesting mechanic that I've never seen before. Good Job!

Loved the art and style of this game. Great job!

I really like the concept! The art and especially title art are awesome. It is cool how your introduce more items as you go along but let the player choose the level of complexity they want. Nice job

Submitted
It only takes one
LikeReply
Matteo VeraSubmitted2 years ago(+1)

Protip: Turn off all weapons and hang out with your clone friends.

I added this to my best games of the jam collection. The game is fun to play and the character art is great. The environments are a bit ugly due to sharp edges and tiling textures. However the the assets themselves are great looking. The strategic aspect of picking your powers is a lot of fun. Balancing the risk/reward of speed versus difficulty is a fun puzzle and great design. Also your thumbnail is hilarious.

In the later levels it's a bit easy to lose yourself in the crowd. The idea is really cool though. But I feel that it ties to the theme more thematically than mechanically, if that makes sense.

I can get that, but honestly this game idea wouldn't have come up without the theme to prompt it. The idea evolved from Mark's "only one sprite" suggestion, and then make that interesting mechanically. I still think it adheres to the theme, with effectively one character having the one loadout you selected.

This is a nice idea and well executed. The art nice as well especially the character looks pretty cool.It just could be a bit better balanced, especially when the turtle speed is equipped, with it and the basic attack it became easy.

Really enjoying the concept. One of the more intriguing things is taking abilities at the determent of yourself to negatively affect the clones (slow speed). That could  end up making some really interesting scenarios for player decisions. Did you play around with the idea of limiting how many abilities can be equipped at once?

The level immediately following the gaining of the dash ability is near impossible. The AI seems to have no rhyme or reason to be doing anything, just dashing and jumping everywhere. I think cutting down the number of enemies and going into a very decision trees (patrolling, rushing vs ranged attacking, etc) could really make them feel like a threat rather than a chaotic force of nature.
Also had a bit of a bug when I used dash for the first time. Couldn't use any other abilities until I died and re-spawned.

Attacks have a swipe sound but no hit. Adding hit sounds and bit of screen shake could really add a lot to how the hit feels.

I can tell a lot of love went into the art. If you choose to continue working on the project I think there's a lot of cool stuff here.

Thanks a lot for the comprehensive feedback!

Having debuffs was an "aha" moment during the design, I couldn't come up with more debuffs in the time time though. I didn't consider limiting abilities, that may be an idea.

In regards to AI: the big thing I would have liked to do was make them actually jump towards platforms, rather than do so randomly. More complex AI features would have been nice as well, but had to limit the scope for the jam. Another problem was the levels, I rushed them in the last couple hours, so enemies tend to get stuck in the pits of the levels. If the AI was smarter, or the levels were laid out differently, it could have been a lot better.

More polish to the attacks was certainly needed. Screen shake was literally on the to do list, but I just left it until the very end and there was no more time.

I enjoyed playing this game! It gets challenging!
I like that I can equip different abilities the further I go into the game, that's great, but the text I feel was hard to read at the Unequipped and Equipped part.
And a lot of people are used to using the WASD keys to move the character, so I think, to make the controls more smooth, the attack buttons should be the mouse keys.
Other then that, congratulations for making this game within 48 hours! You did amazing! Good job!

Submitted
Only One Recruit
LikeReply
DarnDeveloper2 years ago(+1)

I actually have WASD implemented, as well as 1/2/3/4 as subsitutes for Z/X/C/V. I never mentioned it as I think the arrow key control scheme is better. I was reluctant to use the mouse, as you wouldn't use it to aim, and I felt that would have been counterintuitive.

And I have played your game! Even left a comment :)

I enjoyed this game a lot! I enjoy the process of figuring out what I can do without and what helps the AI the most. It has some rough edge (the lack of a character attack animation was surprising since the rest of the character was so well animated), but I think you are onto to something. My biggest problem would be that I am not sure how this fits the theme "Only One".

The idea started from Mark's "one sprite" suggestion. Then we figured each character should have the same abilities, so you have only one loadout.

That's makes sense. Sorry, I'll adjust my rating for that.

Love the idea! Love the art! Love the take on the theme! Simply brilliant!

Love the ability equipping feature. Whatever you have, they have. Aaaaahhh! So good!

Submitted
Only One Minute
LikeReply
andidebobSubmitted2 years ago(+1)

A really cool idea and some awesome AI work for a gamejam. The art is truly beautiful. Great job!

This game has promise! It's lacking some polish around the edges but it's a game jam so, to be expected. It's a cool idea though and I really liked a lot of the art, it's really punchy!

Mark played a game on his stream which has a similar concept to yours. But this game actually made better use of the idea. Mark recommended to check this game out: https://store.steampowered.com/app/551770/ECHO/ Well done!

Oh man, I was watching that stream. Was cool to see Mark literally make a suggestion about that game that was basically the concept to ours.

I can only think "I'm not the only one" while playing this game.

As others said, it's lacking polish, but I liked the ideia. Fighting doppelgangers is always a challenge that requires extra strategy.

The idea is pretty good but it needs more feedback for when you get hit and at some point the fireballs I shot didn't move and just stood still in the air when I shot them. Then the ability stopped working entirely.

I like the art, but in my oppinion needs more animations, but speccially more feedback when you hit an enemy, when you jump, when you land.

Submitted
Cat Food For One
LikeReply
greyRocketSubmitted2 years ago(+1)

The game is ok, the art looks nice. I think the fighting ability isn't satisfying enough.