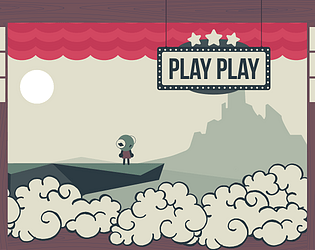 Ranked from 58 ratings. Score is adjusted from raw score by the median number of ratings per game in the jam.

Cute little game! I included it in my GMTK Game Jam 2019 compilation video series, if you’d like to take a look. :)

Wow, this game is so lovely. I really loved the palette and style of the whole thing, such a clever take on the theme.

The controls and player character animations are a bit glitchy, but the theme interpretation definitely makes up for it.

Cool concept, and looks great, well done. Platforming mechanics could use some work, but no biggy.

Maybe this concept could've been even more interesting if the core idea of a single changing level was utilized for gameplay. For example, being able to go back to different scenes to change something that will affect future scenes. (e.g. a ball placed in one scene will be the sun in a future scene and so will affect the time of day)

Submitted
Only One Color Maze
LikeReply
eyeholesinSubmitted202 days ago

really nice art. controls felt pretty tight.  I really like the concept of jumping around a set that is moving.

I cant say a lot because i think the game kind of breaks for me at the second ship. i get on it, and then do a jump next to the cabin, and then i stop being able to jump. My only other option seems to be to fall into the sea, at which point the level resets but i dont respawn :S

because of this bug i havnt played much more then that, but again, i really like the concept. I think it would be cool to play with the idea of using the scene transitions themselves as a mechanic, like standing on a platform which moves you to the next scene, or jumping between two moving platforms during a scene transition to pick up an optional collectable.

maybe you do do this, but i cant get past this second ship so :S

Platforming itself needs some polish and work, but the core idea is interesting. Maybe a time limit would put more pressure on the player. This could be expanded upon, and turn into a fun game. Loved the art style and color pallete.
Check our game! https://cerosware.itch.io/one-stick-shooter

Cute idea nad looks. Just so you know the game bugged for me on the second ship - couldn't jump, so just walked into the water, and after the curtain dropped the all the scenery was still there, first smaller boat just keep spawning over and over and the character was nowhere to be found. Cheers!

Very great concept. i like your idea about one act.

Awesome game. Looks like I'm in a theater. Love this character and the art design, such a beautiful draws.

Great concept and execution. The animation is really well done and the character movement is really good. Hope you add sounds to the game when the Jam is over because this game with some SFX and soundtrack will be incredible. Congratulations!

So cute, so well done!

Submitted
By The Blade
LikeReply
iffalsepanicSubmitted206 days ago

I really like how you applied the theme to the aesthetic of the game. I particularly enjoyed seeing the curtain drop when you "die". Very nice touch.

Simply brilliant! The game perfectly sticks to the theme. I am blown away by your creativeness!

this is cool, very good idea; felt like a story, although too short :)

The idea is really genius! And the art is very lovely. Control felt a bit off though. And some music/sfx might have made the whole experience better. I would like to see where this concept would get! Well done :)

Submitted
Only One Maze
LikeReply
arthurion98Submitted207 days ago

Loving the art direction and how the platformer nicely fit into the one-stage idea! Really good if not for the control that feel off at time...

i just love it, a little bit buggy. mainly on walljumps but the presentation in general is amazing

Very clever idea. Love the art, and the creativity of the one scene really nailed the theme. Well done =)