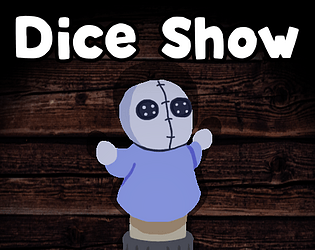 Ranked from 63 ratings. Score is adjusted from raw score by the median number of ratings per game in the jam.

How many people worked on this game total?
3

Did you use any existing assets? If so, list them below.
DOTween and some scripts I used in past jams. Some CC0 sounds from Freesound.org

Link to your source?
https://github.com/iLays1/Die_Dice

you guys! what a cool game - on every layer.
a simple but very effective mechanism to constantly make meaningful descision
and an absurd but so funny game world / art style!

Angry snake kept killing me, but I think it's my mothers fault, cause dad chose poorly ;-)

Very nice take with the dice! I really liked that! The artwork was very cool and unique too! I'm just imagening myself smacking two sockpuppets together while rolling some dice:D

If you still got the energy, can you rate my game, too? Thanks a lot! :P

Well this is extremely well made, congrats!

great game i played that for a while love the art

Nicely done. This is a pretty fun jam game!

This hints at scratching that same itch as other turn-based roguelites but with dice. Reminds me of Slice & Dice by tann which you should check out for more inspiration if you haven't seen it already. There's also an android version that I've put a ton of hours into. Suffice to say, I love these games

Everything played smoothly and I understood it after a little trial and error. I got a white die with 5 skulls and an arrow - what does that do? Besides kill me lol

If anything, I would maybe add a way to speed up animations or skip actions with a click for your planned full version. Right now it just feels a little slow. But otherwise, really cool. Well done. Kudos. Other praise. :)

Like others have commented, this was very polished for a 10-day jam and the mechanics were spot on. I was quite confused at the beginning but that's my only issue with this. A tutorial with good pacing would help a ton of players get into it. But once the mechanics 'clicked' for me, it was a fun time. Overall good game, good mechanics and I enjoy the aesthetic :)

Well polished and fun once I got the hang of it. I had a hard time at first understanding the controls and what does what. I thought I took tons of damage even though I had shields, for example, because the red number was still the same, but then noticed that my hp doesn't go down by that much if I do have shields up. And it took me a bit to understand how all the other things work, too. It all works really well together though once you figure it out.

Really cool game. The art looks great and the concept is well executed. I can't think of any suggestions that more time on the project wouldnt solve. Great job!

This is so nice. I've never played a dice deck builder, and it's a really clever idea. The artwork and everything is really nice.

One thing that kinda confused me was if the armor was helping me, and I had to run the numbers. It might be better to display the net damage dealt when hit, subtracting out the armor saves.

Really great game, though. Saw it in the stream with Tim and Rick and been on my mind to play. Great work!

I'm really impressed with the general level of polish in this submission. Excellent job with everything! I really enjoyed it, though I found it a bit too easy to die from too many skulls. Often times I would roll and only have 1 or 2 damage/armor and feel the need to keep rolling just to get enough armor to not die, only to lose my turn from accumulating too many skulls. A way to get skulls back from dice rolls would be supreme!

Well done for coming up such an original idea. I had fun although I didn't get far. Maybe I was just unlucky :D

So, is there any foe after Hrafnir?

The sounds and reactions to clicking on the Roll/Attack buttons was often too disjointed, though. I could click them when the game wasn't ready and the sounds played already, and when I clicked again the sounds didn't necessarily play as well...

We have Attack, Shield, Skull, and Dud. Maybe if there was some healing possible as well?

once you beat the eye demon that's it! I honestly didn't have time for a win screen haha. So I understand it could be confusing. I should probably have taken the time to throw a quick win screen together haha.

And 100% sounds were kinda slapped together at the end in a mad rush. So their implimentation is lacking for sure!

And thanks for playing

Unfortunatly I jujst made it once to see him, not beat him... Seems like I had also quite a bit of luck with my dice rolls in that run...

Congratulations on the submission. Great little game I enjoyed playing it. I like rolling dice.

Submitted
There is No Heaven
LikeReply
Lia GodoySubmitted184 days ago(+1)

Gosh, love the game! Those puppets are too damn cute :3

Love dice games, this is definitely in my list! Didn't quite get the connection with the theme, but had a really great time

You u want, please check out ours!

The idea behind it is that if you die during a run, the character goes and has a child instead of dying. Which would define the dice of the next character. Hence death being a new beginning.

But I can completely understand how that's unclear.

Thanks so much tho!

wow that's awesome! that's why we marry on level 1, dope! Gonna play again e get past my beat up

Awesome original game! For starters, I love the art direction with the puppets and dices. And the main mechanic could even be a board game (I would certainly buy it :-). Great entry, thanks for this very creative idea!

Submitted
The Revenge of the Gods
LikeReply
ilPrinniDeveloper183 days ago(+1)

I highly reccomend checking out zombie dice, it was a huge inspiration for this project and i took alot of ques from its design.

give it a look!

Thanks so much for playing

Thanks for this discover, I'll definitivly play it!

Played and rated. Had a good time, great submission!

Overall I enjoyed my time playing and nothing bothered me. The art style is simple and unique, the audio fits the art and the gameplay is fun! Congrats for making this in 10 days :)

My only downside would be that I didn't really see the link with the theme.

Would appreciate if you check out and rate our game as well: https://hadilepanda.itch.io/rise-of-necromancy

I can see what you mean about the use of the theme not popping out.

The idea behind it is that if you die during a run, the character goes and has a child instead of dying. Which would define the dice of the next character. Hence death being a new beginning.

Thanks so much tho!

Oh now I see! Makes a lot more sense. I guess I thought we only had the deck we have at the beginning. Didn't realize we get different decks after each  death.

Will be trying again and update my vote based on that.

Honestly love the look. Love the idea of the puppets. I wouldve liked the two buttons to be on like completely diff places cause on several occasions i clicked the wrong button. It was really well balanced. Whenever i got like 3 skulls in a row or smth, it didnt feel like it came outta nowhere or smth. Cool game

This is so close to being an excellent game, the only thing I think it needs is a better UI layout.
The roll and attack should either be on the left or lift the dice and put the roll and attack in the centre.
Rather than the word attack I think you should use something else, because your attack is also a defend, perhaps "Fight".
Love the art and the character movement, great game design, just needs the UI changes imo.
Could be a huge mobile game.

There is something Slay the Spire about it.

Ooo I really like the Ui ideas.
I renamed the Attack button like 3 times this jam but Fight sounds perfect!

Thanks so much for the feedback