Manage your everyday life - while being dead
Submitted by kindman (@ratherkind) — 1 day, 22 hours before the deadline
Add to collection 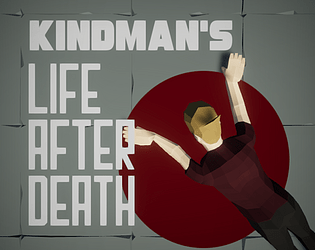 Ranked from 76 ratings. Score is adjusted from raw score by the median number of ratings per game in the jam.

How many people worked on this game total?
1

Did you use any existing assets? If so, list them below.
Synty Studios Free Starter Pack, Song "Space Jazz" by Kevin MacLeod

Link to your source?
https://github.com/Kindmaniac/KLAD/

This was really fun, and the theme made me laugh. Great job on the sound, music, and overall concept!

That you just died doesn't mean you can take off work :grin:

So it's frogger to cross the road (sort of), then you've got to clean up (the patrons of that place really are generous with the amount of coins they throw around and don't pick up). Yoga makes you somewhat light headed, though. And at the end it's all about hitting the bed.

This is the most realistic simulator I ever played!

All jokes aside, very fun game. Just fooling around with no timers, scores, or any other pressure at all was definitely the right choice. Sometimes one mechanic is enough to make a great experience :)

This one was really funny and fun! I love the charming sounds between transitions and objectives!

I like that dragging was not limited to X or Y direction but also includes Z! Was worried I couldn't clean the floor because of the one coin on a certain table!

Overall I really loved this one! It was super charming and enjoyable!:D

this was really fun, wished for more level

Loved this one!  I would love to see it as a longer game. So much fun.

Submitted
This Way Up
LikeReply
MrBreadManSubmitted23 days ago(+1)

This game was fun from the second I pressed play. The light and happy music coupled with the suddenly coming into frame was hilarious. The humor and tone of the game was great. I think there is a lot of potential with this idea, kinda like weekend at Bernie's meets an angry birds adventure game. The mechanic of dragging the body around was a lot of fun. Overall this game a treat to play, great work!

It's so silly, but it's the kind of silly I love. I was smiling while playing from the beginning to the end!

Great and fun concept xD I had fun dragging the character all around, good job!

Mad :). But fun :P
Ragdoll physics as a game mechanic :D.
Did struggle to leave the room after clean the floor.
But great concept, well done :)

It was difficult to go into the door in the second scene becouse of the "ray" projection(I guess, it thought that I want to move character up, when I want to me him forward)

The second was on the Home scene: character flew over the house (outside the screen) and I was not able to do anything:(

But overall the game was really fun!

By far the best submission yet. I loved your sense of humour. Oh yeah.

hilarious and creative. Definitely unexpected. Had me laughing out loud and genuinely curious to see what was coming next.

"Oh yeah!" Hehehe, this is a very fun game, very well made, with a great idea for mechanics, and very well done sound (I see you know your sound processing well :D). Possibly the best sounding game I have experienced this jam.

If any, I would recommend you to add a full screen option for the web player (I couldn't find it in this one).

10/10, knocked it out of the park. The basic mechanic is funny, fun, and adapts well to the different levels. Only feedback is that sometimes it's hard to click on the body to start dragging the triangle.

Just wow, this is definetively a think out of the box game, really nice job and really creative entry. It be nice if you checked out my game

Great take on the theme. I especially loved the first and last level being riffs on frogger and angry birds.