Delve into a game that lets you choose the mechanics.
Submitted by Anemoi
Add to collection 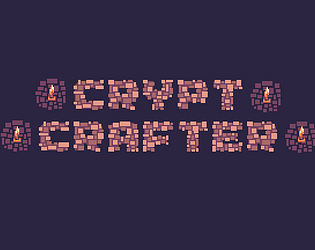 The idea and execution in this game is excellent!

The flow and pace is really good and I love how at the boss fight you use everything you have learned. Congratulations!

Such an amazing concept!! I loved the idea of it starting from just words on a screen to a game with plenty of mechanics. I think the dash could have been a little shorter, as I found myself unintentionally dashing right into a pit a lot. The boss fight was really fun! I couldn't manage to beat it, but I think it was a really cool idea for a boss.  The attack and dash buttons where a bit hard to use when moving with WASD, but it the arrows worked fine!

Whoa, really cool concept. I loved the whole idea of evolving your game, especially the initial part where you have to choose between graphics and movement. The graphics are also really cool and I liked the boss fight. (:

I thought overall the game was pretty cool! it fit the theme, and the art was great. The boss was tough.

So I just played and finished your game completely. I liked game design and idea! Though it didn't felt like I was creating my dungeon, more like learning game mechanics. It could've been more "game dev" themed. if you know what I mean. And the last boss fight was pretty rough x)

Background music reminds me of FEZ, composer did a good job on creating a proper atpmosphere here!

There could be much more to it, but as a game jam entry it's 10/10 game that should be deserving all attention :)

Cute, but doesn't keep my attention. Music is a little jank. I feel like it progresses without exploring itself some more.

Thank you for the feedback. Please keep in mind this was made in seven days as an entry to a jam! It's unfortunate that we didn't have time to further explore the concept, maybe that's something we'll revisit in the future.

This is amazing, I really like the text adventure first bit, and everything after as well, I encountered a bug where once I got attacking the option for dashing showed up while I was playing the stage, so I clicked on it and it took me there. Also, I thought the final boss was easy and then boom, second stage! Also this was very impressive sprite work, and the overall presentation was fantastic, although the music wasn't that great. And now that I have finished it, having to get to the version 1.0 to complete the game was a nice touch.

Great game! Music is quite annoying, controls are a bit clunky (or if I try to be more precise, they are a bit contradicting almost all the other game control schemes and principles, and that is why they are difficult to get used to), but the pixelart is nice, and overall - great game! And the bossfight - that was awesome!

Good job, the game looks great. It's challenging and creative. I like that you design the levels in a way, that the player has a choice which mechanic he want to unlock next.

It took some time to figure out how to enter the commands in the beginning because the input thing was not in focus and it looked deactived  + there was this overlay.

If I have only one suggestion, try to make this little character move a little faster, it would be great for the pacing overall.

I've already said how much I think this game rocks on AliveDrive's stream but I'll repeat it again.This game is fucking awesome.It's hard to give criticism on a certain part because honestly I just love everything about CryptCrafter

nice work! I liked the graphics and color palette a lot,

Cool game very interesting , i like the graphics and the atmosphere very much, but i think it was a little too difficult, i wasnt able to avoid the monsters even in the first stage which is sad cause i was very curious to proceed further. Anyway very good job for only one week!

Hey, thanks! If you play again and choose 'hazards/health' for that stage, the game should become a lot easier! We'd love for you to experience the full game and hear your thoughts about the end (which is a little difficult, but not as punishing as that initial stage).

Awesome graphics, the music and sound effects are in place. Difficulty is also ok, but i had some problems with doding monsters when I had only 1hp :)

Your game has very nice pixel art. The colors have harmony. Unfortunately, I couldn't hear any sound or music in your game. It seems like you are trying to make the players experience what it's like to not have features and eventually have them in the game. A nice execution to a genuine idea!

Hey Bilal, thank you very much for your feedback! I'm having trouble finding the cause of the audio bug, as you definitely should hear sound and music! Could you please tell me, if you are using the itch.io launcher or a specific browser version and OS? It would help me a lot, as I can't reproduce the issue. /alex

I just ran the game again. This time, I am able to hear it. I don't know why there was no sound before.

Honestly, one of the best games of the jam that I have played so far. Theme fit perfectly, the art was good, the animations were good. Very innovative, and the most important thing.... FUN! Damn, that boss fight though. I encountered a few bugs along the way, one skipped an entire section. Not sure if it was on the browsers end or not because I wasn't able to recreate it. Nonetheless, very good game. I would suggest working on it further.

Wow... This was definitively my favorite game in this jam! It was so smart combining text adventure with the features implementation along the game, I've never seem something like this before! This game had me laughing when I kept going forward to see what happened, and it said I bumped into a wall XD
And the boss fight was hard, I died 3 times in it's second phase, but it was really fun!
I loved the pixel art and the animations, they were polished and cute.

I think I had a bug, because when I first playied it, it had no music, just sound effects. I thought it was because I choose Movement instead of Art and music, but when I restarted the game to try another path, the game already started with music. I don't know if it was supposed to behave like that. but it was nothing that spoiled the game.

It was incredible! You did great, keep up the good work!

This was fantastic :) !! Well done ! The story fit really nicely with the theme, the pixel art was super (I especially loved the player's death animation) and that boss fight was damn tough but rewarding !

This was a really neat experience! Very creative and the art is absolutely beautiful. The controls were a little clunky, and the attack seemed really slow. I heard from someone else that the game has sound and music, but for whatever reason, I never heard it :(

Hi! Thanks for your feedback :) You should definitely be able to hear sound and music in the game. What browser and OS are you using? I tried using Chrome and Firefox and I can hear it. I'm sorry it's not working for you.

I was actually using the Itch.io launcher, apparently with web games it launches its own little browser thing - now that I think about it, that was probably the issue!

I tried to replicate the issue, but it works for me on the Itch.io launcher. So I'm a bit clueless about the cause beside being a routing issue on your end, but saw a recording of your stream earlier and it looked fine! I will try to investigate further and still thank you very much for playing the game : ) /alex

really cool looking game, the dash is interesting, a lot different than usual dash's in games like this. It plays really nice, and has cool graphics.