A small level-editor game made for the Blackthornprod GAME JAM #1, in which the theme was "Game Development".
Submitted by Potreik (@patrickalfa) — 4 hours, 8 minutes before the deadline
Add to collection 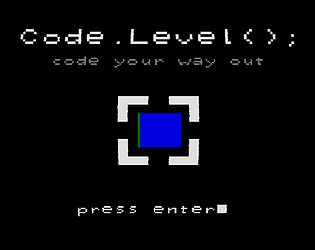 this is awesome but the controls are hard to handle

Yeah, I agree. I was crunching in my spare time to finish this game in time for the jam, didn't have enough time to playtest it correctly.

I never touched it since though, might come back to it one day, improve the controls and add some new levels.

This game is so fun!  The art style and effects (even in launcher, "old") were really adding to the experience.

The command system was really fun to use and the puzzles were pretty good.

You should add some stuff and release it as a full game on like steam!

I personally think it's a really great game! One of the games I enjoyed the most this jam.

I loved how you added a synth lead on v0.7 and the bass on v0.9. Still make sure your loops are fully seamless as you can cleary hear when the loop restarts.

While I have nothing to complain about here are some minor issues to think about in general:

- Sometimes for example I typed "left" instead of "l", you could have still accepted the full words (up, down, left, right), or not?
- I feel like you have to guess how many blocks you have to move to reach a certain point. Maybe it would have made things easier to add a very light (toggable?) grid to be sure how many blocks you want to move. Did you have any thoughts about this?

First of all, thanks for the kind words, this is the first game jam I took part on and I also started the development kinda late, since I had no idea of what to do for the half of the week, so it's really cool to see people playing my game and leaving positive comments.

I absolutely agree with everything you said. The problem with the music loop (and the fact that it gets ultra repetitive after just two stages) was a thing that I realized only the day after submissions ended, since I left to do the music at the end of the development, I was tired and just wanted to end it as quick as possible to go to bed.

About allowing the player to type "left" instead of "l", that is a thing that I didn't accounted for, but I can clearly see this as an improvement, for sure. And also, in retrospect, how did I not think about adding a grid? Well, thank you for the amazing feedback!

I am impressed. Really cool and immersing game! Great idea!

Would you like to check out my first GameJam submission?

It's a really cool game, with good graphics! I like the  concept of the game, it fits the theme very well :)

Already rated the game, so can you rate mine?