A new way to rocket jump
Submitted by SplitHare (@splitharegames) — 42 minutes, 39 seconds before the deadline
Add to collection 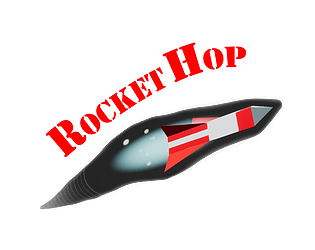 How does your submission match the theme?
The player uses a rocket launcher for multiple purposes. It can be used as a gun to shoot enemies, a tool for making platforms, and a way to block invulnerable enemies.

Third-party resources
I used UE4 to develop the game, Blender to make the models, and bfxr.net to make the sounds.

Very interesting idea that could be developed further, I see a lot of potential! You know what could be cool - letting players ride the rocket when its un-freezed!

The lighting is a bit problematic though as everything is so dark. Might want to add some global illumination to that. Platforming is also very finicky in an FPS setting.

Yeah, the lighting is awful, I need to give it some attention at some point. Glad you liked the idea, though!

The concept is really neat, but it's really tough to land on these small little rockets. Making the rockets sized more like large platforms would make the game more playable. Precision platforming like this doesn't really work well in first person.  I'd also consider making platforms automatically stick to walls to make the timing a bit easier. That aside, It's impressive that you were able to make a 3D game given the time constraint. Nice work!

Unreal does most of the hard work for you. :P

Yeah, but even just modeling stuff in 3D is super impressive. 2D is usually the safe jam option, but there are so many possibilities in 3D.

Thanks! I wish I had time to make some more detailed models during the jam, but I just had to go with the low-poly style. Just don't ask me to make something that has to be animated. xD

Animation certainly is very difficult in 3D, but I actually think that low poly art has a certain charm to it when done right. Maybe I'm not as jaded with it as I am with a lot of the low effort pixel art you see nowadays.

AMAZING CONCEPT not so amazing execution. My tips would be to 1. Increase rocket size or when they are stopped make them triple in size with a timeline, 2. Give some sort of explanation to mechanics in the description at least. 3. Don't make rocket jumps hurt the player. In all honesty I couldn't beat it but I would love to play an updated version of this my discord is Rav10#0860 dm me if you ever update this.

Yeah, the rockets are definitely too small to serve as platforms, but I didn't have enough time to change them up. I didn't want to over-tutorialize to the player. The controls are in the menu and I put the rockets right in front of the start area as a visual tutorial. I wanted to show rather than tell. As for rocket jumps not hurting the player, if there's no penalty for doing a traditional rocket jump, then there's no reason for them to use the rockets as platforms. Obviously, I need to play around a little bit with the balancing, but I think removing damage from the rocket jump would completely undermine the core concept I was going for.

I appreciate the feedback, and I'm glad you enjoyed the concept. Thanks for playing!

Interesting idea. It was hard to see where my platforms were because of the lighting and because of how small they were. Momentum made platforming on the rockets a bit difficult as well. Enemies were also all hounding me too quickly. But would definitely love to see this expanded!

Thanks for playing! The lighting was definitely a product of my delirious state at the time. If I do work on this more, I am certainly going to be tweaking the jumping mechanics and platform size. I'm glad you enjoyed the concept!

The idea was pretty neat, It took me a while to actually figure out I should rocket jump my way out of the room, but it was fun nonetheless. I ran away from the last enemy cause FPS is not my strong. The enemies were simple, but making more of them actually put a challenge and it was fun to freeze rockets before meeting them. I just missed some strict platforming sections to place rockets and such. Overall, fun game!

Looking past some of the bugs and lighting issues, this was a really interesting and well executed premise. I could see this leading in a lot of interesting directions.

I like the idea of Rockets for platforms, I think it's an idea with tons of potential. I think the game definitely could benefit from making the rocket platforms easier to jump on though. The ones right now are really tiny.

Good take on the dual purpose theme though!

Thanks! I was toying with the idea of scaling them when you stop them, but I decided against doing it for the jam.

The rockets for platforms idea is pretty cool, and the sound effect for pausing them feels really nice. Only problem is that a few times I could get past obstacles with 0 platforms by just rocket jumping.

Also you should probably round your health to an int, my health was at 4 decimal places at one point

Yeah, I didn't really block out the level with a rigid path through the environment. I wanted to give the player a couple options if they found the rocket platforms too tedious or difficult to land on. There are a couple ways to tackle most of the challenges in the game. I was kinda caught between making sure the players explored the concept and making sure they still had fun/I wasn't forcing it on them.

I noticed the health reporting to ridiculous numbers of decimal places, but I didn't really think it was worth the short amount of time it would take to fix for the jam.

Thanks for the feedback, and I'm glad you enjoyed it!

Pretty interesting rocket platform idea, lots of fun with those enemies rushing you. The boss was so tense since I had 10 hp :D

I didn't try it much as it was pretty hard to do but it would be a good idea to make it more rewarding to freeze a bunch of rockets in quick succession then release them upon your foes.

Thanks for the feedback! That's a great idea! I had a friend suggest a rocket barrage like that for platforming purposes, so maybe it makes sense to have that ability for more than one reason. It certainly would cut down on the repetition of shooting and freezing rockets over and over to make platforms/blockades enemies.

I think the rocket platform idea is awesome. The concept of jumping on platforms and creating them at the same time is just really cool to think about. It is pretty hard to jump on those tiny platforms though, even though the movement feels pretty tight already.

The combat is really neat, as I mentioned in the Discord, I love being able to shoot an enemy, watching where the blast puts it, and then lead the next shot based on where I think the enemy will land. If you've ever played Pharah in Overwatch, it's like shooting your Concussive Blast at an enemy, seeing where they're headed, then hitting them with a direct hit because you know exactly where they'll be.

Awesome submission with a clever take on the theme.

A really neat concept! Besides the fact that the lighting sometimes makes it hard to see where you're shooting or jumping, the core gameplay is pretty fun~ I like how you just let the player continue where he left off even after he died; no need to redo all the platforms you've already made! Really smart!

I really like the rocket/platform mechanic. It fits pretty well with the theme! You could try to add some more FOV and the pause manu does not let you resume the game.

Thanks, SantiMod! I was trying to strike a balance between setting the FOV high enough so you could see the platforms but not so high that people would complain about fisheye. Ideally, I would have wanted time to put an FOV slider in and make a smaller, nicer looking rocket launcher model. The menu was also a time compromise. I programmed the menu so that it's always the same main menu, regardless of if you just started a level, died, or hit esc. This means that it always destroys your pawn and then respawns it when you hit Play.  Fortunately, however, it does keep track of dead enemies and rockets you haven't exploded, so you can always just jump back in!

Very clever! The sky is the limit

Well, technically the killbox I put in the sky to clean up stray rockets is the limit, but I really hope you didn't rocket hop all the way up there. xD

Love the mechanic, allows for some great puzzle design. It took me a while to realize how the gun worked, so I feel it'd be worth investing in some type of tutorial or just a simple controls page before the game starts.

There is actually a controls page in the main menu. I should make it a little more obvious so people are sure to look at it. I didn't want to tutorialize too much, though. I like letting people figure things out, provided I haven't made it too complicated to begin with. That's why I placed the first couple rockets in the level. I figured if people saw a couple sitting there, hopefully they'd work out the rest. Thanks for the feedback!