A game about running into enemies head on
Submitted by Eli Vazquez (@RedOshal) — 7 hours, 40 minutes before the deadline
Add to collection 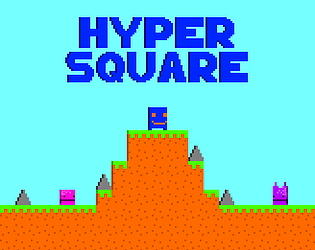 How does your submission match the theme?
Hyper Square

Hyper Square is a 2D platformer made for the first GMTK Jam.

The dash itself also serves multiple purposes. Not only does it allow the player to dispatch of enemies more easily, but it also increases the player's speed, allowing them to make jumps they otherwise could not. But watch out; the dash is uncontrollable and could lead players to fall off of cliffs or run into obstacles. Playing quickly is fun, but also dangerous.

You can also press M to toggle the music speedup feature, where the music is sped up while dashing. I have this feature turned off by default because it is somewhat choppy, but you can be the judge of that yourself. It's your funeral.

Suggestion Used: Megalon (Discord Username)
Came up with the idea for linking the dash attack to stomping on enemies. His suggestion proved to be invaluable as it became the core mechanic.

Such simple and great use of the theme! I like how you can hit an already hit enemy from underneath, extending you hyper movement and I like how the longer you hold jump, the higher you go.
The level design is well done, letting the player choose their difficulty based on the route .The 2nd level makes you think about timing and placement, keeping in mind that the hyper mode doens't allow you to change your direction.
On thing that might make it feel better is if you can jump if you drop from a platform. I would like to see better post-jam art and music if you decide to work on it more. Otherwise, really thoughtful gameplay!

Thanks for playing. Glad you enjoyed it!

An interesting entry~ While the mechanic itself was quite novel, the level design created a sort of... tug of war. It's definitely fun to jump on enemies and dash, but at the same time, the levels were designed in such a way to discourage you from doing so. Kinda like the water levels in Sonic. Still, it's a neat idea with promise!

Thanks for the valuable feedback! That's a really interesting point. While I tried to add obstacles that make it difficult to keep up your combo, you may be right that I went too far in a few places. Difficulty balance with level design is always a tricky thing, and this game in particular is a puzzle to design for because of the lack of player agency in terms of when you're able to start/continue a combo. Too few obstacles and players are getting high combos without having to try, but too many obstacles and players are getting hit out of their combos every time. Perhaps I should have focused more on elements that reward high combos and less on obstacles that make high combos incredibly difficult to pull off. I think if I had some verticality in my levels, I could do the Sonic 3 thing of having a faster, nonstop action route but also several variations on an easier but slower route. You can see this mentality come up in a few levels, but it's usually limited to two routs that converge almost immediately. There's a lot of experimentation to be done on how to do this mechanic justice. I'll be sure to keep your criticism in mind.

Love the simplicity, and absolutely hooked on the classic side scroller style. This is an exciting little game that I would find myself playing alot especially if it was a bit more flushed out. Way to go!

Quite a cool game here! It felt satisfying to use the dash mechanic into large groups, and the game had a few interesting level layouts.

I did feel like the physics were my main gripe, it didn't feel tight enough to pass levels without a lot of difficulty, although I understand how difficult good platformer physics are and won't hold that against you. The other thing is that some type of signal of when your charge is about to end would be nice, as I died a few times to my charge ending right before a pit or enemy.

It's definitely a concept with a lot of potential, if you added smoother physics similar to Mario, perhaps also something to make it more seamless (like walls that you could bounce off of) I think you could really push this idea forward.

Thanks for the valuable feedback! You're right that a signal for when your charge is running out is absolutely something that I should add.

Hey this game is a lot of fun! I like the combo system, it feels great to hit 3 or 4 enemies and hear the sound effect get higher in pitch. Thanks for the shoutout too!

My main complaint is that the levels don't really feel like they are laid out with the core mechanic in mind. I was hoping to combo through the whole level, but it doesn't seem like it's possible with how the enemies are spaced out. There are several jumps that are just far enough apart that when you bounce off of one enemy and try to plow through another, the combo timer runs out right before you hit them and you end up taking damage. Here's an example of what I'm talking about https://gfycat.com/TightAdmirableLeopardseal

Maybe the combo timer should only run down when you are touching the ground?

You did a good job on level design in the time frame given, I know in a game jam there isn't a lot of time to rigorously test levels.

I'm glad you enjoy the game! Also, thanks for the suggestion on the combo mechanic; it was really core to the game's development. I tried to add some spacing between areas in the level to give players a little bit of respite between major combo sections. In hindsight, having more verticality so I could have a slower route and a faster route through the level would help keep both novice and expert players engaged. But you're certainly right that some enemies are at that point where it's like a 50/50 shot at getting them before the timer runs out. I tried to minmize that by tightening the spacing, but I clearly missed a few spots. I think your suggestion about not having the combo run out in mid air is once again a perfect solution to the problem. Thank you for the helpful feedback!

Fun mechanic but the 2nd level seems to be really impossible. Seems like this could be a game which encourages speed runs. Audio is also a bit repetitive. Platformer controls are well done. Nice one!

I'm glad you enjoyed the game! Difficulty balancing is something I always have trouble with. It's the old issue of being too good at your own game to judge it properly. In hindsight, bottomless pits were probably a bit overkill. Replacing them with the spike hazards would have made the game more approachable for beginners. Anyway, thanks for the valuable feedback!

Killing a lot of enemies in a row is really satisfying. Good game that uses the theme well

My only complaint is the sound mixing.  I only really beat the first level, but obviously more enemies would be nice. I also felt like maybe combos should get you health back (unless maybe I just never got a long enough combo for this?). As it stands, other than just feeling awesome, there's not really an incentive for getting combos.

Thank you for playing my game! Audio mixing is definitely something I should have put more effort into. There is another enemy that gets introduced, but it isn't until the last level, which is a problem with the game. The second enemy has spikes on his head so you can't jump on him. The only way to beat him is by dashing through him. There are also static spikes and bottomless pits that get introduced. The main incentive for getting long combos is to get a better score. You get ranked at the end of the level based on enemies killed, combos, and time. But you're right that there isn't much of an in game advantage to combos. I guess the spike enemies sort of give you an incentive, but they don't get introduced until the last level. Your suggestion about giving the player health for combos is definitely a good solution that would make the game a lot more fun. Thanks for the useful feedback!

Pretty good!  I think this game has a very fun mechanic!  The music is a little annoying though.

Glad you enjoyed it! Music is definitely my weak spot as a solo developer, but it's something I hope to get better at.