Submitted by SkullBat Studio (@SkullBatStudio) — 4 hours, 46 minutes before the deadline
Add to collection 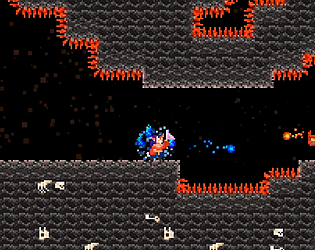 How does your submission match the theme?
For the purposes of this game jam, we combine offense, defense and platforming. Every action at the player's disposal serves at least two purposes.

The character has a limited number of dash charges that also act as her health. She can deflect bullets back at enemies to hurt them and regain a dash charge. By dashing through enemies she also regains a use of her charge. We also demonstrate how dashing can be used to avoid hazards, and how well placed enemies assist in traversal. Getting hit looses a dash charge, and getting hit without any charges causes game over.

****Default Controls****
(can be edited in launcher)
-Dash: Space
-Deflect Bullets: X
-Arrow keys for movement and to determine direction of dash/deflect

Third-party resources
This game was built with Unity. All assets were made by Team SkullBat with software we hold licenses for.

Ooo, a really pretty-looking game! I really dig the pixel art and animations! It takes a while to get used to the jumping mechanic, and I barely noticed that my health was tied to the dashing... but otherwise this game has potential! Quite satisfying to jump from surface to surface and hit monsters!

Pros: The dash is cool and i enjoy latching on walls. The tie to the health makes it a game that takes some strategy.

Cons: Rough gameplay, I feel restricted and slow, And after dying I had to sit and wait.

Keep up the game creation, keep refining, and way to go

Really cool game. I think the main issues are that the dash aiming could feel better and the walking really sucks. Other than that, you guys are on the right track with this one.

Thanks for the feedback, we completely agree!

Footage of the whole prototype level.