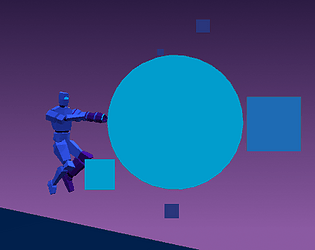 Solid use of mechanic for the theme! Feedback feels great and game has a nice style. Not sure if in but requiring shots for certain enemies would be interesting. Like a shot to open vulnerable spot that needs to be melee attacked with your body. Cool stuff!

That was an awesome game! The main mechanic felt fluid and like it belonged, the slowdown felt well executed (although it can get a bit annoying with the music constantly changing tempo) and combos felt meaningful and satisfying to get, I even got to 21!

Since I always like to give at least one idea of how people can improve, I do think charging in rapid succession felt a tad bit annoying due to how getting to max power worked, and I found combos would occasionally end for me due to me not being able to build enough power to kill an enemy. Perhaps if max power didn't require your cursor to be at the edge of the screen? (I admit my game had almost exactly the same issue xD)

Despite this, the game is really solid, and perhaps one of the best in the jam!

Thanks for the suggestion, it helps a bunch! I had a feeling that changing the music tempo was odd, but I can fix that. Glad you enjoyed it!

Ended up launching myself at all the enemies and only used shots on switches, but that was really fun to play! Love the time dilation when you launch yourself. One of my favourites!

So satisfying gameplay! I think too many games in this jam have used gun recoil as the dual purpose mechanic (with somewhat mixed results), but you really nailed making this mechanic feel new and fresh. I definitely want see more of this game. Overall 5 stars!

Thank you :D I had a feeling there were going to be a lot of recoil games but I felt this particular concept was still unique. I'm glad you liked it, that means a lot.

This is one of my favorite games of the jam so far. The idea is simple and elegant and executed so well. The music and art style are serviceable and the gameplay knocks it out of the park. Bouncing into enemies and smashing the hell out of them feels so fun. When you chain into a bunch of enemies, you feel unstoppable. You absolutely should make this into a full game. I would pay real life dollars for it. The only issue I had was some instabilities in the framerate. It wasn't too bad until I switched into fullscreen mode, and then the game started chugging super bad.  Other than that, great effort!

That's great to hear, thank you for your comments! I'm glad you enjoyed it. :D

Sorry about the framerate, I'll work on fixing that. I am pretty interested in making it a full game, so we'll see how the results do.

The slow motion is a really nice touch that goes a long way to making it more play better and feel really good.  Comboed 4 enemies in a row and the rising pitch made me feel badass. Awesome job.