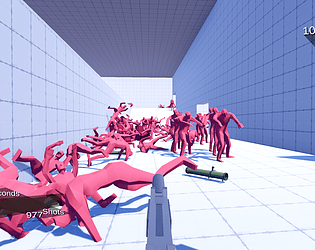 I wish the barrels had done more damage to the red guys, but I get that physics are hard to come by in a tight time constraint and a WebGL build -- great job making it as performant as it is on web (though full screen tanks the framerate on my machine [using FireFox]).

I loved how chaotic this game is. Very original take and representation. Well done!

this was a BLAST, i loved it so much

i don't want to play it again, really, but i got like 59 kills or something and i really, really got the theme. out of control!!!

Fun design - hard in a 48 hour game but environment stuff would have helped the game a bit. fun weapons and nice explosions.

The idea is really cool i had some fun. Think it could be taken further with some environment and character art perhaps. Multiplayer could be really cool, like a really hectic gun game.

The visuals are nice. I like how there is a lot of things you leave behind you when you travel around! I didn't find the gameplay too interesting (maybe because I don't like FPS), but thumbs up for the weapon variety!

Nice fun game. Might help a bit if we knew what weapon was going to come up next. Nice weapon mix too. Well done

That was loads of fun! Great job on everything! This could be polished to be a nice arcade game! great job

Now that’s a shooter i can get behind! This is just pure crazyness and with that also alot of fun. This defenetly feels out of control! This might be the perfect game to play when you are tilted :D. The only thing that i would improve is, that it’s really hard to distinguish enemies that are dead from the living ones. I would maybe change their color or something that you can focus more on killing the enemies that are still alive.

Yea, this was super fun. Holy hand grenade reference was great. Obviously there are some bugs. A lot of the explosions don't seem to kill the zombies in an adequate way.

Still, max fun. Very good. You have a good game on your hands potentially.

I really like this idea. This feels a lot like a prototype more than a completed game to me, but that's okay. I think this has a lot of potential to be really fun. Some minor complaints:

* My framerate was horrible in fullscreen mode, it was fine the second I left fullscreen. I like to play games fullscreen, as I get distracted by other applications easily when I can't. But it was very hard to aim with the low FPS in fullscreen.

* It was slightly less hard, but still hard to aim when I had better FPS in non-fullscreen. This is entirely personal preference and came down entirely to the sensitivity in which I can move the reticle to aim. If I don't have a slider to adjust the sensitivity to my liking, I'm almost always going to struggle. Plus there's never really a perfect sensitivity for first person shooters since everyone likes it to be different.

* The UI didn't really pop for me. I know it listed the number of shots I had left still. I'm not sure if it's the placement, the font size, the font itself, but something made it just feel weird to me. It was hard to watch that and what was happening on the screen at the same time.

* It was really hard to figure out when enemies were coming up behind me to attack me. That's okay if there was some indicator for it, but I didn't see / hear it if there was one.

I really like this idea a lot and I think it could be a lot more fun with some polishing and quality of life tweaks. Better visual communication, UI, and FPS would make it really fun for me. That being said, you made a game in 48 hours. That's a hard thing to do. You should be very proud :)

Damn, that sounds like you hated our game. Big oof.

No, I really like the concept. I was recommending ways it could be improved if you decide to continue development or for future projects. I think it's important for developers to try and improve their work as best they can, so I was just trying to recommend ways to do so if you wanted to :)

Crazy and fun. Love the Holy Handgrenade, wish it was a bigger explosion haha.

Submitted
AFK on a UFO
LikeReply
Stupid RobotSubmitted2 years ago(+1)

Really fun. With more juice (and blood, hehe), it could be epic!

Agreed. Blood for the blood god!

A simple and funny little game.

very cool! the concept is very clever, I enjoyed it even if it's a bit hard for me hahaha, keep going! rated! please check out my game too :D

Submitted
It's Over
LikeReply
Quentin DelvalletSubmitted2 years ago(+1)

184 kills and got stuck in a corridor with barrels. I dig this, it's a cool idea and pretty well executed one. It's fun ! I kind of wished there were more weapons ! Also, the shotgun feels very good :)

I think this game has a lot of potential and could really benefit from some time taken to polish it but I really enjoyed it and am glad to see an FPS in the game jam. Hope you build on this idea some more in the future.

The first FPS I played this jam, so that was a nice and refreshing! I thought the controls were great and fairly snappy, and it hit the theme pretty well. As someone else mentioned I found that only my first grenade exploded, unless I was doing something wrong. I think I also would have appreciated more feedback from the machine gun, like bullet tracing or small bullet holes. Great work, and great submission!

Submitted
Save My Robot
LikeReply
SadSmileGamesDeveloper2 years ago

Granades do explode! The in-game feedback of them exploding is simply so weak that people don't notice so i kinda messed that up ^^

I really like this! Great variety, good mouse sensitivity, funny...