Sorry about your feet.

I loved it. thanks.

this game is all about ~the human element~ so leave a comment! take a screenshot! yell at strangers on the internet! (but yell with kindness)

Hey! I like playing games and saying what I think about them. I realized I maybe shouldn't be yelling public criticisms on twitter though (as was my habit for a month or two), so I've put to words some critical, opinionated feedback on your game as a player here in semi-private. Feel free to hide or delete if and/or when this is not the kind of stuff you want floating around your community! I won't mind at all. But I thought you might find this useful.

So I'll put the good stuff first and then the bad stuff after.

But honestly it'll mostly be bad stuff, not because your game is bad, but because I'm picky as hell and usually even when I'm trying to play something to enjoy myself all I can do is think about it as a design project :P

Oh, and... I beat the game, but that's it. I got the first achievement. More on that in 'bad stuff'.

The game is short, sweet, quick. Falling so quickly to the next room is still a bit disorienting when I'm trying to catch my shell from the previous room and the invincibility period is also a bit disorienting but I'm a big fan of how it cuts to the action so fast. No time wasted.

Related to the above: the enemy design is pretty basic, but it's good! The worlds are short and don't overstay their welcome. The enemies within each world differentiate it from the previous world.

The basic action of shooting an enemy and catching the bullet which I used to shoot that enemy is pretty satisfying when I do it right, especially when shooting enemies from above and the shell jumping up into me while I fall into it. That interaction feels great. I'm also a fan of how enemies interact with the bullets (the bullets get floated up by them, kind of this interesting unpredictable element to add to catching the shell).

Holding the jump button to shoot down is a little bit... awkward. If I press left and shoot, I get immediate feedback despite the animation, which is good, it's great, it's what I was hoping for. If I hold jump and shoot, the timing makes what happens kind of ambiguous in a way that is inconsistent with the way the left/right arrow keys interact with shoot direction.

Perhaps I wasn't in love enough with playing the game to get more achievements, but it felt very unclear how to "really" beat the game. Possibly attempting the other achievements would have gotten me there? I played a couple more times and then quit at this point because I didn't really feel like I had a direction to go in. YMMV as other players more interested in / willing to spend time digging around may not give up as easily as I did. I'm an impatient fella.

EDIT:: This possibly belongs in 'personal-taste' section. I never got the impression I was in a whale's gut. I pay a lot more attention to systems than to visuals and to top it off I played in a well-lit area so probably some of the darker details got missed. There were no gut-like enemies, no gut-like mechanics. there were elevators and rooms and I was a guy with a hat and a gun. If contrasted against a setting that genuinely communicated "I'm in a whale's gut" I think some of these elements could be funny, or cool, or weird -- but there's too many incongruous elements. Instead of feeling like "I'm in a whale's gut and there's elevators down here, how weird", the gutwhale part really plays second fiddle and I pretty much stopped thinking about it completely, past my first run. (Which may be fine for your purposes! I didn't really worry about it until I thought back and remembered, huh, right, this game was called gutwhale...)

Your combo system doesn't communicate itself very well. It's hard to tell where I'm at in my combo (am I at 20x or did I just screw up so this next shell doesn't actually matter?).

The "shell catching" activity required by the combo system feels... curmudgeonly to me. Very picky. If I miss an enemy, the punishment is pretty severe. Enemies that take multiple hits make catching the shell super hard, whereas with most enemies it's very easy. Clusters of enemies make it difficult. I guess what I'm saying is the risk/reward matrix feels really inconsistent and not in a joyous and exciting way, just a kinda sticky, annoying way.

OK, now take all my feedback about your combo system and the "shell catching" with a grain of salt because: I'm not a fan of combo systems, at all, and I never have been. That style of perfectionist don't-break-your-combo playing just straight up clashes with my desire to screw around and play freely within an interesting system. Trying to catch a shell never feels like something I want to play with, and only ever feels like something that I have to do. I found it restrictive, but I almost always find combo systems restrictive. So I'm probably just the wrong type of player.

The soggy bottom bun of this compliment sandwich.

You made a game in a month! Congrats! I just wanted to end on a good note. Like I said above I'm not really a combo-lover or a rogue-lite-lover, so it's difficult for me to say what's great or what's not, but I hope you can find the people who will absolutely adore your game. I apologize for not having more good stuff to say; genuine positive feedback about what someone loves is so much more important than posts like mine :p

The prototype was 100% about the chaining, and I feel like the 3 hits helps the chaining feel more powerful by comparison.

(I also enjoy the awkwardness of having to hit a specific block in a difficult spot 3 times in a row, but that's probably just Stockholm syndrome)

Ah yeah I was super lazy with the spriting. The direction of the arrow doesn't really make any sense :P

Super helpful, thanks a million for the indepth feedback :)

I'm probably leaning more in a 'flower breeding Candy Box' direction -- I guess you didn't notice the door on the east side that can be unlocked for $100.00! I definitely need to work on my UI and stuff (it just looks like a blank grey box until you're bumped up against it), but on the other side is effectively a "bigger garden" among other things. I love the idea of spending money on organizational tools though and I'll give some serious thought to expediting the main process as a reward/investment...

Should be fixed now. My fault for not testing on windows first :P

i hope that the full release, when and if it comes, maintains this demo's brisk pace while bringing something structurally new to the table. 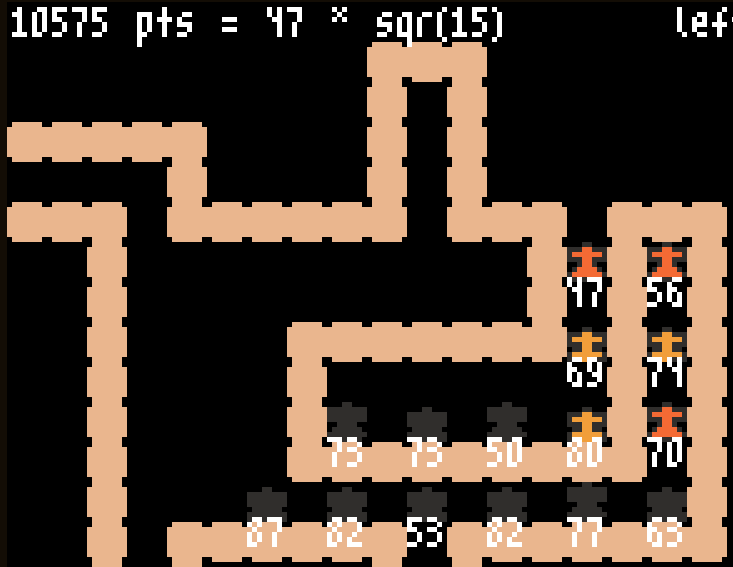 Tried maximizing towers. This was juuust manageable, but still a wide gulf between strongest and weakest (almost double)

Oops! Thanks for catching that exploit. I'll fix it. (edit - it's been fixed!)

A lowest score of 127 over 6 towers is pretty good :O Did you find yourself clicking towers on/off a lot to manage that? I tend to have little patience and build a ton of towers and always somehow miss one very low score tucked away in an unnoticed corner :c

i'd be interested to see a version where i'm trying to fight against things falling apart and see if it makes anything good!

i don't know if there's anything secret to find like there was in ruins, but... i like this mode of interaction! found myself building patterns. sorry i didn't take a screenshot.

note: used a font by daniel linssen (managore) for those numbers in the bottom!

I have one more  playable in me though! Post your last-minute playables here, I guess/ :P

I can't adjust group settings without adding new groups (since I have to click to drag a slider)!

Stopped partway because I feel like I should be playing without cheating: I allowed crew members to move through occupied spaces, but I don't think I should have allowed that. I started with 1 crew in 1 room, because there were no rules for setup... next time I think I will start out with a more built-up ship just to see how that feels :)

I'm a big fan of how as the ship becomes larger and more productive, the events become increasingly disastrous.

it recharges them! so you can re-use the good ones. but yeah it also deactivates them

southwest to infinity? you wrote the code, you tell me

soo solid! also, i love 『the TV show』 so much

wait wtf is this grey square

Whooa I like this, how'd I miss this? It's a bit rote if I try and pave everything but placing the generators so everything is covered but there's no blinking tiles is pretty neat

Also I got myself stuck oops ): I like the small grey corner bits

I got excited about this flag I made so I wanted to make a boat.

Judge for yourself how good this boat is.. 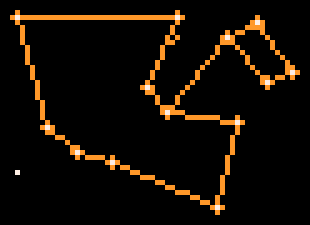 ooh, if only this one was my ninth playable...

you can play it here https://droqen.itch.io/nine-shrines

it's an attempt at a broughlike playable,.

i'm very happy with the grey void area that accidentally happened :) :) in general being very slapdash about what the shrines do, and about the whole arc of the game, meant that i could actually finish the dang thing. it was more important to have all the shrines doing something than having them all do the perfect thing, which is what prevented me from finishing this concept before during 7DBL. i mean, other things stopped me too, but i have been trying to get over my perfectionist completionist nature when it comes to making big weird systems. instead, embrace the big weird!!!

the logic behind shooting is so weird! i thought i had it figured out, but "m" doesn't shoot 3 bullets down...

It doesn't always run... sometimes I have to refresh the page to get it to run :x

yeah, that's the Unity build and it is messed up in a different way :)

Regarding the jittering, I think it's because of the way I'm handling velocities of things bumping into each other -- the position is most definitely rounded to full game pixels, because otherwise the pixels would be hideous! but I'm not sure how to handle the case where pushing against something flickers you back and forth across the boundary.

In this HTML5 Godot build there's none of that weird subpixel rendering trash like in the Unity build, is there?

I cloned my own game to get familiarized with godot.
It went smoothly, but it seems to run pretty shit in the browser.

just testing out godot by cloning my project from a few weeks ago, "being jeweled"! is it just me, or does it run kind of... badly?

Maybe aanother way to say that:

I haven't posted instructions that communicate the entire playable, but I have designed an entire playable and this is like... evidence that it exists.

I didn't write it out too well tbh :) I think I would like to write out clearer instructions, I'm just lazy! I think when it comes to the legitimacy of "playables", usability-by-others is entirely optional, but very useful for obvious reasons. It's something I'm coming to grips with over my ongoing internal playables-vs-games debate.