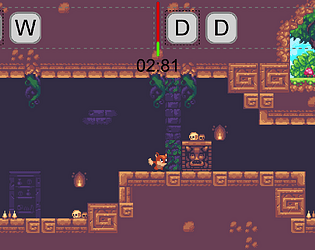 Ranked from 274 ratings. Score is adjusted from raw score by the median number of ratings per game in the jam.

How does your game fit the theme?
The Player collects controls which he has to use to advance though the levels and dies if he runs out of Controls

Interesting idea, but the movement needs some work to refine it.

I enjoyed to play it!
Great job!

A lot of submissions have shifting controls, but I liked how you give player some control over what would happen next.

This was a good looking game. The jumping and movement doesn't feel as good, however. Games like Mario and Celeste have a coyote jumping, buffer jumping so the player does not have to be frame perfect when they land, etc. I feel the player moved to fast to see spikes and alot of air control but the speed is more personal preference. A really good game for the short amount of time but you can improve it by adding better platform movement as stated above.

the gameplay is very fun, however the spikes were too tiny and with the hight speed I could not see them coming

Core idea is good, i just couldn't see the spikes and died a lot because of that.

yes spikes are non noticeable, but game is really fun. And I like all the informations you provided.

At its core, it's a pretty straightforward platformer, with the twist being that control keys are treated as a resource and also health. It comes together nicely, but it could probably be zoomed out a bit more. When the player is hopping on platforms higher up, the vertical visibility of the next platform or any spikes on the ground are very low, which creates unfair-feeling deaths sometimes.

To go by the 3Cs of the so-called Czerny Method, the character and controls are fine, but the camera is a bit problematic. With the fairly demanding timer chasing you and no checkpoints in between, the player must essentially either memorize the whole level or really master the controlling mechanic. If the latter is the designed expectation, then I would suggest spacing out the difficulty ramp-up a bit more. Otherwise, perhaps a bit more lenience on the timer or pick-ups that give some leeway (i.e. time stop, time extension, etc.) would help.

Also, letting the player know that Space = Jump from the start would be nice. I did not figure that out until about 5-6 deaths into the second stage, which requires it. I know that the first in-game sign says it, but I think it should either be made clear in the HUD itself or be included in the Menu's "?" button description. I read the "?" note before playing and then went straight ahead without reading the first sign. As the game does not pause the timer while you read (unlike the info boxes in Super Mario World).

On the one hand, I applaud the level design, which low-key teaches you as you go, including the spike pit at the start of the second level (ensures the player learns to jump). On the other hand, longer levels + low visibility + tricky spike placement + no checkpoint feels rather punishing at times. However, if this is meant as a kaizo platformer lite, then I suppose it is working as intended.

The polish and production come together well, but unfortunately the presentation score will not take those into account since they are pre-existing assets.

In all, a nice and balanced-feeling game (minus the camera) that successfully messes with player coordination as intended. Nice work!

P.S. There seems to be a collision/platform bug when the character hops onto the very edge of a platform at an awkward angle. They get pinned there, and the player must move in the opposite direction and make them drop (the only way). The character neither slips off or climbs on automatically, and they also cannot jump again to recover onto the platform.

Thank you very much for your feedback
really appreciate it

yeah, I tried my best to have the player to first get comfortable using different controls and then try to get better and master them.
Difficulty curve could have needed more testing and tweaking, just didn't have the time left after creating the levels.

I'll make sure to improve the way I convey the controls to the player,
I thought leaving plenty of time in the first level would allow the player to start slowly and read the information on screen,
I guess just having a timer makes this difficult, especially when you don't know how long the level is and how much time you need.

I wanted to have it be a bit more on the difficult side, but not go full kaizo.
I tried to provide a bit of a challange but didn't want to leave anyone out .

As mentioned on the game page, after the level design and creation depleted most of my second day
I didn't have the time left I planed for improving the other aspects.
Camera and Physics could have needed more love.

There's noting I can say about this game that you haven't already said.

Submitted
Out of Time
LikeReply
BolsaSubmitted2 years ago(+1)

I like the game! Good work at this jam!

its too hard and frustrating dont like it also pre used assets :/

Sorry to hear that,
may I ask what the problem was?

Were the controls to complicated or was it the spikes?
I tried to use the spikes to slow down the player and not have him just sprint though the level.
I might have overdone it and they are a bit hard to see.

I used Assets from the store, because I'm not really good with Art and time didn't allow for it.
This was my first Solo Game Jam, so I prioritised to finish in time.

Great fast pace gameplay, and then you stop… Shit which keys should I press!! haha. Only feedback would be that the spikes sometimes were impossible to miss or react to because of the visuals and speed. Great game overall :)

Fab idea - I love the collectibles becoming the controls as you go on, and think there could be a real strategic element to your choice of letters in future. Also the spikes could be clearer as they're currently a bit too easy to stumble on - great concept and one to keep exploring

It's a neat idea and a cool spin on the theme :)

The jumping is a bit finnicky, especially on the slopes, and the camera can be a bit unhelpful on the high ledges because you can't see what you're dropping into on the ground below.

Really like the base idea, you could do a lot with that. I just tune up the platforming a bit, possibly by slowing down the character and widening how much they can see.

I've done a lot of games using this asset pack, it's really great!
As for the game, it was a good fit for the theme, but I believe it could be better explored! But it's a good project, keep developing, it can become a great mobile game!

not really sure on how to have controls switch on mobile,
best I can think of is changing the location of the button

Very fun game, I liked the art and the music. I think it needs more feedback to the player when a control runs out tho.

In the beginning I thought of a little animation where the new controls would briefly flash big on the screen to indicate a control switch,
but there wasn't enough time to implement it

Had fun playing this! Loved the visuals and the sound! Had really nice physics which some similar games have failed on. Only thing I'd add is a warning that you're about to lose a control. A few times I stopped moving and took me a few seconds to realise why.

Feedback for the player when controls change (or are about to do so) was suggested a few times,
will defenitly think about it if I continue on the game

I had a little animation in mind, but not enough time to implement it