The trajectory of an old TV's speaker
Submitted by Gus Costa — 11 minutes, 47 seconds before the deadline
Add to collection 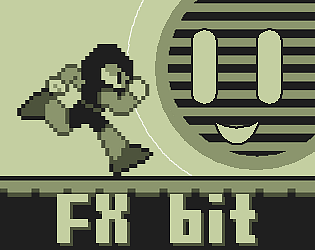 How does your game fit the theme?
In FX bit you don't control the game at all. Instead, you need to help an old speaker to read the game's sound fx.

This game looks and sounds amazing :O
I made it to level 7 :D
Thanks for the game !

Submitted
Too Many Bullets
LikeReply
SamStallionSubmitted2 years ago(+1)

The ninja gets three hearts but I only get one! I was a little frustrated at first because I was watching the ninja and the cool action, but my timing was off. Watching the rhythm below was more fruitful, but I missed out on the action. This game came out wonderfully, well done!

I'm really glad you liked it.

this game is very cool! i love the art style (8 bit? 4 bit? i don't really know hahaha) the concept is very clever, i really like it! with a little bit of improvements this game will became Amazing! please consider making a mobile port, i think it would be a big hit! please check out my game too :D

Submitted
It's Over
LikeReply
Gus CostaDeveloper2 years ago(+1)

Thank you very much.
I was thinking about making a mobile port, but my GM licence is just for windows.. =/

What an absolutely fun game! I am a massive fan of pixel art in general and this is some good stuff. The actual UI TV monitor is always a look I have personally loved. The actual game play is a good twist on a rhythm game.

The only issue I had with it is it feels like the bounding box/timing for the jump/S/arrow seems off. It looks like I should be able to press it maybe a pixel earlier than I actually am. I was able to make it to nearly 4000 points but the timing for the jump kept throwing me off. I think a big part of the reason for this is the character also starts to jump before I am actually able to press the key. I may try replaying again later but blocking off the top bit so it's only the scrolling button pressed.

Overall this is a great jam game and so far the one I've spent the longest playing. I was only intending to spent a few minutes on it because it seems like a fairly simple concept (Which is a good thing) to be honest. I spent over 30 minutes playing and enjoyed every second of it basically.

The only thing I would personally suggest, besides for changing the timing slightly on the jump/S/arrow, is key rebinding. Personally I would have them something like C - Coin, J - Jump, and A - Attack. Spreads out the keys a bit but then they correspond to each action.

Wow! Your comment really made my day! Thank you so much.
I didn't had time to properly test the game before submission, so there are some issues and bugs. Is so stressful to dev a game in 48 hours! Haha
But thank you for the hints. =)

Keep up the good work my friend. I look forward to a post jam release. :) - Deer

Really like your game but I'm very bad in this kind rhythm game. Very charm characters (everything about my childhood) and color palette from game boy suits very well.

Thank you very much for playing! =)
Are you from brazil?

Extremely well done game, the theme is incredible and the protagonist is so charismatic. The game also has a short but fun story, congratulations to the Devs!

Really unique and interesting style and concept here! I think the timing was just a tiny bit off, but then that's something minor tweaking would solve, other than that though, really great game! :)

Thank you very much for playing it! =)
Yes, I'd felt that about the timing too,... But I didn't had much time to test it before submit the game to the jam! Haha
I'm glad you enjoyed

Cool game! The presentation is really nice. I would just increase the time window for pressing the buttons to make it a little bit more easy for beginners in the game, but other than that, I never saw a game in which your objective is to produce the sounds! Quite creative =)

Thank you man! I appreciate that =)
Yeah.. The problem with a 48h jam is that you don't have much time to test the game and adjust the features.. After the submission I already modify a lot of things! Haha

This is so good and well executed, well done!

Oh man.. I'm sorry you thought it was a platformer.

That was my way to get to the theme. You don't control the character. I made a rhythm game focus on the sound effects instead.

yeah i guess it was my bad for not checking the tags.

as far as rhythm games go, it looks pretty good

This was a really interesting take on the theme! Very cute graphics and smooth game-play. The only thing I'd add is that after a game-over there should be a button to restart as I had to quit the game every time and re-open the app. But overall, great job  guys!

Thank you for playing! I'm glad you liked it.

Actually, you could use the escape key to quit.. I just forget to put an indication on the game over screen =/

I love the art style of the game! and great interpretation of the theme!! great work!

Thank you very much for playing =)

I love the reasoning behind the game mechanic, I mean, it's technically a rhythm game, but all the context around it makes it something different. (also, the art and music were on point, great job!)

Submitted
No killing while I'm away, please
LikeReply
Gus CostaDeveloper2 years ago(+1)

Thank you!
I tried to focus on the context and escape from messing with the controllers or something like that.

Really fun and polished game. It felt almost like a 2D rhythm game

Submitted
Into The Blood Room
LikeReply
Gus CostaDeveloper2 years ago

I really like your take on the theme. The end result is really pollished and you clearly put a lot of work into this.

I'm not that good at rhythm games, so it was really punishing for me when I just pressed a button a bit too early, maybe a next iteration of the game might be a little more forgiving and only drop half a heart when you're close enough?

Submitted
Take One For The Theme
LikeReply
Gus CostaDeveloper2 years ago

Thanks for playing!
That's a great ideia! I will do some modifications and bug corrections this week and maybe I implement that in the code. =)

Fun game! I loved the aesthetic as well.

Main issue for me was I was so fixed on the bottom bar so I couldn't really keep track of the "game" being played.

Thank you! =)
I tried to put the icon bar on the background, but it was too confusing to play.

Wow I love your presentation. It's a really nice idea! Keep creating games!