Get to your other half to merge together into one
Submitted by khoolahan, Sal Brown (@SalBrownArt), Jack Shimield — 2 hours, 38 minutes before the deadline
Add to collection 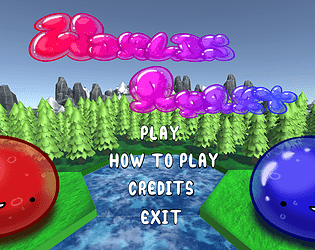 Holy moly! You did that in 48 hours? how? ^^ I can only agree with what others said.  But I also think you missed the fokus a little bit, for that you focussed very much on the look and very less on the actual gameplay; :/ Sorry, that I can't give a good rating for the latter

Hello!! This was really cute!

I liked the way you have to take a look and the map and start imagining the routes and places you can go, and even went some places in ways i'm sure weren't intended but were still possible thanks to the mechanics, hehe

loved the 2d art! i hope all the game was done in that artstyle itself, i think it could have been great looking. also the joining animation is unreasonably cute, hehe.

Submitted
Only One Tower
LikeReply
jerryardoSubmitted3 years ago(+1)

loved the slime animation when you join!

Great art and concept! Wish there was a little bit more drive to get a lower score. Cool mechanics!

I really liked the "Get the lowest score you can" focus in the game, makes you really think about the map and how to traverse it and what items to get and not to get, although I'd have liked that idea being more enforced in gameplay moments, off the top of my head I could only think of giving a maximum score you could get in any given level or something like that.  I feel that the concept of "only one", even though you could have implemented it into the game (maybe by only carrying one item at any time) , was interpreted with a certain originality and pureness that the game breathes, supported by the music and art style.

Another thing I thought of while playing the game was that it would be more engaging if the player had a certain obstacle or enemy that made them think faster about their actions. As it is right now, you could wait whatever you want to take your next action, and that could possibly suck the fun out of the game.

I feel like, with a harder focus on getting a low score and a good level design (which I won't comment on because it's not something that I know enough, but in my lack of knowledge, I found it good enough in your build), it could actually be an interesting game.

Submitted
ONE BULLET, ONE LIFE, HALF A MINUTE
LikeReply
beanc16Submitted3 years ago(+1)

Hey, I posted this review on discord for you already, but thought I'd post it here too for others to see.

The concept itself is pretty cute. Speaking personally, I'm in a long distance relationship (dating the artist I worked on my game with) so the title and concept honestly speak to me on a personal level.

However, my first impression of your game when I saw it was "I can't read that title in the promotional image because of the font and colors". I imagine it was a choice made because of the multi-colored slimes that combine together. But, the colors and font on the main menu and promotional image are very hard to read in my opinion. If i didn't see the title of the game on itch, I'd have no clue what the game was called. The credits page in-game is a little better, I can read everything. But the coloration make it feel a little...generic? for lack of a better word. considering this is in your promotional image for the game, I wanted to bring it up to you. for me, the first impression being "I can't read that text" isn't a good first impression to have, in my opinion.

regarding sound design, everything is relaxing. the sound does what it's supposed to do, it's fairly good across the board.

regarding gameplay, it felt like there wasn't much to do, I suppose? the whole game is collecting items to combine the slimes together. however, it's just moving around the map. nothing to make it stand out, at all. take mario for example. he has fun movement, has to avoid enemies, his jump is always fun to control, he's a joy to play as. but here it was simple wasd controls moving around. it wasn't horrible, mind you. the gameplay just felt a little bland to me. it felt like a "that's it?" type of thing when I did the first level. I understand the minor puzzle elements behind it, but sometimes I was unclear as to what certain items did or even what they were, beyond the boat.

my overall impression of the game is, it has a really cute concept and I want to love it. but it felt like it was missing something gameplay wise, like it was a little too simple, I guess? it's hard to put exactly what I want to say into words, but I think that's my overall thoughts on it. I want to like it, and it's okay, but it feels like it's missing something. but, you did make and submit a game. that's a major accomplishment and you should be proud, it isn't easy.

The movement is a bit awkward, but the concept and art is great!!

Thanks :) yeah had a bit of trouble with having the camera tilted to see the 3D artwork properly - meant the 2D sprite (which wasn't on the ground due to the trees/mountains) didn't look like it was in the same spot as the collider. Could've had it properly top down to fix that but would have lost the depth of the 3D stuff! Didnt really ahve enough time to come up with a better solution

game is fine, you got a concept and pulled it off well, the only problem with it is a very loose interpretation of the theme. For example, being able to hold only one of the items at once could have really helped

We just wanted to do something a bit different as figured lots of people would go for the 'one item/one life angle etc.

Totally get it, the only thing separating a lot of the games in this jam are their execution of similar ideas. Going off the wall is not a bad strategy.

Submitted
The only NeOne
LikeReply
khoolahanDeveloper3 years ago(+1)

Love the settlers of settlers of catan aesthetic! Also like the idea of needing to choose between resources for maxim efficiency. Good game!

Nice relaxing simple game :) It definitely does use the theme but it's not exactly tied into the gameplay in any interesting way. But it's cute.

Submitted
Next One Tactics
LikeReply
khoolahanDeveloper3 years ago

Thanks :) we wanted to take a bit of a different spin on the theme as thought loads of people would be doing 'one life/one item' kinda games

There definitely are a lot of that lol, but it's nice when someone can do something unique but having only one thing is integral to the gameplay. Like another person has said, you could replace the other slime with a goal flag and it would be the same thing. Perhaps that's something to think about, and it'll help you in the future :)

Relaxing game, but nothing special. I can understand that you have to get to your special one, but replace your other with a flag and the game wouldn't change.

Fair enough, we wanted to take a bit of a different spin on the theme. The idea is to get to your special one via the most efficient path to merge and become 'only one'

I would only make the blue slime's colission larger so they merge into the purple one inmediatly. Lost a few seconds here and there just because I missed him.

Thanks for the feedback! I kept it small so the animation would look better but yeah it does complicate the end of the level a bit. Btw its scored on the tiles you go over not the time :)

Challenging but fun at the same time. I liked it :)

Submitted
Cat Food For One
LikeReply
khoolahanDeveloper3 years ago

Very nice art and the concept is cool!

Submitted
Only One Shall Pass
LikeReply
khoolahanDeveloper3 years ago

Amazing strategy game! I had a lot of fun.

Submitted
The Only Platform
LikeReply
khoolahanDeveloper3 years ago

The animations are too cute ! I really like the duck buoy and the small boat ahah

great game, the music is so nice, do you play piano?

Thanks! :) no unfortunately not :P we found some really nice non-copyrighted music!

Wow! I love the design. At first I didn't quite understand what the adherence to the theme was but I can see where you're coming from. The design is 10/10 though! Great job!